The outgoing lord chief justice today admits that his last year in office has been the toughest, as ‘nine years of austerity’ continue to take their toll on the justice system. Lord Thomas of Cwmgiedd also urges the government to think hard before implementing further reforms of legal services regulation, highlighting concerns that the ’public interest too often gives way to the consumer interest’ in decision-making.

Lord Thomas, who will be succeeded by Sir Ian Burnett on 1 October after four years in the role, reflects in his last annual report on what he leaves behind. ’My final year office has, in many ways, been the most difficult,’ he says - alluding to Brexit and its challenge to the position of English law and courts; access to justice; and judicial independence following the ’enemies of the people’ furore.

’The effects of nine years of austerity, retrenchment and other significant reductions in the provision of resources have made the task of delivering justice ever more difficult,’ he adds.

Thomas says the £1bn courts and tribunal modernisation programme is ‘well on track’, highlighting the importance of digitisation and artificial intelligence in strengthening access to justice. While predicting that a new round of court closures is ‘inevitable’ to address a surplus in the courts estate, he bemoans the ‘dilapidated’ state of many buildings. A significant number are in ’very poor condition, requiring immediate maintenance work’, he says, adding that the upkeep of the retained courts estate is ‘vital’. 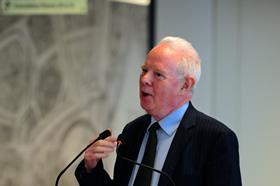 Thomas also alludes to the problem of low morale among judges, as the Senior Salaries Review Body prepares to report next year on the judicial reward structure. ’Any failure to address the problem of pay and pensions will have a serious impact on morale and recruitment,’ he warns.

On criminal justice - a ‘real concern’ for the judiciary - Thomas says the fall in the number of cases appears to have been offset by an increase in complexity and length. He highlights growing concern about the number of longer-term prisoners and prison conditions for young people.

On the professions, Thomas reflects that debate continues about further reform of regulation and the legal services market. ‘Now more than ever,’ he says, ’it is critical that careful thought is given to any changes and that strong safeguards are put in place when changes are made. Most importantly, the highest standards of training and practice must be encouraged and the practitioner’s overriding duty to the court preserved so as to maintain the world-class reputation of our jurisdiction.

’There is a nascent concern that the public interest too often gives way to the consumer interest, which is itself too narrowly defined,’ he adds, echoing comments by the now Supreme Court president Lady Hale to the Lords constitution committee.

Thomas is relatively sanguine about the pre-eminence of London and the English courts post-Brexit. The ‘false perceptions of uncertainty’ caused by Brexit are being addressed, he says, adding that the English capital’s status as a leading centre for dispute resolution ’is being maintained’.

In the wake of the furore over judicial independence sparked by the Daily Mail’s notorious ‘Enemies of the people’ headline, Thomas also stresses that judges must not be subject to improper pressure nor their independence taken for granted.