The ramshackle nature of some court buildings is putting off lawyers from applying to become district judges, the lord chief justice has said.

Lord Burnett of Maldon told MPs that the state of certain courts in England and Wales was ‘frankly an embarrassment’ and that members of the public, court staff and judges should not have to tolerate it.

Burnett said the court estate required 'hundreds of millions' of pounds to be brought up to scratch and that a failure to invest properly was a 'material risk' to the prospect of reducing the case backlog.

He further suggested that solicitors and barristers who would otherwise be tempted to apply for the bench are being deterred because their working life would be so much less comfortable.

Speaking on Tuesday to the House of Commons justice committee, Lord Burnett said: ‘One of the things that worries me is that the district bench is disproportionately located in courts which are really not very good. One has got to be realistic about this – we are trying to recruit successful lawyers who will not have spent the last 10, 15 or 20 years of their lives in buildings where the heating might not work or the air conditioning might not work, or the roof or loos leak. 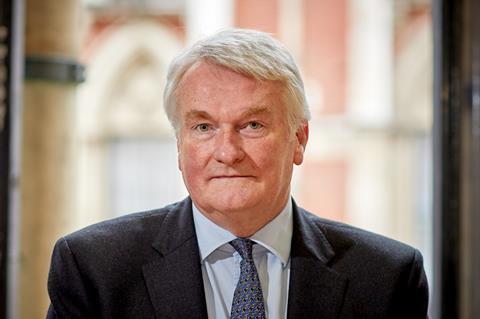 Lord Burnett: Recruitment issue one of the consequences of ‘degradation’ of the courts

‘Although that is not the universal picture it is too common. People coming from the legal profession are used to working in an environment where the IT works and where there is appropriate staff support.’

Burnett added that court users have been forced to wear coats and bobble hats inside the building when heating systems have broken down.

He said this recruitment issue was one of the consequences of what he called the ‘degradation’ of the courts and the under-funding in the court estate for many years.

Addressing the recent spending review and the extra funding allocated to the justice system, the lord chief justice said the political focus at the moment was on reducing the outstanding backlog of cases, but this ignored the connected issues about the court estate.

He added: ‘The shortfall in maintenance is something which has been recognised for years by government and yet the money necessary to deal with it – just to put the estate in a decent condition – has not yet been made available. Looking at everything that was said in the spending review documents I struggle to see where the money is for that, but I shall be pressing the lord chancellor nonetheless.’