A libel silk has been sworn in as president of the Queen's Bench Division, marking another milestone in the journey of women in law. Dame Victoria Sharp DBE succeeds Sir Brian Leveson, who retired last week. 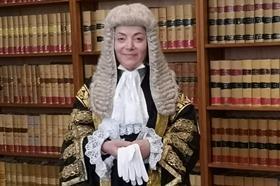 Dame Victoria sat alongside Lord Burnett of Maldon, the lord chief justice, Sir Andrew McFarlane, president of the family division, Sir Terence Etherton, master of the rolls, and Sir Geoffrey Vos, chancellor of the High Court at the ceremony in Court 4 of the Royal Courts of Justice in London. 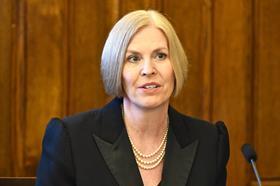 Talking about Dame Victoria's desire to become a lawyer, the lord chief justice told the poignant story of her late father writing to his 12-year-old daughter when he was working in the US, encouraging her in her ambition. 'He commended her on her eloquence and added that "one day you might become a High Court judge". That was a remarkable piece of foresight given at the time there was only one woman High Court judge,' Lord Burnett said.

Law Society president Christina Blacklaws commended Dame Victoria for becoming the first female president of the Queen's Bench Division. She said: 'While soon I hope there will be no more firsts for women to reach important positions in the legal profession, this should not take away from [celebrating] each and every time it happens. You have always been an amazing trailblazer.'

Lord Garnier QC, head of chambers at One Brick Court, where Dame Victoria practised as a barrister, said the day was 'bittersweet'. He told the ceremony: 'We are overjoyed and proud to be able to congratulate one of our own on her appointment as president of the Queen's Bench Division. That she should be the first woman to hold that office I suspect is a matter of delightful indifference. However, that joy at her success is tempered by the fact that our chambers closed its doors yesterday after nearly 150 years.'

Dame Victoria read law at Bristol University and was called to the bar in 1979. She took silk in 2001. Her judicial career began in 1998, when she was appointed a recorder. She became a deputy high court judge in 2008 and a High Court judge the following year. She was appointed a lady justice of appeal in 2013 and vice-president of the Queen's Bench Division in 2016.