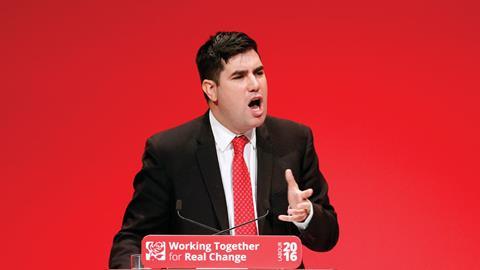 Abolishing employment tribunal fees and beefing up the legal aid budget were among the shadow justice secretary’s pledges at last week’s party conference.

It could hardly be anything other than a surprise to see a politician tell his party conference they should learn to love lawyers.

But last week in Liverpool, shadow justice secretary Richard Burgon – a former employment solicitor with trade union firm Thompsons – used his keynote speech at the Labour party conference to speak up for the legal profession. Burgon had started his week talking about the need to support the good work of lawyers, saying he would not have them ‘derided as fat cats or ambulance chasers’.

What followed in the days ahead was a series of platitudes – if not always policies – that may give elements of the profession reason to cheer.

The conference had been expected to receive the recommendations of a policy review commission led by former justice minister Lord Bach (Willy Bach).

Bach said he ‘made no apology’ for delaying publication by a year, having been inundated with suggestions for what Labour can do with the justice system.

‘It soon became clear, if we are to do the job necessary and deal with the issue with the seriousness it deserves, and come up with conclusions that are original and last the test of time, we need more time,’ Bach told a Society of Labour Lawyers event.

One policy was allowed out of the bag: the abolition of employment tribunal fees, introduced by the coalition government in 2013. Burgon said claims had fallen by 70% since then and doubted whether employers had become 70% better behaved during the same period.

‘I will never forget the first time I lodged a claim after the introduction of fees – I completed the form and waited to submit it online,’ recalled Burgon. ‘What flashed up on the screen was “customer please enter your credit card details”. I felt sick to my stomach.’

The Leeds East MP also poured scorn on the idea of conciliators from ACAS picking up the slack, saying officers were ‘merely acting as a go-between’ rather than helping claimants.

Labour insiders insist the pledge to scrap the fees is approved by the shadow treasury and the policy is supported across the party. Burgon’s predecessor Lord Falconer, not a Jeremy Corbyn devotee, told a fringe event organised by campaign group Justice: ‘Employment tribunal fees were plainly and explicitly a means to discourage claims. We must abolish them.’

What activists really crave – and it is a view the Labour leader is apparently sympathetic to – is more legal aid.

Bach, who faced criticism from some delegates about Labour’s record of starting the cuts before losing power in 2010, said he could make no promises about extra provision, although he stated that money must be found for inquests where the state is represented.

But Burgon, a close ally of Corbyn, was willing to let his guard drop once he stood in front of a partisan fringe audience.

The shadow justice secretary said: ‘Queues are snaking out of the door of MPs’ surgeries from people who don’t need to see their MP, they need to see a lawyer.

‘Everything that will run through our approach will be about returning to the vision of the [Clement] Attlee government, which placed legal aid as one of the four pillars of the welfare state. We have to avoid attempts to degrade legal aid and recipients of legal aid.

‘Of course we would put more money in the legal aid budget to give it the respect and finance it deserves.’

How much more money? He did not say. Neither did Labour have anything to offer on court fees, immigration fees, technology in the justice system, court closures and regulation. Even with prisons, which justice secretary Liz Truss will be expected to focus on this week, there were more problems than solutions.

Burgon’s keynote speech made clear England and Wales’ prison network is ‘overcrowded, understaffed and awash with drugs’, but there were few answers proposed, barring a pledge that ‘no longer will profit and privatisation drive policy’.

The party says in private that uncertainty over the leadership has put a block on any new ideas being fully costed and approved at the top level.

It will be a challenge to sell voters the idea of giving more money to lawyers. As noted by Shami (now Lady) Chakrabarti, Labour had ‘started the ball rolling’ on the rhetoric and attacks on the legal profession.

The party also prepared the ground for battle with both the government and media over the application of human rights laws.

Burgon promised the conference the party would fight Conservative plans to replace the Human Rights Act with a British bill of rights. The shadow justice secretary said human rights laws should apply to ‘all countries and actors in the theatre of war’ – a clear message that British armed forces will be expected to abide by laws and face consequences if they do not.

This remains an incendiary issue. Several media outlets have called for claims against soldiers to be dropped, with a Times columnist last week saying Britain has paid its troops the ‘ultimate ingratitude’. Prime minister Theresa May has pledged to close down the ‘industry of vexatious allegations’ against British troops over claims of abuse.

‘People produce examples of cases which it turned out didn’t succeed, but they are used to [remove] the ability to bring any case,’ said Burgon.

‘People shouldn’t forget the case of [torture victim] Baha Mousa and the firm which brought that case [Public Interest Lawyers]. If we believe in the rule of law, people need to be protected by the rule of law and accountable to it.’

The embrace of a policy that may be unpopular with many voters but will cheer members is an example of an approach that Corbyn’s opponents fear. Certainly, being the party of the legal profession will take some selling.

But there is no doubt that Labour has now put justice issues back at the centre of its plans. Burgon told the conference: ‘The next Labour government will have much to do. Ending austerity. Rebuilding public services. And delivering a fairer society. At the heart of this approach will be strengthening our justice system.’

But of course all that depends on there being a next Labour government.