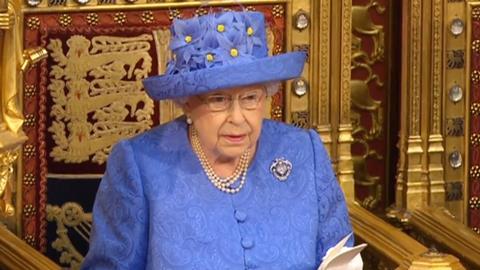 News focus: What made it into the Queen's speech - and what didn't

Courts reform and new curbs on personal injury claims are among the measures to have made it on to a slimmed-down legislative programme for the next two years. As expected, last week’s Queen’s speech was dominated by Brexit. Casualties of the cull of manifesto measures included the proposal to merge the Serious Fraud Office and National Crime Agency while legislation for prison reform, killed by the general election, will not be resurrected.

Measures that made it

The Courts Bill will pave the way for a new online court for civil claims as well as a controversial system for enabling online guilty pleas for certain non-imprisonable offences. It will also put an end to the direct cross-examination in the family courts of victims of domestic violence by alleged perpetrators. The bill will also attempt to tackle the looming crisis in judicial recruitment by ‘providing a better working environment for judges, allowing more leadership positions in the judiciary to be offered on a fixed term, and enabling judges to be deployed more flexibly’.

The Civil Liability Bill will revive the elements of the last parliament’s Prisons and Courts Bill aimed at curbing whiplash claims. In briefing notes accompanying the speech, the government said the bill would ‘tackle the rampant compensation culture’. It will ban offers to settle claims without the support of medical evidence and introduce a new fixed tariff of compensation for whiplash injuries lasting up to two years. The briefing notes state that the legislation will cut motor insurance premiums by £35 a year.

Meanwhile a Financial Guidance and Claims Bill will tighten the regulation of claims management companies, transferring regulatory responsibility to the Financial Conduct Authority and giving it the power to cap fees. The bill will also establish a new arm’s-length Single Financial Guidance Body to replace three existing providers of publicly funded financial guidance.

These measures will take forward elements of the former Prisons and Courts Bill, which ran out of parliamentary time before the election. However, prisons reform does not appear in the new programme. In his first public statement since taking up the post of justice secretary, David Lidington tried to head off concern about the omission with an open letter claiming that ‘essential’ changes are already under way to make prisons places of ‘safety and reform’.

‘Prisons have been going through a particularly turbulent time and we need to create calm and ordered environments for that effective rehabilitation,’ Lidington stated. He said it is his priority to reform offenders and support ex-offenders – including by offering education, training and support to help prisoners find employment when they leave (see leader, p10).

However, the Queen’s speech did have space for a Conservative manifesto pledge to create an independent public advocate to act for bereaved families after a disaster and support them at public inquests. According to briefing notes, the advocate will ‘keep the bereaved and surviving victims of disasters informed of progress in any relevant investigation and make them fully aware how they can contribute to that investigation’. The idea is to ensure ‘no individuals are sidelined’.

The proposal is listed as a ‘non legislative measure’, but the briefing notes say: ‘We will consult on the detail of our proposals.’

A draft Domestic Violence and Abuse Bill will propose the establishment of a domestic violence and abuse commissioner ‘to stand up for victims and survivors, raise public awareness, monitor the response of statutory agencies and local authorities and hold the justice system to account in tackling domestic abuse’. The bill will also define domestic abuse in law.

Another draft measure, the Patient Safety Bill will be published  to improve how the NHS investigates mistakes and encourage staff to share information freely. It will ‘embed a culture of learning and safety improvement across the NHS’ and ensure serious incidents can be investigated by an independent and impartial body ‘without the need for expensive, lawyer-led inquiries where that is unnecessary’.

As expected the speech also promised a Data Protection Bill to replace the existing Data Protection Act and  bring domestic legislation in line with the EU General Data Protection Regulation, which comes into force next May. Among its provisions will be a ‘right to be forgotten’, allowing young people reaching the age of 18 to demand that social media platforms delete information held about them. Another provision likely to be heavily scrutinised will ‘allow police and judicial authorities to continue to exchange information quickly and easily with our international partners in the fight against terrorism and other serious crimes’.

A Goods Mortgage Bill will implement recommendations from the Law Commission to update Victorian-era law on borrowers who have taken out a mortgage on goods that they own, such as their car (a ‘logbook loan’).

Other measures include an Automated and Electric Vehicles Bill which will extend compulsory motor insurance to automated vehicles; a Space Industry Bill creating new powers to license a wide range of commercial spaceflight; a High Speed Rail (West Midlands – Crewe) Bill to enable the next stage of the high-speed rail network; and a Draft Tenants’ Fees Bill to outlaw the charging of ‘letting fees’.

However the programme will be dominated by the Repeal Bill to repeal the European Communities Act, ending the authority of EU law in the UK and ‘providing a functioning statute book’ on the day the UK leaves the European Union. It will be complemented by legislation to establish national policies on immigration, international sanctions, nuclear safeguards, agriculture and fisheries.

Commenting on the Queen’s speech, Law Society president Robert Bourns said the task of unravelling and redefining ties and laws made over 40 years would be one of ‘real complexity’. He hoped that the series of bills would receive the parliamentary scrutiny it deserves.

On other measures, Bourns welcomed the focus on protections for what he described as ‘the most vulnerable in our society’.

Plans to continue with reforms to modernise the court system and reduce personal injury claims met with a more guarded response, with Bourns warning that care will need to be taken to ensure that justice is not diluted as it is modernised.

And the Society was disappointed by the government’s decision to revive ‘misguided’ reforms to whiplash injury claims. ‘It will be a clear injustice if the government persists with denying essential legal advice to those injured through no fault of their own – if the government is truly committed to targeting fraudulent claims, it should do just that,’ Bourns said.