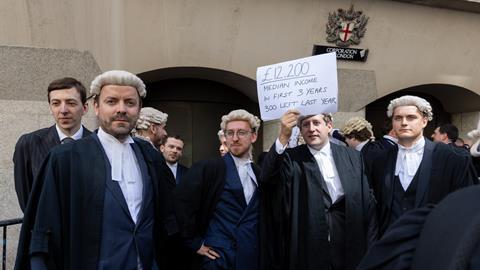 Sanctions on strikers 'could be unlawful'

Punishing barristers for participating in strikes could be unlawful, the Criminal Bar Association has asserted in the latest twist to the dispute over legal aid rates.

Practitioners were alarmed to discover last week that the lord chief justice had issued guidance to judges stating that all cases where there is non-attendance should be referred to the senior presiding judge’s office to consider whether to involve the Bar Standards Board.

After receiving legal advice, the CBA revealed yesterday that article 11 of the European Convention on Human Rights affords a barrister observing ‘days of action’ a defence to an application for wasted costs or disciplinary action.

A summary of the advice states that participating in ‘days of action’ is likely to be a form of association fully engaging article 11.1, which protects every person’s right of association, including (but not limited to) the right to join a trade union and the right to strike.

Statements from the lord chief justice and Bar Standards Board did not refer to the judiciary or regulator’s obligation to act compatibly with article 11.

‘In light of these omissions, it would be reasonable for barristers contemplating observing the “days of action” to be cautious before taking the LCJ’s and BSB’s statements at face value,’ the summary states.

The lord chief’s statement prompted dozens of QCs to publicly assure junior barristers worried about striking that they would have their backs. Hundreds joined picket lines outside several courts across the country on Monday.