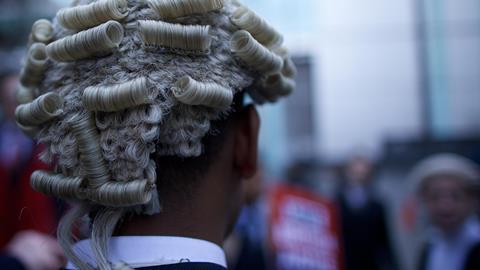 Hundreds of barristers have voted to go down the most drastic route for escalating their legal aid action – no court attendance, no new instructions and no returns. Starting on Monday, placard-bearing barristers will gather outside the Old Bailey and Crown courts in Birmingham, Manchester, Leeds, Bristol and Cardiff. Solicitors have been encouraged to join them on the picket line.

In a statement entitled ‘non-attendance at court by members of the bar’, the lord chief told judges that cases in which a communication is received from any member of the bar that they will not be attending court because of the CBA’s ‘days of action’ should remain listed.

‘Judges should seek an explanation in open court as to the current position. If an instructed barrister does not attend, the judge should ask the defendant, if present, whether they have discussed the matter with their barrister and whether they have agreed to their barrister’s non-attendance. It will be a matter for the CPS in each case to decide whether to make an application for wasted costs.

‘All cases in which there is non-attendance should be referred to the senior presiding judge’s office to consider whether to involve the Bar Standards Board. The question whether a failure to attend amounts to professional misconduct will then be a matter for any disciplinary process.’

Asked about the statement, which was widely shared on Twitter, a judiciary spokesperson said: ‘The lord chief justice has issued a statement to judges reminding them that the judiciary is not a party to the dispute between the Criminal Bar Association and the government. The judiciary will not enter into the substance of the dispute.’

The Bar Standards Board issued a statement on barristers 'deliberately' failing to attend court.

The BSB said: 'Barristers who are not already instructed to appear at a hearing and who wish to refuse to work on a particular day or for a particular period are in general free to do so. Therefore, in principle, barristers can book a day in their professional diary as unavailable because they wish to participate in a protest on that day. However, a barrister who is already instructed in a matter must carefully consider any duties that are owed to the court or the client before making themselves unavailable.'

It added: 'Any barrister seeking to rely on a client consenting to their absence from a hearing should be prepared to demonstrate that the client gave the consent on a fully informed basis and was made aware of the potential consequences of doing so, which might result in very severe harm to the interests of the client. Any failure to attend court might have further serious consequences for the administration of justice or the interests of third parties.'