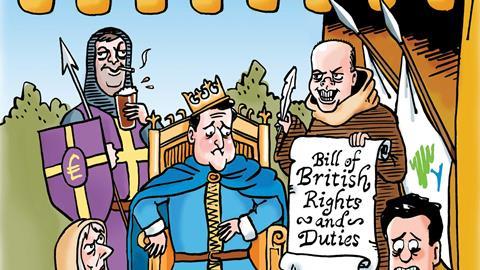 It befell in the days of Dave Lackland, when he was King of all England, that the realm was torn by civil strife. The exchequer was drained by the cost of Crusades to the Levant and hastily arranged goodwill visits to becalm treacherous Picts.

Sick-houses were overflowing and injustice was rampant. The mean huts of the mendicant hordes were judged too capacious for those who wouldst not mount an ass and look for work.

In the forest, hirsute outlaw Russell Hood and his unmerry men (Little Jones) pledged to rob the rich and, er, ‘don’t press me on details, mate, I don’t do graphs’.

By the year 2014, the Barons, led by the Lords of Derry St, of Brecqhou and of Wapping, were revolting. They marched on the capital under the purple standard of Nigel de Corduroy-Barbour, demanding to be freed of foreign tyranny, especially of the Court of Strasbourg.

King Dave called for his loyal and learned adviser, Lord Grief the Good. ‘Faithful attorney,’ said the King. ‘We need to buy off the barons and stop our sheriffs being made fools before the courts. Run me off a quick law!’

His lordship demurred. ‘My Liege, did we not learn under the reign of King Tony that we pass hasty constitutional reforms at our peril?’ At that the King became choleric and cried: ‘Treachery! Will nobody rid me of this turbulent attorney?’

Good Grief did cry ‘sanctuary’! So knightly retainers girded their loins and escorted the attorney to his club, since he was of the old school. ‘Sanctuary much!’ quoth he.

King Dave then turned to his Lord Chancellor, Graylag, a man of cunning though (it was said) little book-learning. ‘And what of you, Earl of Epsom & Ewell, are you too about to tell me the devil is in the detail?

‘Heaven forfend, my Liege,’ Graylag replied, ‘I have a floor-full of lawyers at my bidding.’

So Graylag sent for the Loyal Treasury Solicitor, who staggered into the Great Hall, weary from defending His Majesty in the court of judicial review, and commanded him to draw up a Great Charter of Rights & Responsibilities. ‘No rush, so long as I can have it by tomorrow lunchtime,’ Graylag ordered.

‘And do you wish me to impale a broom handle up my fundament so I can sweep Whitehall at the same time?’ the goodly civil servant asked.

‘Why yes,’ replied Graylag. ‘That is exactly the kind of private sector initiative we seek in the Government Legal Service.’

Fortunately, wiser counsel prevailed and the Great Charter was drawn up by the king’s henchmen, and sealed with solemn ceremony by the Thames. It opened thus: ‘TO ALL FREE MEN OF OUR KINGDOM (and their lady wives, calm down dears!) we have granted, for us and our heirs for ever, all the liberties written out below.’

But the barons were much displeased, chorusing: ‘This doesn’t look much different to what we had before.’

‘Haste ye to the small print,’ said Graymatter – these are BRITISH liberties. Take heed of this paragraph here about Premier League football seven days a week and keeping judges in line.’

Lackaday and rue, it came to pass that King Dave died of a surfeit of knives in the back and young Milly II succeeded the throne, to the astonishment of everyone, not least himself. Great harmony ruled for about five minutes, ‘til legal aid was again laid waste by great Slaughter.

As he held an onion to his eyes, Slaughter and the new royal court were jolted from their reverie by the skirl of distant pipes. Yes, it was the Picts, led by the great chieftain Sturgeon of Holyrood.

So Milly’s government did pass (Jim) Murphy’s Law, squeezing castle owners ‘til their pips squeaked and handing the cash to crofters in Old Aberdeen.

‘Outrageous,’ cried Graylag: ‘What about my yooman rights, eh?’ And he made haste to Runnymede, to hear the whispers of the reeds. But there were no reeds left, only a sign saying ‘Big Balls is watching you.’

‘Gadzooks,’ the old Chancellor said, ‘I don’t remember that, but I was never one for small print. Does anyone know a good lawyer?’