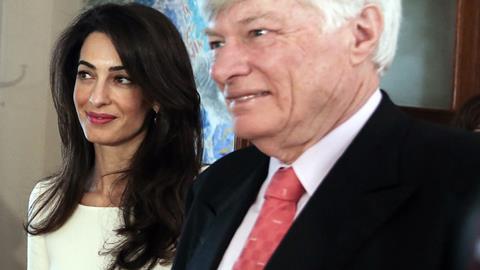 But suggestions in the Daily Mail this week that the Doughty Street Chambers tenant owes her success at the bar to her high-profile marriage have not gone down well with Clooney’s chambers.

In a widely circulated press statement responding to the article, Doughty Street Chambers’ head Geoffrey Robertson QC thundered ‘any suggestion’ that Clooney’s success at the bar ‘is a consequence of her marriage is demonstrably false’.

Before joining the chambers five years ago, Robertson said Clooney had done 10 years of ‘exceptional work’ in international law.

Before her marriage, Clooney was a senior adviser to Kofi Annan when he was the UK special envoy for Syria, and was counsel to a UN inquiry into the legality of drone warfare.

‘She had represented parties at the International Court of Justice, including the government of Cambodia in a border dispute with Thailand,’ he continued.

‘She had acted for Julian Assange and for the former prime minister of the (sic) Ukraine, Yulia Tymoshenko. She also worked with the former legal adviser to the foreign office, Sir Frank Berman, who has described her as “a first-rate lawyer”. It was because of her conspicuous ability as an international lawyer that the attorney general appointed her in 2013 - before her marriage - to serve on his panel of experts to advise and represent this country.’

Robertson is normally a robust defender of press freedom, but Obiter suspects his patience is wearing thin. Still if any defamation action ensues the tabloids will have more excuses to run photos of their favourite human rights lawyer.