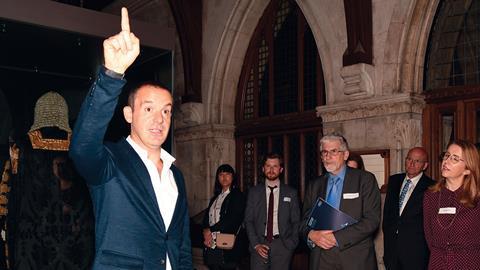 Martin Lewis of Moneysavingexpert grudgingly take up his new role as patron of the Personal Support Unit.

To the Royal Courts of Justice’s costume gallery to see a genuine black cap and – more importantly – consumer champion Martin Lewis of Moneysavingexpert grudgingly take up his new role as patron of the Personal Support Unit (PSU).

Why grudgingly? Surely the PSU, which supports teams of trained volunteers around the country to provide emotional and practical support through the civil court process, does an outstanding job? Certainly demand for its services has never been greater: in 2017/18, the unit helped clients on 65,456 occasions, up 17% from the previous year. Current ambitions include expanding beyond its current 23 locations and developing a telephone helpline service.

Lewis told an audience including PSU founder Lady Copisarow and Law Society vice-president Simon Davis that he is a huge fan of the unit’s work. His gripe is simply that it is needed in the first place: it should be the state’s job to ensure that no one should have to face court alone, he said. He pledged to act as patron until that vision is realised. Obiter suspects he will have a long wait.

Incidentally, we were pleased to note a dozen law firms listed among the PSU’s corporate supporters. It would be nice to see more.