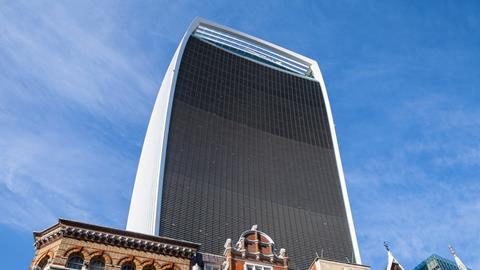 Cursed with a carbuncle

Spare a thought for 300 or so DWF workers who have today discovered they spend their days in the worst building in the country.

The Walkie Talkie (20 Fenchurch Street, London) has won the Carbunkle Cup from Building Design magazine, with the publication saying ‘its crimes read like a furious police charge sheet of bad architecture’.

The 38-storey skyscraper has been blamed for burning parked cars and creating enough wind to knock over pedestrians.

It’s a far cry from the DWF press release just over a year ago, which proudly announced it had moved into the Walkie Talkie and leased all of the 32nd floor and part of the 31st.

Managing partner Andrew Leaitherland said at the time of the move: ‘As well as a central City location close to some of the firm’s major clients, 20 Fenchurch Street offers an exceptional working environment. It’s a flexible space designed to encourage agile working, teamwork and great client interaction.’

Still, there is one consolation for those traipsing to work in the worst building of the year: they’re the only ones in London guaranteed not to see it.