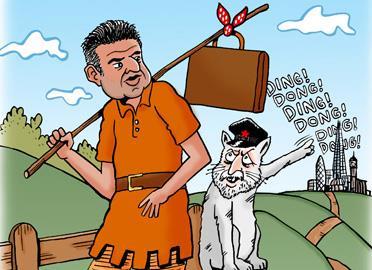 Dick Sadiqkhan and his Cat

Obiter Productions presents an inclusive pantomime in one act.

Dick: A humble solicitor who dreams of bigger things

Corbie: A cat who just dreams

Scene 1: A solicitors’ office on the edge of LONDON, a town in Merrie England. Dick is hard at work at his desk

With landlords in Tooting

On the high road of Peckham

Please will you pay me

DICK: Sigh. So much for the glamorous life of a high street solicitor in south London. When will I really make my mark?

Enter WOOLFIONA through trapdoor, to ‘Fanfare for the Uncommon Woman’

DICK: You ain’t nuthin’ like a dame – where’s your blowsy costume and green makeup?

WOOLFIONA (sternly): I’m not that sort of Dame. Look out of the window. What do you see shining out over the City?

DICK: She’s beautiful! Who is it?

WOOLFIONA: That’s Lady Justice. But to win her over, you will have to be more than a high street solicitor. You’ll have to go to… Westminster!

DICK: Pass me my bundle on a stick!

WOOLFIONA: Northern Line from Colliers Wood, change at Waterloo (disappears through trapdoor in puff of smoke)

DICK: Well, guess what, kids? I made it! And I backed the right man in Ed Merrieband

DICK: Soon we’re going to be able to start passing new laws! All together now for a resounding majority: ‘Ding dang ding dong, Grayling will soon be gone!’

‘The People’s Ed is deepest red,

But with the voters he had no cred!’

DICK: Curses, confound those voters, why don’t they ever sing along? It’s the backbenches for the next five years. Hey ho, off to the wilderness

Scene 3: Halfway up Brixton Hill (a wilderness of unaffordable houses). Enter CORBIE, a cat who got the cream

CORBIE: Team up with me, I never worry about the voters

DICK: You mean you’re from – Islington?

DICK: Sorry, that was catty! OK – you’ll get my nomination

CORBIE: I can bring in a new kind of politics!

DICK: What’s wrong with the old kind, we were in power for 13 years (Makes to leave)

DICK: What, the bells?

Mayor you could become

(but we’re not sure about your chum)’

DICK: That’s funny. What did they mean about my chum?

Scene 4: The steps of City Hall

DICK: Right kids, let’s get this mayoral campaign on the road!

DICK: Corbie, show the people what we’re made of – start killing rats!

CORBIE: Sorry I’m not happy about that. I think it would be dangerous and counter-productive. The rats should be taken into custody and arraigned before a court of law. Only following meticulous due process should … (continues at some length)

DICK: Why? Just because I’m not a posh boy?

ZAC: Not at all, old chap – but ask yourself when the last solicitor rose to high elected office in England

DICK: Hmm, I see your point

ZAC: Shall I tell you about your future?

ZAC (loudly): It’s behind you! (exits stage right [not left], with an aristocratic cackle)

WOOLFIONA: May the best man win! Well, a man is going to win anyway

DICK: That reminds me, Dame Woolfiona, why is it always you they turn to for a credible female character? Surely thousands of women reach the top in the City?

WOOLFIONA: Come on, even in a panto we can’t be too far-fetched! Music!

ALL: ‘Here comes the iPhone to light you to bed

And here comes the lord chancellor to abolish legal aid!’