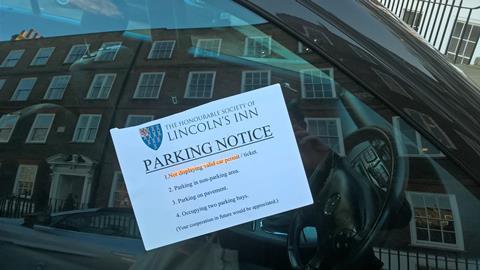 Imagine, you pay some faceless bureaucracy with blue and yellow branding a hefty amount of money year after year just for the privilege of being in. You would hope, maybe even assume, that they will extend a deadline for you when you need a bit of extra time to sort yourself out.

Then comes the shock discovery that they are having none of it, even though they want ‘cooperation in future’.

Obiter refers, of course, to parking arrangements at Lincoln’s Inn – with Inner Temple, surely first-equal in the ‘world’s most salubriously-appointed car park’ list. On Thursday, a polite crack-down operation was in place, with Masserati, Range Rover, Mercedes and Jaguar owners among those returning to their cars to find laminated notices attached to their windows. Obiter counted 21.

The reason? A close inspection revealed that each bestickered car was still sporting a 2018 parking permit, and the transition period to 2019 is over.