The mildewed window frames of Obiter Towers were set rattling on their hinges last Wednesday as 100 aircraft roared low over legal London in impressively tight formation. 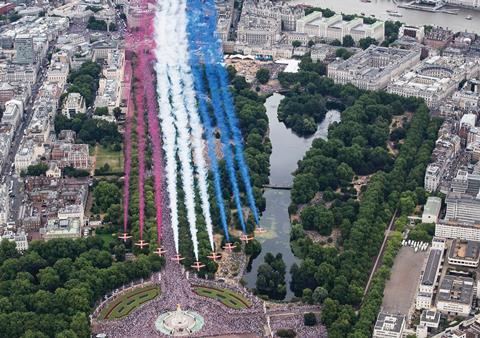 As this scurrilous organ is still in print, observant readers will have guessed the event did not herald a military coup, as social media wags surmised. The flypast was held to celebrate the RAF’s 100 birthday.

Gazette hacks were not alone in stopping work. Wigs were knocked askew and noses pressed to windows at the Royal Courts of Justice. And many on the flightpath at firms including Wedlake Bell, Bates Wells Braithwaite and Hogan Lovells also downed quills to have a good gawp (deduct one six-minute unit). It’s not every day you hear the feisty growl of second world war Merlin engines overhead.

But did some firms with roof terraces miss a trick by not asking clients round specially? Obiter is put in mind of a tactic employed by some law firms that benefit from a view of London’s iconic Tower Bridge. Such firms are, as a courtesy, in receipt of the bridge’s timed schedule for raising and lowering the middle section of road to allow ships to pass through. One wheeze is to hand clients from abroad a glass of fizz and invite them out on to a terrace or balcony with a view of the bridge saying: ‘We’ve organised something quite special for you!’

One for the 110th anniversary of the RAF, perhaps. That’s assuming we still have an airforce (and not just an elastic band and some balsa wood) after two decades of austerity.