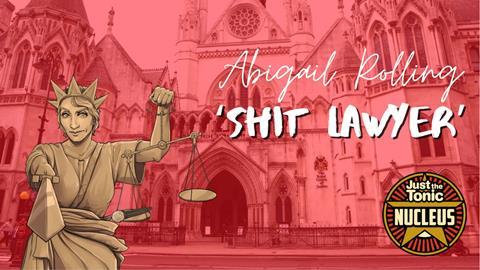 From court to comedy: the lawyer preparing for Edinburgh bow

A criminal defence solicitor with 30 years in the job is turning her experiences into comedy – and embarking on her debut show at the Edinburgh Fringe.

Abigail Rolling has secured a coveted spot on the fringe programme with her self-deprecating 60-minute show ‘Shit Lawyer’, lifting the veil on the world of criminal justice and dipping into years of dealing with cases coming before the magistrates and Crown courts.

Abigail also wants to use her platform to highlight the problems affecting the criminal justice system, attack the ‘fat cat lawyer’ myth that has emerged in the last 20 years and make a clarion call for change – all to an audience not normally concerned with legal matters.

‘I’ve been a criminal defence solicitor for 30 years and decided this was the time to give it a real go,’ she said. ‘The magistrates court is such a rich stream of drama and comedy that is completely untapped.’

Abigail has been doing stand-up for two-and-a-half years and this will be her first Edinburgh show. She remains a consultant with a firm in Yorkshire but has cleared her diary for August to do a three-week run, starting from 4 August at Just the Tonic’s Nucleus venue. With the cost of a fringe residency so high, and the show entirely self-funded, she has raised £2,250 so far through crowd-funding to help with costs. Warm-up gigs start at Halifax’s Stod Almighty comedy club on 21 June, with more planned before August in different venues.

Tickets for the Edinburgh show are available here: Just the Tonic Edinburgh.