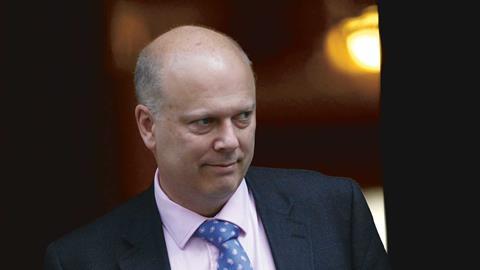 Rarely does a House of Lords Constitution Committee meeting attract a full house, but it was standing-room only for Chris Grayling’s appearance last week to talk about the role of lord chancellor. The attraction, of course, was the prospect of a ringside seat as the politician and former TV executive was pummelled by the committee’s line-up of QCs, bristling with anger on behalf of the legal profession.

However, if the first non-lawyer to hold the post since the 16th century was nervous, he barely showed it. Aside from the occasional rock back in his chair, and slight harrumph when the questioning got tricky, it was a stellar performance from the lord chancellor. He even coined a new collective noun for the legal profession. When asked if, in the wake of a run of judicial review defeats, he was satisfied that he was receiving good advice, Grayling said: ‘I have an entire floor of lawyers.’

Indeed, the only visible moment of discomfort came in the committee corridor before the hearing. When the usher appeared to escort the minister and his ‘colleague’ into the committee room, Grayling had to clarify that the woman with whom he was deep in conversation was not a panicky MoJ minder but a veteran member of the national press.