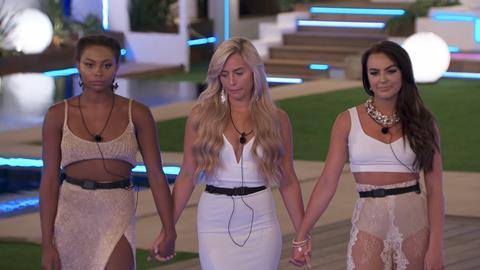 Many have tried to highlight the plight of legal aid lawyers, but few will have reached such an audience as newly-qualified solicitor Rosie Williams (pictured). The University of Law graduate, who was admitted only in March, gave up her job at a costs firm to enter ITV2’s Love Island show earlier this month.

The Welsh woman departed the villa on Friday, after new guy Sam chose Samira over her to 'couple-up with'. That, for non-followers of the show, is curtains for the odd one out.

Grilled on Good Morning Britain today, and introduced (apparently without irony) as a ‘dimwit’ by presenter Piers Morgan, Williams launched an impassioned defence of her decision to favour Love Island over law.

Morgan had asked: ‘You were a lawyer with a glittering [career]. What do your family make of you giving up this extremely successful law career to go and make yourself look stupid?’

Williams replied: ‘My family are very proud of me. I don’t think I made myself look stupid in there. I was working 18-hour days in a law firm getting sleepless nights – it is not as glamorous as it seems.’

Morgan, whose own qualifications had led him to interviewing Love Island contestants, pressed on with a hostile line of questions, suggesting Williams’s family would be ‘heartbroken’ by her life choices, asking what impact she could really now make on the world.

Williams was determined to fight her corner. ‘I did always in my legal career want to make a difference and wanted to go into criminal and family law, but there is no money in it right now. It does need to be completely revamped and looked at. So I ended up going into the civil and business side, which was not where my heart was. I feel like now I have a voice and have a large following I can make a difference with empowering women.’

Would she ever return to the law?

‘I have still got it and I can go back if I want.’