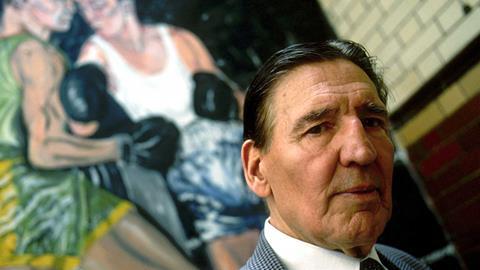 The death of ‘Mad’ Frank Fraser at the end of last month signalled the end of the Jack Spot-Billy Hill underworld era. Darlings of the press in their heyday, their exploits titillated readers of the Sunday newspapers. The comedian Tommy Trinder warmed up a Royal Variety Performance audience with jokes about Spot.

In the film Carlton-Brown of the FO when Ian Bannen is in a nightclub in a lounge suit, the manager wants him thrown out. Told Bannen is the King of Gaillardia he remarks, ‘I don’t care if he’s Billy Hill. Don’t take a cheque’.

After his final release from prison in the 1980s Fraser took his media career much further than either Hill or Spot, appearing in two films, numerous television commercials, cabaret in both the East and West End, and running a guided tour of gangland. Fraser’s career as a civil litigator is less well known. In 1959 he lost a libel action complaining that the Empire News had called him a grass. Would right-minded people think the worse of him for helping the police? Surely every decent citizen’s obligation, the judge asked the jury.

In the aftermath of the Parkhurst prison riot which he led in 1969 he and other prisoners were badly beaten by warders. He sued the Home Office and obtained damages in a settled action. The riot trial itself was something of a triumph for prisoners, exposing as it did the conditions in the prison at the time.

The authorities bit back. It was many years before prisoners were again brought to a public trial for offences committed in prison and so the equivalent of several years could be handed out by boards of visitors sitting in camera. In 1975 Fraser failed to obtain an injunction to halt a board hearing charges against him without his being represented (Fraser v Mudge and ors, The Times, 13 June 1975).

Lord Denning would have none of it. It had never been the practice in cases of prison discipline to allow representation. The intention of the legislature was that those adjudicating would themselves act fairly and see that justice was being done without the matter being held up and delayed for legal representation.

The requirements of natural justice did not make it necessary that an accused prisoner should be represented, said His Lordship ingenuously. Tempora mutantur.