No, really, delighted to be here 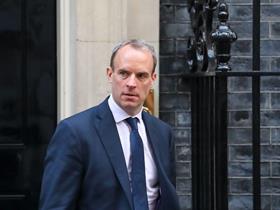 Given how much he had reportedly resisted a move from the Foreign Office to the Ministry of Justice, lord chancellor Dominic Raab probably hoped that his appearance before the justice committee might suffer the sort of delays he has inherited in the court system.

Alas, there was no putting off his hearing with the committee until 2023, and Raab took his seat for a grilling from assorted MPs last week.The first problem was they wouldn’t let him forget his job swap. Chair Bob Neill started by congratulating Raab on his appointment, to which he responded that it was a pleasure to be there. Raab’s face suggested otherwise.

Labour MP Maria Eagle sensed his discomfort, noting that Raab was reported as having seen the move as a demotion and fought against it. ‘I don’t think any of that reporting is accurate,’ sniffed Raab.

The justice committee is seen as a fairly soft touch, in the mould of the avuncular Neill. Lines of attack were only briefly pursued and Raab was even congratulated for his efforts in securing a few quid from the Treasury to rebalance years of funding cuts. When he responded with some flim-flam about technology being the solution to the crumbling court estate (a case management system presumably collecting water from the leaking roof), Neill agreed there was ‘no silver bullet’ and left it there. When the lord chief justice’s comment that court buildings were ‘embarrassing’ was brought up, Raab cryptically replied: ‘It is quite right we speak autonomously with our distinct voice.’

Warming to her task, Eagle asked whether the MoJ’s own forecast of reducing the backlog by 7,000 in three years was unambitious.

‘It won’t take that long to reduce it,’ Raab said.

Eagle pointed out it was the justice minister James Cartlidge who had used the 7,000 figure.

‘That is broadly accurate,’ backtracked the secretary of state, eventually.

Members were just about to pack up when Raab asked to say one more thing. Was this the moment he explained his vision for the modern justice system? No, he only wanted to mention how great the MoJ staff were. Given the average life expectancy of a justice secretary, that might be his one chance.