Southern England firm Blake Morgan may have hoped that the attention it garnered through its letter to embattled football club Dulwich Hamlet over the use of the club’s name would be short-lived. Not so.

Football fans are not known for their forgiving nature and it seems a campaign against the firm is still going strong in south London.

A tweet from a fan this week showed supporters holding aloft a (if Obiter may be so bold as to say so) rather well-designed flag bearing a large photo of Blake Morgan partner Daniel Kidd.

The flag quotes a blog from last year in which Kidd included the quote: ‘If you can’t be a shining example, at least be a horrible warning.’

Obiter is not sure what cryptic message fans are sending the firm but it’s safe to assume it’s not an invitation to an expenses-paid match-day experience. 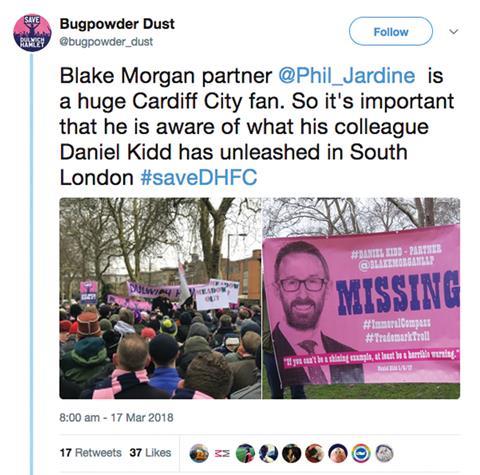