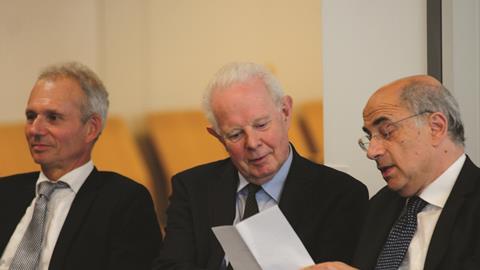 One of us: All smiles as Lidington courts top brass

The love-in between the new lord chancellor and the senior judiciary continues. Their latest assignation, witnessed by Obiter, was on the second floor of the Rolls Building, where David Lidington dropped by to endorse the rebranding of the courts of the Chancery Division and specialist commercial lists under the label of Business and Property Courts.

Sir Geoffrey Vos, chancellor of the High Court, set the tone by reminding the learned audience that Lidington had hit the ground running. The lord chancellor had made ‘great efforts to get to know lawyers and judges alike, something that’s been much appreciated in the legal community.

‘Can I say how much, lord chancellor, we are looking forward to working with you,’ he gushed.

A beaming Lidington responded with what was clearly intended to be clear blue water between him and his predecessor, enthusing about a ‘top-class independent judiciary’.

Speakers were even careful to avoid any jibes at the fact that Lidington is yet another non-lawyer.

Or were they? Vos observed that, within 100 yards of where he was speaking, people could be found who did not know what ‘Chancery’ means. Why, some are even ignorant of the term ‘chose in action’, he lamented.

The still-beaming lord chancellor gazed beatifically at the ceiling.