Red and Green should never be seen

Last week some law firms are understood to have shared police intelligence that Extinction Rebellion’s old fire engine, which sprays fake blood, had been spotted near the Blackwall Tunnel heading their way. Lawyers were warned to be vigilant or risk permanently despoiling the Armani. 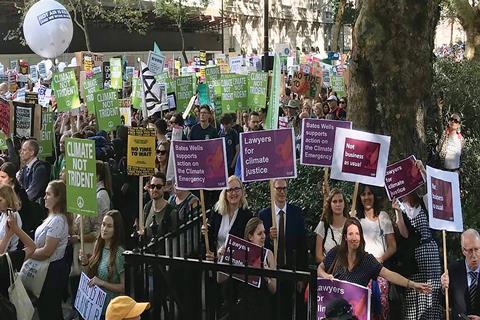 Sound advice, no doubt. Some days Extinction Rebellion have been almost as successful as Thames Water and the Highways Agency in bringing the capital to a halt. Obiter, though, finds a less fearful attitude at City law firm Bates Wells – styled a ‘purpose-driven’ business.

We hear that managing partner Martin Bunch emailed partners and staff after requests to join the recent ‘Climate Strike’. ‘We support the right of our people to join peaceful protests and to engage in non-violent direct action but expect our people to operate within the law,’ Bunch said. He suggested it could count as one of the volunteering days they are allowed under firm policy.

In fact, the firm even ran out of placards, which were all Bates Wells branded. ‘Please feel free to take the posters on the top of book cases to make your own placards,’ partner Rosamund McCarthy helpfully advised.

Attendees were at the heart of the demo and, for the avoidance of doubt, remained firmly on the right side of the law.