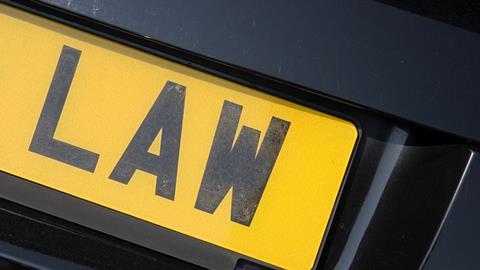 Stepping up to the plate

There you are, slicing through the free-flowing traffic of Chancery Lane, Fleet Street and the Strand in a Maserati, when you realise not everyone in the law will know you’ve made it.

The obvious answer is a personalised number plate, though a walk through the well-appointed car parks of the inns reveals that some working in the law thought of this first – dammit. There’s the Mercedes parked by Inner Temple that’s nabbed ‘A1 LAW’. And the owner of the Jaguar sporting ‘K7 BAR’ has surely got the rest of 7 King’s Bench Walk kicking themselves.

The necessity of including a number leads to some creativity (‘4’ for ‘A’; ‘8’ replacing ‘B’; ‘6’ instead of ‘G’). So be ye ever so high, you still can’t have ‘A JUDGE’, but there’s a Porsche Cayenne that sports ‘4 JOJ’ (Lord Sumption’s wheels?). And could the Range Rover in Middle Temple that’s incorporated ‘MI6’ into its plate belong to Max Hill QC, current independent reviewer of terrorism legislation?