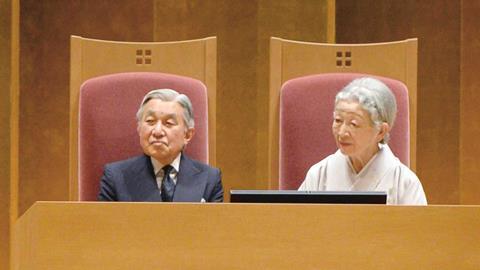 The empire sits back

Next time you are ticking the CPD box at some legal conference, imagine the Queen, the Duke of Edinburgh and the prime minister on stage simultaneously during the opening session.

That was roughly the experience of the opening event of the International Bar Association conference in Tokyo last week, which was attended by Emperor Akihito and Empress Michiko (pictured), and prime minister Shinzo Abe. Of course the IBA isn’t any old legal conference - this one pulled in 6,000 lawyers from 130 countries – but the VIP line-up was a remarkable coup.

For Obiter, accustomed to UK political big-wigs turning up slightly late, delivering a formulaic speech and then dashing off to meet ‘urgent commitments’, it was a revelation to see Abe sit through a lengthy address by the IBA’s president, magic circle firm Allen & Overy partner Michael Reynolds, and then go on to make a substantive speech himself. Even more so when it emerged the next morning that Abe had been dealing with a full-blown cabinet crisis – the resignation of his trade and industry minister.

Emperor Akihito kept his thoughts on legal matters to himself. However he did grant a private audience to Law Society president Andrew Caplen, which may be a first for both offices. Obiter understands that, as far as is possible given his constitutional role, Akihito is a personable conversationalist.

At least in contrast with his father Hirohito, who after renouncing his divinity in 1945 became widely known as ‘Mr Ah-so’ because that was about all he was ever allowed to say.