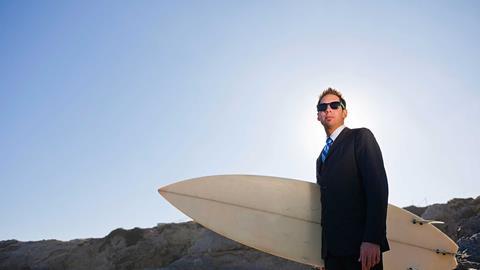 This month the business cards were officially reprinted to mark the merger of King & Wood Mallesons and SJ Berwin to create a $1bn global super-firm. Curious that an internal video has surfaced that appears to have cost less than a packet of fags.

To save your eyes from the horror, we’ll try to explain. A group of delighted-looking lawyers frolic in wet T-shirts on a rooftop swimming pool, complete with one of them in a lawyer’s gown being carried on a surfboard (we’re not making this up).

This bizarre footage is accompanied first by David Bowie’s China Girl (presumably because KWM has offices in China) and then the Benny Hill theme tune.

Given the video is dedicated to ‘defying stereotypes’, Obiter wonders how much the video does to defy the British stereotype by evoking images of scantily-clad women being chased by a dirty old man. Still, it got the Twitterati talking for a while, even if one commentator, David Allen Green, was moved to call it ‘simply the worst law firm video ever made’.