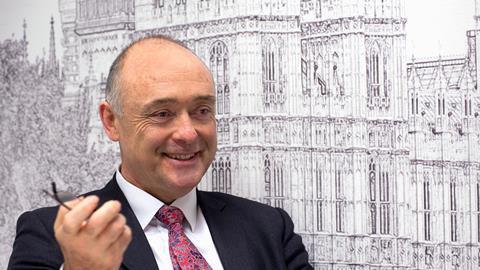 Chairman of the bar talks to Max Walters about the importance of public service and why the two branches of the profession must work together.

Criminal silk Andrew Langdon used his inaugural speech as chairman of the bar in December to relate his unusual journey to the leadership.

When Haile Selassie was overthrown as emperor of Ethiopia in 1974, Langdon’s parents were in the country working on a farm. The family was forced to flee at gunpoint and came to England as refugees. As Selassie did in the 1930s, they settled in the West Country (the emperor chose Bath); unlike Selassie, the family made the move with no money.

Langdon is still based in the region providing, he told his audience, a service ‘for those that need it’.

He attended a local school and then read law at Bristol University, but he had no intention of becoming a lawyer. However, after attending court he discovered his passion for advocacy and the ‘public service’ performed by barristers and the wider legal profession.

‘Few outside the profession think of the bar as providing a public service. In fact, our contribution to the delivery of justice is immense and largely unsung,’ he says. It is when that contribution is forgotten that ‘things go wrong; not just in individual cases but for society’.

A few weeks into his new role Langdon is keen to reiterate the importance of the work done by barristers – and solicitors. Both branches must come together, he argues, to ensure that the public service he so values is retained.

The common interests of the Bar Council and Law Society ‘absolutely coincide’, he insists – specifically on plans for a blanket extension of fixed recoverable costs, cuts to advocacy fee schemes and changes in technology which could see the court system partially morph into an online portal.

Turning first to fixed recoverable costs, a further review of which was announced before Christmas, Langdon alludes to the obvious access to justice issues for ‘those we jointly serve’. A blanket extension for all claims up to £250,000, favoured by Lord Justice Jackson, who leads the latest review, is in the pipeline.

‘The clue’s in the name, really,’ says Langdon. ‘It’s one-size-fits-all. The prospect of there being an extension of the sort that is potentially on the cards, both vertically up to £250,000 and horizontally across the spread, not just personal injury and motor claims, raises issues common to both branches of the profession.

‘Even if costs are necessary and reasonably incurred, they are liable not to be recovered. This has obvious consequences for those wondering if they can afford litigation.’

He adds: ‘The more difficult cases are more resource-intensive and there will be a disinclination to take on those cases, if we’re not careful. This skews the result in a way I don’t think is good for potential and deserving claimants.’

For Langdon, not enough attention has been paid to the efficacy of the systems currently in place for their mid- to long-term consequences to have been analysed – namely fixed recoverable costs in the fast-track and costs budgeting.

‘The impression I get is that solicitors and the bar have got cleverer, better and more nuanced in their understanding of how they can make costs budgeting work. An approach to a sensible way of trying to meet the public interest in keeping costs proportionate hasn’t really been given enough of a chance to develop or demonstrate itself.’

Langdon is working with the Society and its president Robert Bourns – ‘a friend of old’ with whom he shares ‘pretty much identical concerns’ – to address these issues.

Not wholly identical however; the two branches of the profession appear at odds over more recent proposals surrounding criminal defence advocacy fees.

Earlier this month, the Ministry of Justice said ‘outdated’ factors, such as the number of pages in a case, would no longer determine fees. Instead payments will be based on the seriousness and complexity of work. The scheme, last reformed in 2007, pays criminal defence advocates for representing those accused of crimes in the Crown court.

According to the MoJ, total expenditure on self-employed QCs would increase by around 10%.

The Law Society was quick to criticise, warning that junior barristers and solicitor-advocates will lose out while QCs would receive a pay hike. Langdon, however, says it is ‘misleading’ to speak of a 10% rise for QCs. ‘Actually, compared to where we were five years ago, we’re still considerably less well off in the more demanding cases,’ he says.

He believes the reformed scheme will actually amount to a hike in rewards for those that take on the ‘heaviest and most challenging cases’, which will also apply to juniors: ‘The proposals will encourage good advocacy and the retention of advocates interested in a real career as criminal advocates.

‘It’s my focus to ensure that if this scheme comes in, we continue to make representations on behalf of both parts of the profession [solicitor-advocates and barristers] that there needs to be better investment in higher court advocacy.’

Langdon’s fondness for the work of advocates is clear– he speaks of their ‘oratorical prowess’, holding authority to account and, again, their role in providing a public service.

Asked whether he agrees with a recent claim by former justice secretary Michael Gove that solicitor-advocates provide a ‘second-class’ service and should be overlooked in favour of barristers, Langdon says it would be ‘unwise’ to generalise.

‘There are some extremely good higher court advocates, there are some extremely poor barristers,’ he says. ‘Having said that, we have no hesitation in pointing to the fact that our profession is about advocacy. That is how we’re trained – from our initial qualification, 12 months of pupillage, the chambers setup – the whole thing is designed to improve the best advocates and we’re very proud of that. We consider ourselves to be the bespoke advocacy branch of the profession.’

Returning to fees, Langdon offers a reminder that there are still lingering concerns about a potential 8.75% cut to the litigators’ graduated fee scheme. The second fee cut was suspended for a year last April.

Promising to oppose the plans ‘at every opportunity’, Langdon says that through his work as a criminal practitioner, he can see that many solicitor firms are ‘barely surviving’. ‘The nature of their work is important, not just for the criminal justice system but for society,’ he says. ‘These are firms of solicitors working in some of the most difficult and deprived areas of the country. They’re actually part of the fabric. If you knock them out by continuing with cuts you will cause untold problems, not just in the criminal justice system but elsewhere. This will end up costing much, much more.

‘I’m fervently hoping that the government can be persuaded not to make this additional cut. It will do no one any favours. It won’t do the criminal justice system any good and it won’t do society any good. It will be a very short-sighted step.’

The prospect of further cuts and uncertainty comes amid plans for a £1bn court modernisation programme.

If implemented, the MoJ’s proposals could see some hearings dealt with entirely online, with courts and judges required to embrace new technology.

Langdon says that although ‘some form of online process would be beneficial’, it is important not to ‘overstep the mark’.

The plans, announced in September, would see defendants in less serious cases plead guilty online. A new online court for monetary claims of up to £25,000 was also proposed by Lord Justice Briggs in July. ‘Simply because it is technologically possible to have virtual hearings, of one sort or another, it doesn’t necessarily mean we should have them,’ he warns.

‘So completely routine directions, where people have signalled, in advance that there’s to be no argument, then obviously it’s unnecessary and a waste of time for everyone to turn up. But I think the default position should be that a hearing is in court, unless a judge has decided that it shouldn’t be.’

With root-and-branch reforms again on the horizon, what are his hopes for the future?

In his inauguration speech, Langdon said he wants to make sure his work in 2017 focuses on opening the door wider to ‘young, socially diverse talent, all of it undoubtedly in the public interest’. Now he adds: ‘We have a series of coincidences of interest between our two professions. I think we are going to achieve a great deal by cooperating.’