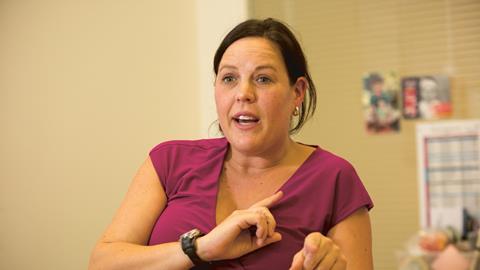 The Law Society’s in-house solicitor of the year works for a not-for-profit that loves to make a profit. Jonathan Rayner meets her.

The key features of a case that in-house solicitor Annemarie Roberts recalls as an ‘administrative nightmare’ were 300 archive boxes stuffed with papers relating to 773 respondents who collectively owed £7m in unpaid service charges.

Arguably, she understates the challenge by dismissing it as a mere nightmare. Just sending information to each of the respondents and collating their responses, for example, would have overwhelmed the eight-person legal department. Running the same case 773 times would have been the coup de grâce, she adds.

It sounds like everyone’s case from hell. Or is it all in a day’s work for the assistant director (income and legal operations) of One Housing Group, a housing association with 15,000 properties across London and south-east England? ‘It was the sheer size of the case that posed the difficulty,’ Roberts reflects. ‘The 773 respondents were all owners or tenants of One Housing properties and most were unrepresented by lawyers.’

The issue in contention, she continues, was a refurbishment bill that the residents were required to pay as a supplement to their regular service charge. This is quite normal where the cost of the refurbishment is significant and where the landlord, in this instance One Housing, has followed the correct procedure of serving notice on the residents and giving them the chance to be consulted on the proposed extra charge.

Such an unwieldy case required an innovative response. ‘We created a website to make distributing information to residents more efficient than laboriously sending messages to 773 individuals,’ Roberts says. ‘We also set up leaseholder groups so that we could engage with representatives from each group. And we stored and sent material electronically rather than making hard copies, which would have filled around 300 archive boxes. The property tribunal found in our favour, ruling that the residents were liable to pay the service charge.’

The approach won praise from former First-Tier Tribunal judge Lady Mary Wilson, who noted that during the tribunal proceedings Roberts displayed ‘enormous reserves of patience, good humour, skill and calm efficiency, all of which she provided most impressively’.

Such praise is one of several reasons why Roberts, due to start maternity leave for her second child just three days after this interview, won the Law Society’s excellence award for in-house solicitor of the year. ‘I’m absolutely honoured,’ she says. ‘I was up against colleagues from highly commercial [such as Virgin Money, Siemens and Citigroup] and charitable environments whom I admire and respect very much.’

Roberts was born and brought up in the wine-making, Afrikaans-speaking region of Stellenbosch, South Africa, around 30 miles east of Cape Town. She read business and law at Stellenbosch University, secured a training contract in Stellenbosch town and qualified in 2007. ‘I then moved to the UK to start a gap year,’ she recalls. ‘The plan was to finance some travelling around Europe by taking locum jobs and moving on. My first locum was with a magic circle firm as a paralegal and I was too terrified to open my mouth. My first language is Afrikaans and I simply didn’t know enough English. But I got by somehow and eight years later I’m still here.’

The locum jobs evolved into two and a half years as a solicitor at the London Borough of Greenwich before she joined One Housing in 2009 as legal team manager. ‘Six years ago I began managing a legal team of one solicitor and myself,’ she says. ‘I’ve since grown the team to three solicitors, three paralegals and two legal assistants. And on 1 October this year I was promoted to assistant director (income and legal operations).

‘When I first joined One Housing, most of the legal work was going out to external firms,’ she continues. ‘I wanted to prove that we could do the work better, but for less. We have achieved that by convincing other departments within One Housing that we understand the business and are an integrated part of the team. And so we now handle the conveyancing for One Housing’s average of 600 plot sales a year arising from our various new-build schemes. We provide leasehold property management services and are responsible for debt collection and property litigation, including service charge disputes.’

Does One Housing ever feel like a hard-faced, ruthless landlord? ‘Not at all,’ Roberts insists. ‘We focus on sustaining tenancies, not terminating them. We work hard at getting unemployed residents into work, whether it’s helping them with CVs or sending them on English language courses. Our help is increasingly required these days as more and more tenants default on their rent. This is a direct result of welfare changes, especially since the bedroom tax and benefits caps came in.’

The chief executive, Mick Sweeney, attended the party conferences ‘to make sure our voice was heard’, Roberts notes. ‘And we have had literally hundreds of face-to-face meetings with residents to explain the changes. We keep emphasising that we don’t want to go to court to evict anyone. If we reach that stage it’s because everything we have tried has failed.’

What else does the legal team do? ‘We also do all the work around stair-casing,’ she replies. This is part of the process involved in helping people on low incomes get on to the property ladder by offering them shared ownership leases. Leaseholders purchase, often with a mortgage, just a share of a property rather than the whole property. In addition to their mortgage repayments they then pay rent on the part of the property retained by the landlord. Subsequently, leaseholders have the right to purchase additional shares in the property until they own all of it.

This focus on philanthropy to achieve a social benefit, she continues, derives from housing associations’ origins in the second half of the 19th century. That was when a growing middle-class reacted sympathetically to the poverty of poorly paid workers and began directing their charitable efforts towards alleviating it through the provision of better accommodation.

Housing associations also came to prominence in the latter years of the 20th century following Margaret Thatcher’s introduction of changes to council housing. These changes allowed tenants to buy their properties at a discount, thereby vastly reducing council stocks of affordable property to rent. Councils were also prevented from subsidising their housing from local taxes.

Many councils subsequently transferred their housing stock to housing associations. The result is a modern housing association, such as One Housing, which sells properties and collects rents to generate a profit and then uses the surplus to provide further low-cost social housing. This is reflected, Roberts says, in One Housing’s ‘two-for-one business model’ whereby, for every two private flats it sells, it uses the profit generated to subsidise a social unit.

It is also reflected in One Housing’s motto: ‘We’re a not-for-profit that loves to make a profit’. Roberts says: ‘The more profit we make, the more we can plough back into the business. Although we’re a charity, we’re driven as hard as any purely commercial concern.’

Looking to the future, she says: ‘I love the work, but the future of housing associations is currently in the balance. The government plans to deregulate us so that we are taken out of the public and into the private sector. This means we will no longer feature as a £60m liability in the public accounts, which any deficit-cutting government would obviously like. Greg Clarke [the communities secretary] says that any such change will have no material effect on how we operate, but not everyone agrees with him. For example, membership of the public sector has made housing associations an attractive investment and improved our credit rating. If investors stop coming forward, our funding will dry up.’

As to other challenges, Roberts cites a compliance issue with the Solicitors Regulation Authority: ‘The SRA is increasingly turning its attention to the in-house sector as an estimated one in four of us now work not for law firms, but for companies, charities, local authorities, not-for-profits and other organisations. As a consequence, I’ve just finished a compliance guide for the whole of One Housing in which I have codified compliance into just one document.’

As the interview closes, Roberts turns to her Master in Business Administration (MBA) from the University of Bath. ‘I wanted to move from an exclusively solicitor function to being able to manage an area of the business and my legal team better,’ she says. ‘The MBA provides a good basis for gaining knowledge across all parts of the business, such as accounting, economics, marketing and operations, as well as offering elective courses that allow you to follow your own professional interests.

‘I’m never going to be an expert in human resources or finance, but the MBA has put me in a position to ask the right questions. It opens your eyes to how the whole business fits together.’

The everyday focus, she stresses, remains on the business: ‘I’m ambitious, I love what I’m doing and I’m looking forward to facing the challenges that my new role brings.’