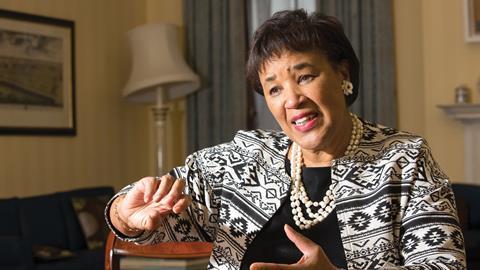 From a small Caribbean island to the House of Lords. The career of Baroness Patricia Scotland QC has been a succession of groundbreaking firsts. In 1991, aged 35, she became the UK’s youngest woman QC and the first black woman lawyer to take silk. She joined Labour’s benches in the Lords in 1997 as Baroness Scotland of Asthal, going on to undertake a major reform of the criminal justice system.

This included the introduction of the Domestic Violence, Crime and Victims Act 2004, which helped reduce violence against women and girls by 64%. ‘We were able to transform the multi-agency approach,’ she says, ‘from a dysfunctional process where agencies worked in isolation to a more streamlined approach where agencies work in a conjoined way.’

Scotland’s track record of firsts saw her in 2007 become the first female attorney general since the office was created in 1315. And more recently, on 1 April 2016, she became the first British citizen to assume the role of Commonwealth secretary-general. It is a huge responsibility. Around 2.3bn people live in the 52 nations that make up the Commonwealth.

What binds these disparate nations? The Commonwealth is a legacy of the British empire, of course, ‘but beyond that, they are united by a common language and by the same common law. Their parliaments are based on the Westminster model and their institutions are the same, or broadly similar, to ours’.

Scotland contrasts the Commonwealth with the EU. The latter, she notes, has 28 countries and 24 different legal systems. ‘Harmonising and getting these 28 states to agree is difficult,’ she says. ‘In contrast, the 52 Commonwealth states have much the same roots. Common law is the cornerstone of our democracies. Our lawyers are all trained in the same way and interpret law in a similar fashion. British common law and statutes have done more to unite than divide us, even if some of the member states are tiny in comparison with others or have struggling economies.

‘We also share a common sense of humour and an interest in cricket.’ Scotland plans to create a Commonwealth community cricketing cup which would become part of the Commonwealth Games. ‘Cricket teaches teamwork and camaraderie. It’s collaborative, with a clear structure. And mothers and daughters can play it, too.’

Innovations around cricket apart, how does Scotland see her role as secretary-general? ‘I want to put the wealth back into Commonwealth,’ she replies. ‘I want countries to tap the depth of all their talents. Women and girls must be properly represented and empowered. Nobody should be left behind. Fairness and the rule of law are the only way to develop sustainably. Along with tackling climate change, these issues are fundamental to my term of office.’

But, realistically, how can a body comprising some of the world’s smallest and poorest countries help reduce global warming? ‘The Commonwealth Heads of Government meeting in Malta (November 2015) unanimously agreed to commit to a programme to halt and reverse man-induced climate change. That’s one-third of the world speaking with one voice. It made the Paris agreement (December 2015) that much easier to achieve.’

The Paris agreement is the first universal, legally binding global climate deal. Signed by almost 200 countries, the key commitments are to try to keep the global temperature increase to a maximum of 1.5 degrees Celsius above pre-industrial levels; to limit greenhouse gas emissions to a level at which trees, soil and oceans can absorb them naturally; to review each country’s contribution to cutting emissions every five years; and for rich countries to help poorer nations by providing funding to help them adapt to climate change and switch to renewable energy.

Are Commonwealth countries particularly vulnerable to the effects of climate change? ‘Thirty of the Commonwealth’s 52 states are island states,’ she replies. ‘Rising sea levels are a particular threat. But everyone in the world will be affected by changes that we are already seeing. Unless global warming is halted, droughts will soon become more severe, global food supply chains will fail, migration will increase and we will experience more frequent catastrophic weather events.’

Dominica (the Caribbean island that her family left in the 1950s) was the victim of one such event in August 2015. She says: ‘In just a few hours, tropical storm Erika caused mudslides and flooding that halted decades of economic progress. People were killed, crops destroyed and the country’s one airport wrecked, which in turn hampered rescue efforts. The bill for repair and reconstruction was more than £150m – that’s around half the country’s gross domestic product. And that sum didn’t include rebuilding private houses.’

BORN Dominica. Emigrated (aged two) to the UK with her parents and 11 siblings in the 1950s

The Commonwealth Climate Finance Access Hub, which provides funding for states looking to rebuild after a storm or earthquake, offers some assistance for vulnerable countries such as Dominica. However, it is the programme of regenerative development unanimously agreed upon at the Malta Commonwealth heads conference last year that may hold the key to the world’s survival.

Regenerative development, which was discussed at a conference in London organised by Scotland last October, requires humankind to redefine its relationship with nature. Where development has traditionally involved extracting and processing resources to produce goods and structures, regenerative development calls upon us to trap carbon in an environmentally friendly way.

This can be achieved by, for example, using renewable building materials such as timber. Forests also absorb carbon dioxide, as do grasslands, wetlands and estuaries, all of which can be regenerated by reducing pollution and planting vegetation. Improved soil and consumer products made in an eco-friendly way also have a part to play. Such an approach to nature encourages biodiversity and produces biomass – renewable forms of organic material that can be a source of fuel or energy.

The Commonwealth’s initiatives to tackle climate change sound encouraging. Does Scotland have any encouraging words for the UK, the one European state that is a member of the Commonwealth and which voted to quit the EU? Do the other Commonwealth states view Brexit as all doom and gloom? ‘Some are concerned that their market access into the UK and Europe could be disrupted by post-Brexit trade policy shifts,’ she says. ‘Time will tell, but in the meantime the UK and other member states should put greater emphasis on harnessing the so-called Commonwealth trade advantage.

‘Essentially, this means taking advantage of our common language and laws to increase trade between member states. The advantage has been measured as a 19% reduction in the cost of trading when compared with trading with non-member states. This encourages increased trade. Building on that, I would like to see the advantage increase to 30%.

‘Also, Brexit adds a new strand to what was before a twin-track trading regime – the EU and the Commonwealth. There may now be an extra freedom for the UK to enter into individual trade deals with all 52 states.’

We move on to what many regard as Scotland’s most enduring legacy: curbing violence against women and girls. How was the surprisingly precise figure of a 64% reduction arrived at? ‘It was quite straightforward,’ she replies. ‘Using data from the British crime survey, we counted how many women and girls had been killed by partners or family members. We also looked at the numbers for grievous bodily harm and aggravated bodily harm, and how many of them had been reported or prosecuted. We then compared the most recent figures with those for previous years and found that the numbers were down by 64%.’

How did she engineer such a successful outcome? ‘More efficient case management and earlier intervention tipped the balance,’ Scotland says. ‘When someone is identified as being at risk, several agencies become involved, such as the police, social services, the local authority, welfare providers, doctors, lawyers and schools. Each of them does an excellent job, of course, but often there are overlaps. We tried to change that by encouraging the agencies to concentrate on their particular speciality. By pulling all that expertise together, we could identify high-risk cases immediately without lengthy case conferences delaying the victim’s escape from danger.’

What is the highlight of her work in that field? ‘Probably the familial homicide provision of the 2004 Domestic Violence, Crime and Victim Act. We introduced it to close the legal loophole that led to prosecutions being dropped because the husband and wife, for example, each accused the other of murdering or causing the death of a child or vulnerable adult in their household.

‘It couldn’t be proved beyond reasonable doubt who was the guilty party and under our law that means the case is dismissed. Our new law puts a clear legal responsibility on adults who have frequent contact with a child or vulnerable adult to take reasonable steps to protect that child or adult. If they fail to do so, they face up to 14 years in jail.’

Why the passion for countering domestic violence? ‘Because so many women are killed by partners or ex-partners. And because, according to the National Society for the Prevention of Cruelty to Children, one in four young people aged 10-24 report that they suffered domestic violence and abuse during their childhood,’ Scotland replies. ‘Some 89% of women prisoners have been victims of domestic violence, as have two-thirds of young offenders.

Many develop mental health problems and alcohol and drug addictions. It all costs the UK economy £15.7bn a year, according to University of Lancaster research. It’s a scandal.’

Has the momentum of reducing levels of domestic violence been sustained under the coalition and Tory governments? Scotland is non-committal. ‘I couldn’t say – I haven’t checked the figures.’