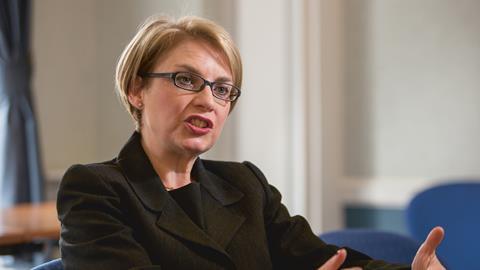 Ignore conventional wisdom about a legal career, Clare McConnell tells Jonathan Rayner – be prepared to move on and up.

This should not, she says, be seen as flitting from one short-term role to another – instead it is driven by career ambition. She peppers her narrative with phrases such as ‘pushing the boundaries’ and ‘the next big challenge’. McConnell is dual-qualified in Scottish and English law. She is curious about the contexts in which she works – even, while working on a rail infrastructure project, examining the underside of a train and sitting in the driver’s seat.

McConnell was also seconded for 15 months to HM Treasury, a prestigious appointment for a partner-level solicitor. She was chair of the Association of Women Solicitors 2009/10. And her latest venture is to found Fishpool Consulting, which provides commercial business advice to help clients procure and manage contracts more efficiently.

McConnell says her interest in the law was sparked by TV dramas Crown Court (1972-1984) and LA Law (1986-1994), and by Twelve Angry Men, the 1957 film classic starring Henry Fonda. The ‘cut and thrust’ of school debates cemented her nascent interest into a conviction that law was to be her chosen career. ‘I enjoy probing people’s arguments to reveal the facts,’ she says. ‘I am not an advocate, but in Scotland solicitors do more advocacy than their counterparts down here [in England].’

Viewed through the TV screen, she notes, ‘the perception of solicitors has altered over the years. We now see dodgy solicitors thwarting the best efforts of our gallant police officers by invoking spurious technical objections. But then it is only fiction.’

After completing a law degree at Dundee University, McConnell took up a three-year PhD scholarship at Bristol University, where she joined the academic staff as a lecturer. She lectured on constitutional and administrative law (her PhD subject), plus ancillary subjects such as English civil and criminal procedures.

Constitutional and administrative law governs the affairs of the state, she notes. The former concerns the relationship between the executive, the legislature and the judiciary. Administrative law, on the other hand, is the principal instrument for holding state bodies to account, for example by bringing judicial review proceedings against a local authority or government department.

While finishing her PhD, McConnell lectured on Public Law for a year at Lancaster University. ‘It was funny really,’ she says. ‘I was also asked to lecture on equity and trusts. Equity is a long-established central part of English common law, but it has never been absorbed into Scots law. Nonetheless, I found myself lecturing on the topic – but then I like a challenge.’ She took her doctorate while a trainee solicitor.

McConnell turned her back on academia, taking the Diploma in Legal Practice (Scotland’s version of the Legal Practice Course) at the University of Edinburgh. She then secured a training contract at Edinburgh firm Russell & Aitken before moving on to Maclay Murray & Spens, one of Scotland’s ‘Big Four’ firms. Next she sat the Qualified Lawyers Transfer Test, which until 2010 was the Solicitor Regulation Authority’s accreditation scheme for allowing solicitors who had qualified in a foreign jurisdiction to become England and Wales-qualified practitioners.

EDUCATION universities of Dundee and Bristol

Her priority on qualification was to get experience at firms where she was ‘able to look at constitutional and administrative law through the prism of how government policy functions in the areas in which I was working’. These areas, which would include work on the government’s Building Schools for the Future programme, as well as private finance initiative (PFI) funding of public infrastructure projects, were ‘very sensitive to political change’, she notes. The schools programme, for example, was scrapped by the coalition government shortly after the 2010 general election.

McConnell is ready to defend controversial PFI schemes, which critics allege lock the taxpayer into crippling long-term obligations. ‘Some health trusts have really benefited from upgrading their estates through PFI,’ she says. ‘And anyway, PFI is normally just a small part of a hospital’s overall debt. Patients have to be admitted to hospital and fed and cared for. If the wards are allowed to deteriorate, then a patient’s health and recovery can be damaged. PFI serves a good purpose.’

Apart from a one-year stint in-house (in 1999, at Post Office Legal Services), there followed years in City and international firms. At international firm Simmons & Simmons (1997-1999), McConnell worked on the Railtrack account. Like PFI, she observes, ‘transport is highly politicised’.

In this period she also worked on Thameslink, a 68-station main-line route running north to south through London from Bedford to Brighton, and serving both Gatwick and Luton Airports. It opened in 1988 and is now investing £6.5bn in extending the service to a further 100 stations. That part of the scheme should complete in 2018.

Post Office Legal Services followed, then City firm Berwin Leighton Paisner (BLP) – the role that took her under a train. ‘The train was on a ramp and, unlike the very tall BLP partner who accompanied me, I found it easy to squeeze into the pit,’ McConnell recalls.

‘We were there to inspect a piece of kit called a train-wheel interface. This is operated from within the driver’s cabin and used when the wheels cannot get sufficient traction on the railway line because of leaf fall. Or because of “leaves on the track”, as long-suffering commuters know the problem. The kit sprays sand in a liquid solution on to the track, removing the slippery coating of squashed leaves and stopping the train’s wheels from simply skidding on the rails and not getting enough traction to make the train move.

‘It was cutting-edge technology and we were required to draft a contract in relation to the efficacy of the kit and what remedies were available if it didn’t work. I was even given a book on the train-wheel interface in question so that I could get up to speed with the technology.’

She stayed until 2013, a period that included her secondment to the Infrastructure UK team at HM Treasury, where she helped develop the new infrastructure procurement policy and PF2, a new approach to public private partnerships (a government service or private business venture which is funded and operated through a partnership of government and one or more private sector companies).

Partner-level secondments are unusual, but it was in the firm’s interest, she says. ‘You have to structure secondments so that both parties see a benefit,’ McConnell says. ‘I saw how things are done differently outside the legal sector, which I then brought back to my firm as an advantage over competitors because it’s a new area of speciality.

‘It was good for personal career development, too. It gave me an insight into using legal skills in a non-legal capacity and interpreting law that had arisen from developing policy in a government department. The Treasury, in turn, benefited from working with an individual from a different environment who could explain how things were done in the private sector. Everyone was a winner.’

She adds that she has always had career interests outside the legal profession, and instances the years she has spent in a non-executive director’s role at Regents University, London, a small not-for-profit institution founded in 1984. ‘My role is to help ensure proper governance and that the senior management team is acting in an appropriate manner,’ she says. ‘Coming from a legal background, there are skills you acquire and develop that you can apply in a non-legal environment.

‘You need to challenge constructively, to probe and ask why they are doing something now and not later, how they plan to achieve the objectives of the organisation and what it will cost. It is hugely enjoyable to get under the skin of an organisation rather than simply advise and move on. Solicitors are under-represented on boards and yet we all have commercial skills and should be more upfront about it.’

In 2013 she left private practice to found Fishpool Consulting. ‘It was a big challenge,’ she recalls. ‘There was none of the support structure of a big firm, as I was used to. I was starting an SME from scratch. It was exciting and, for me, underlined the raft of skills solicitors acquire that can be used in a whole range of contexts. Working in both legal and non-legal environments is perfectly possible, as more and more solicitors are demonstrating. It proves that solicitors are commercial, not just advisers. They are perfectly capable of integrating totally into clients’ businesses.

‘One client – and I took this as a compliment – actually said that you wouldn’t know from the commercial and strategic advice that I’d given him that I came from a legal background. If I achieve nothing else, I want to help people recognise the practical commercial skills of solicitors.’

Reflecting on a varied career, she says: ‘We spend so much of our lives working that it’s important we enjoy what we do. It’s what enables us to get the right work-life balance.’