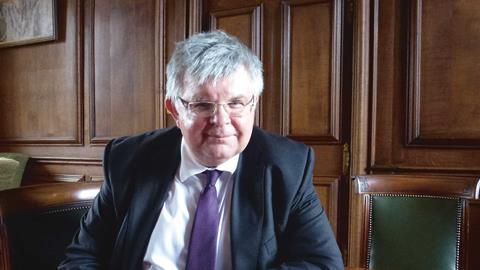 Fundamental assumptions that underpin our approach to the law are wrong, says David Howarth, academic and former MP for Cambridge.

Practice can feel very distant from the academic study of law, as any trainee who has gone from writing final-year essays on Roman law in a grand university building, to handling the scanning and pagination of trial documents in some windowless reprographics room, will confirm. For aspiring lawyers who enjoyed academic law, the early years of practice can be a shock.

David Howarth, law fellow at Clare College, Cambridge, and the city’s Liberal Democrat MP from 2005-2010, is concerned about the gap between what the law needs to deliver and the way it is approached –from higher education to the boardroom.

In Law as Engineering, Howarth challenges lawyers to recognise that they are engaged in something much more like engineering. It is a ‘strategic metaphor’ he says, because it does not just elucidate one point – it carries on being relevant.

‘Law is a design profession,’ he argues. The lawyer is designing something that is ‘supplied’ to the client – and the client is the figure often left divorced from ideas around the philosophy of law. Litigators, who are ‘military engineers’ designing to meet an emergency, need to recognise that such a rethink also applies to them.

So far, so good. And talking over coffee in the senior common room at Clare, a pale autumn sun streaming in through 18th-century windows on to panelling and portraits, it seems interesting – exciting even. But what about the practical implications? He comes to these, but not quite yet.

In modern times, the rot (I paraphrase) set in with Oxford’s HLA Hart, professor of jurisprudence, principal of Brasenose College and author in 1961 of the influential The Concept of Law. ‘Hart said the state of jurisprudence at Oxford was poor, because people were thinking about law as word processing. Increasingly I think that’s a mistake,’ Howarth says.

The philosophy of law ‘is not particularly helpful’ when it comes to the fundamental legal objective of ‘avoiding making mistakes’. Engineering, with its focus on not just design, but also ‘safety’, is quite simply a better guide, he thinks. Engineers are safer than lawyers because they must design with an eye on neighbouring structures and the environment.

Instead, in a common law jurisdiction, it is left to judges to manage all the resulting tensions. They need to have ‘an eye on the case, an eye on the system as a whole, while deciding something very specific for the short-term’. The precedents created direct our ‘compliance’, even though all are examples of laws that have (by definition, because they have ended in litigation) in some way failed. This is a situation Howarth considers unsatisfactory.

This is not just an engaging spat between two academics; Howarth alive, Hart dead. The former is, in part, reacting to recent events that highlighted what ‘unsafe’ lawyering looks like: the lawyer-designed financial instruments that unravelled so dramatically as the financial crisis unfolded from 2008.

To avoid a rerun of such events, Howarth says, lawyers ‘must change how they think about themselves’. Their advice, in the case of financial services, may be entirely compliant with the letter of the law, but the problem comes when lawyers have taken insufficient trouble to understand the context in which the advice is supplied – what relationship, to use the engineering metaphor, it has to its immediate surroundings and the environment.

It is not enough, he continues, to be compliant in regulatory terms: ‘Regulators see very little of what they regulate.’ Inevitably, a system that relies solely on the regulator for its stability will fail, because the activities of the regulator are ‘based exclusively on external observation and punishment’. Far better, Howarth says, for lawyers to develop questions to help them ‘understand what you made’.

While Howarth’s specialism has earned him the nickname ‘the god of tort’ among some lawyers, he is no slouch in economics either. He drafted, alongside future Monetary Policy Committee member Martin Weale and others, the Lib Dems’ economics policies of the early 1990s.

He does not refer to it, but might also have drawn on the example of the MPs’ expenses scandal, which coincided with his time in parliament. Many expenses claims complied with the rules but in making them, members failed to appreciate the relationship between the claims and their political resonance. Reassuringly, Howarth seemed to see the point, commuting daily between Cambridge and Westminster at a point when outer-London MPs were busy ‘flipping’ properties. His choices, one can see, were ‘safe’, at a time when others were focused only on being ‘compliant’.

In line with such thinking, Howarth is scathing about the attributes claimed by much of the legal profession for ‘the rule of law’. He believes the bar is set far too low. ‘If you’ve been anywhere near a statute,’ he says, ‘you realise the law can be anything.’ It is therefore wrong to claim too much for legal compliance. ‘A professional standard is different to the law,’ he points out, and simple compliance, often termed upholding the rule of law, is not the same as taking full account of the ‘ethical implications’ of an action.

KNOW FOR reader in Law, Department of Land Economy, University of Cambridge; MP for Cambridge, 2005-2010

As an MP, Howarth served five years in the institution where our laws are, at least notionally, ‘designed’. It can, he reflects, be difficult to see our legislators as designing our laws when the ‘design’ process (notably the committee stage of a bill when MPs are appointed to scrutinise it) involves government systematically rejecting amendments on political grounds.

However, appointed to the committee scrutinising the 2006 company law reform bill, Howarth had a better experience. ‘It was a more open process,’ he recalls. ‘Unusually, [government] was happy to have civil servants talk to the opposition… these were good experiences.’

The resulting Companies Act (the longest in British history, with 1,300 sections over 700 pages) changed directors’ duties, and the laws on takeovers and mergers. Significantly, it was designed as a ‘consolidating’ act, avoiding the need for cross-referencing between statutes to be understood. It meets some of the criteria favoured by the ‘Good Law Initiative’ (of which more below).

Observed up close, however, few elements of the legislature met such a standard. Legislation, Howarth notes, very often has little to do with law-making. Often, a bill is introduced ‘not to change the law, but to show the government cares’. For example, ‘we seem to change the law on self-defence every year.’

A more enlightened approach to government and the creation of legislation would allow it to take account of other work that has caught Howarth’s attention. He is among those who believe that ‘big data’ and data analysis show some potential for law. ‘Can you track the life cycle of a statute?’ he asks. ‘Do some types last longer? Is there a pattern in amendments? Or in the ones that don’t work?’ If litigation shows a ‘fault’ in legislation, can its results be used to design out the fault?

Such things are the focus of the ‘Big Data for Law’ project he co-leads with John Sheridan, head of legislation at the National Archives, Professor Helen Xanthaki at London’s Institute of Advanced Legal Studies and others. The project aims to ‘transform how we understand and use current legislation’, by delivering a ‘big data toolkit’. This will include open data, new tools and new research methodologies.

It sits alongside Sheridan’s ‘Good Law Initiative’, which aims to improve the accessibility of laws in tandem with the ability of laws to have an intended effect. Research includes exploring how different drafting styles and approaches to presentation can aid or improve comprehension.

All of which could change further students’ experience of ‘legal education’. About time, Howarth argues: ‘When law firms start hiring again in larger numbers, you’ll see the same pattern as before – a high percentage of people without law degrees. What does that tell law schools? It’s not good enough to say that law is a purely academic subject like history and philosophy.’ If law is ‘a form of design’ that therefore deals in ‘responsibility’, then its teaching should reflect that.

Some reviewers of Law as Engineering have gained the impression that a new breed of lawyer with wide responsibilities for maintaining a standard that is above mere compliance requires constitutional reform. Not so, Howarth says. But some capacity-building needs to take place. He cites the masters degree at New York’s Columbia Law School which, when changed to include sections on deals and transactions, at first struggled to find lawyer-academics to teach it.

All the more reason to make a start, Howarth concludes. After all, the sooner we start, the ‘safer’ we will be.