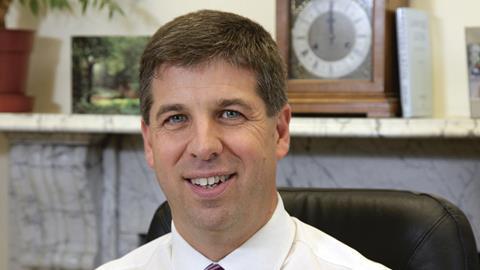 It is probably the one sentence in Magna Carta that everyone knows: ‘To no one will we sell, to no one deny or delay right or justice.’

And yet, demands the new president of the Law Society, ‘if King John could lay the foundations for universal justice 800 years ago, then I would hope a 21st-century lord chancellor of a mature democracy would afford citizens the same courtesy’.

Access to justice, Jonathan Smithers tells the Gazette, is to be one of the keynotes of his 2015-16 presidency, as it was during the tenure of his predecessor Andrew Caplen. He will also be turning his attention to enhancing the rule of law, the Human Rights Act (HRA), encouraging businesses’ respect for human rights, developing new ways of practising, strengthening the Society’s special consultative status with the UN and a myriad other challenges facing the profession.

The Gazette ventures that this is all a tad ambitious, but Smithers is upbeat: ‘When you become president, you become less yourself than the personification of the Law Society. You are conscious of being the leading representative of the leading jurisdiction in the world. When the Law Society speaks, people listen.’

He adds: ‘I want to enhance appreciation of what our profession does for society. Law is not only about the police and the courts. It is about embedding justice into our society.’

He goes on to explain that justice is about the rules and laws that make us safe, allow us to create health services and parliaments, facilitate education and commerce, and underpin all the other mainstays of civilised society.

But he cautions: ‘We are not here to sort out everyone’s problems. The Law Society’s role is to support, promote and represent the solicitors’ profession. However we can help raise our profile with the public and media. Sometimes our voice is not as audible as it should be. We want everyone, whether the lord chancellor or the person in the street, to recognise the key role that the law plays in all our lives.’

We turn to discussing Smithers’ objectives for the coming year. ‘Access to justice is high in the public consciousness because this year is the 800th anniversary of the sealing of Magna Carta,’ he begins. ‘It is believed that in the last two years, some 600,000 people have been excluded from civil legal aid following government squeezes on the justice budget.

‘But it is not only legal aid. There has also been a steep rise in court fees, with many individuals unable to afford to bring their legitimate claims before a judge. The possibility of more funding is frankly remote – the lord chancellor appears determined to carry on with the cuts that his predecessor began. Nonetheless, the Society will continue to make the case for improved access to justice as loudly as we can and to anyone who will listen.’

In tandem with lobbying government, Smithers wants to see the profession and the Society lead on developing new ways of providing efficient and affordable advice. ‘Innovation must come from within the profession,’ he insists. ‘We must stop hiding our light under a bushel and lead, not follow. Simply spending money on IT projects should not be the only way forward. We should listen to our members and promote the expertise that we already have in this country. After all, there are 10,400 law firms out there competing the life out of one another. That’s a huge pool of talent.’

The interview moves seamlessly on to the rule of law and its economic value, both to this country and globally. ‘A broad commitment to justice ensures a stable society and government,’ Smithers says. ‘That in turn increases international confidence in the country, attracting investment and encouraging companies to move their centres of operation here.’

During his presidency he plans to strengthen the profession’s ties with HM Treasury, UK Trade & Investment, the Department for Business, Innovation & Skills, HMRC, the chambers of commerce, the accountancy profession and EU institutions. He will also seek to persuade the government to include a legal representative both on future international trade missions and when foreign trade missions come to the UK.

Turning to human rights, Smithers confirms that under his leadership the Society will lobby for retention of the rights contained in the HRA and continued adherence to the European Convention on Human Rights (the convention) and to the rulings of the European Court of Human Rights.

The HRA, he says, and by extension the convention, enshrines in law many of the fundamental building blocks of our democracy, such as the right to a fair trial, freedom of expression and no punishment without law. ‘The Northern Ireland and Scotland devolution agreements contain commitments to the HRA, and so our withdrawal would require radical reforms to remain lawful.

‘But we should fiercely defend the rights within the HRA and our convention commitments not only for our citizens, but also for our international standing. How [could] we protest about other governments’ breaches of human rights when we are no longer signatories to the convention?’

Smithers has so far spent much of the interview focused on legal aid and human rights. Both are worthy topics, but a small minority of the profession works in either area. Are there not solicitors out there in different practice areas who are hurting and need support? ‘We are not here to run anyone’s business for them,’ Smithers stresses.

‘But actually, as I travelled around the country as vice-president, I saw many, many firms that are quietly doing very well at serving their local community. There will always be challenges in our dynamic economy. Firms will start up as others fail or merge. Change is good for the profession. It keeps us relevant and reactive to what else is happening in society.’

Chancery Lane helps solicitors succeed in many ways: ‘Our committees exist to help firms with particular practice areas. They lobby government and complete consultations on all proposed new and revised legislation. We have the UK’s foremost legal experts in pretty well every area of practice sitting on them. It is their role to help ensure that, for instance, a revised environmental law is a good law that can be applied by an environmental lawyer for the benefit of a client and the community.

‘Solicitors can join divisions that support their work by pooling resources. There is a small firms division, for example, a law firm management section and a division for firms with ambitions to practise globally.

‘We also work to raise standards. Newly qualified solicitors are reminded at their admissions ceremony that the actions of any one solicitor affect us all. There is no room in the profession for practitioners who bring the law into disrepute. That’s why the Society brought in the conveyancing quality standard and other accreditation schemes, including Lexcel. There is the perennial problem of market forces pushing solicitors towards areas that are not their speciality. That’s why we need to keep on raising standards.’

Smithers qualified in 1986. How has the legal market changed? ‘Increased social mobility,’ he replies. ‘When I was trying for articles, I was told that there was no point applying to certain firms if you hadn’t been to Oxford or Cambridge. More recently, at a roundtable discussion, someone told us that you can’t get on in a City firm unless you play golf or polo. I didn’t go to Oxbridge and I’ve never played either of those games, and yet I’m president of the Law Society of England and Wales. That’s progress.

‘The Society is actively promoting equality and diversity. We have the Diversity Access Scheme, which helps people from less affluent backgrounds complete their legal education by providing funding for their Legal Practice Course fees. We support the education charity, Sutton Trust, and the Citizenship Foundation, which encourages young people to participate in society as equal members.’

Anything else? ‘Alternative business structures,’ he replies. ‘Some [lived] in fear of big-money owners interested purely in profits at the expense of ethics and customer service. That hasn’t happened. A lot of ABSs look just like traditional law firms. I heard of one recently that was owned by a solicitor, a legal executive and a licensed conveyancer. Other solicitor partners had left and so the present owners applied to become an ABS.

They provide a professional service and are still regulated in the same way as before. Most of the clients probably don’t know or care that anything has changed, so ABSs can be a good thing if they provide some flexibility.’

As our conversation draws to a close, Smithers also draws attention to other items on his to-do list. These include the Society’s new, special consultative status with the UN: ‘It means we are automatically on the list of consultees when legal issues arise and we also have better access when lobbying. This places England and Wales law firmly in the forefront of international law.

‘We also need renewed focus on the in-house sector, where 25% of our members work. There are in-house lawyers at large and small companies, as well as in government, charities and regulators, and we need to reach out to them all.

‘And, finally, there’s regulation. I think our relationship with the SRA is the best it has ever been and we will continue to work with other key stakeholders, such as the Legal Services Board and its consumer panel. Regulation – or, at any rate, too much of it – is an important issue with smaller firms in particular. We will be doing all we can to support them.’