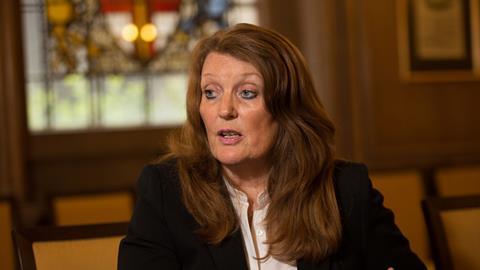 Most of her clients are ‘sad, not bad’, solicitor-advocate Joy Merriam tells the Gazette.

‘People think it can never happen to them,’ she says, ‘which is why access to justice and a fair trial are never headline election issues. But when it does happen, and you find yourself in trouble with the law, the delays and baffling legal processes can reduce you to a numbed state of shock.’

The situation is not helped, she adds, by the media’s tendency to talk about ‘victims’ the moment someone is charged. ‘They are complainants until the alleged perpetrator is found guilty. It’s only then that they become victims. Getting this point across is the criminal lawyer’s constant battle.’

Merriam was admitted to the roll in 1981 and in the ensuing 34 years has acted as an advocate in both the criminal and family courts, in some instances successively representing three generations of the same families. She recalls a client for whom she acted immediately after she had qualified. He observed that she ‘looked a bit of a lemon in there [the courtroom], as if you didn’t know when to stand up or sit down’. He became a regular client, she says, so she must have done something right.

Much has changed, she reflects: ‘Advocacy and criminal defence were not considered a proper job for women when I first started. Conveyancing and family law were the only proper career paths open to us. We were not supposed to go down to police stations and talk to villains – that was man’s work. Things are very different now. Many women work as criminal defence solicitors.’

Were there huge career barriers to surmount back then? ‘Actually, I suffered more sexism from the police in the 1980s than from my clients,’ she responds. ‘Criminals pretty much judge you on your performance in court. If they see you speaking well on their behalf, then that’s what really matters to them.’

Merriam’s skills were rewarded in 2013 when she won the accolade of solicitor-advocate of the year at the Law Society’s Excellence Awards. The citation praised her ‘significant contribution to the advancement of advocacy by solicitors’. She has ‘forensic analytical skills’ but importantly is able to ‘speak human and bring sensitivity to the court process’.

Her profile has continued to rise. She has higher rights in both civil and criminal law. She is a committee member and past chair of the London Criminal Courts Solicitors’ Association and a committee member of the Criminal Law Solicitors’ Association. She is a Law Society council member for criminal defence, chairs the Society’s Access to Justice Committee and is a member of its Criminal Law Committee.

She also works on a committee chaired by HHJ Peter Rook QC, who currently sits at the Central Criminal Court and is co-author of the definitive Rook and Ward on Sexual Offences. Merriam explains that the committee’s brief is to ‘develop a training scheme for advocates to help them work with vulnerable witnesses’.

‘Vulnerable’ in this context can mean people with learning difficulties or a mental illness. But more commonly, she says, it refers to someone who alleges that they have suffered one or more sexual assaults. The committee is looking at alternatives to the traditional adversarial cross-examination of the vulnerable, which has been described by some rape victims as almost as bad as the assault itself.

It is a distinguished track record and yet, Merriam says: ‘There was no practical training when I began my solicitor-advocate career. You just tried to shadow somebody, sitting behind counsel, watching and learning. The bar has a well-established training regime and now we have the Law Society’s Advocacy Section.’

Merriam is an active member of the section, which describes itself as ‘the community for solicitor-advocates’. It offers practical guidance on a wide range of matters, including managing litigants in person, maximising the effectiveness of closing addresses to judge and jury, and avoiding the procedural and etiquette pitfalls when conducting mitigation. Members enjoy various benefits, including webinars, e-newsletters, case commentaries, and discounts on training.

How does she explain clients deserting barristers for solicitor-advocates? Is it simply a matter of cost? She shakes her head. ‘It’s the relationship with the client that tips the balance,’ she says. ‘What makes solicitor-advocates so good is what distinguishes all solicitors from the barristers we instruct. We know our clients and they know we know them and their history.

‘It’s the same with family courts. If you are a parent at risk of losing your family, you want to be represented by someone who knows you and all the issues involved.

‘Empathy is so very important. Empathy can’t be taught, but solicitors who choose this relatively low-paid area of law tend to have it in spades.’

Law was not a family tradition: ‘I come from a working-class background in Sheffield and both my parents left school aged 14. I won a scholarship to Sheffield High School and became the first member of my family to go to university.’

Merriam’s father died suddenly just after her 18th birthday – but this was at a time that means-tested grants were available for students in tertiary education. So she was able to emerge from college without significant debts, while knowing lots of people from a similarly modest background in the same situation. ‘I was fortunate to have been of a generation that, through public funding, was able to be part of a diverse entry to the profession,’ she reflects. ‘The danger now is that the profession will become elitist again because of the huge loans that students need to take out. Only the rich will be able to afford the long journey to qualification. Diversity is essential for the profession, which should reflect society.’

Merriam has handled many memorable cases over the years – which in particular spring to mind? ‘Just last year I represented a postgraduate law student charged with rape. It was quite typical. He and the complainant were on a date. She said no, but – she maintained – he carried on regardless. It came down to her word against his and, as in so many alleged sex offences, they were the only two people present who knew what really happened.

‘If my client had been convicted, it would have been the end of his law career. He would have gone to prison and had to sign the sex offenders’ register. It’s a huge responsibility for the solicitor-advocate. The man was of good character and if the defence went wrong, the result would have been life-changing. We are quite restricted in what we can and cannot ask the complainant [see Merriam’s work with the Rook committee above], and so questioning her was a minefield. Nonetheless, sadly for her, my role was to discredit her evidence, which I duly did. My client was acquitted.’

Merriam next talks about what she calls the ‘miracle baby case’, in which she acted for a child ‘born’ to a God-fearing couple who were victims of a bogus fertility treatment scam at a clinic in their native Nigeria.

The couple were keen to have a child but for some years had been unable to conceive. In desperation, they went to a clinic in Nigeria and the wife was treated with injections and tablets costing around £6,000 before returning to England. Some months later, when she started to gain weight, she went back to the clinic in Nigeria and was told she was pregnant. In January 2011, she gave birth – or so she believed, by medical sleight of hand – to a child.

Her GP in England, however, refused to accept that the child was hers because she had repeatedly tested not pregnant in the preceding months. He reported his suspicions to the local authority, which commissioned a DNA test proving that neither the husband nor wife was the baby’s biological parent. The local authority then began proceedings to remove the child from the couple’s care.

‘The couple wanted to adopt the child themselves,’ Merriam says, ‘but because they were not the natural parents, the local authority argued that the baby had unlawfully been removed from its real mother.’ Merriam, however, was able to convince Mr Justice Coleridge, sitting in the family division of the High Court, that the couple were innocent victims.

The judge urged the local authority to reconsider its stance, citing the grounds that the couple were good candidates as parents and had a moral claim to be first in line to look after the child: ‘An independent social worker was appointed and the baby was placed with the couple under a special guardianship order. A good result.’

It is no surprise to hear, too, that Merriam is a passionate defender of legal aid: ‘This government doesn’t realise how much we do to keep the criminal and civil justice system going in this country. We are the champions of the weak and vulnerable and will continue to be so for as long as we can survive in the marketplace.

‘There are many, many people at the Law Society and in pro bono organisations who are continuing to support the legal aid side of the profession. The profession owes them an enormous debt.’