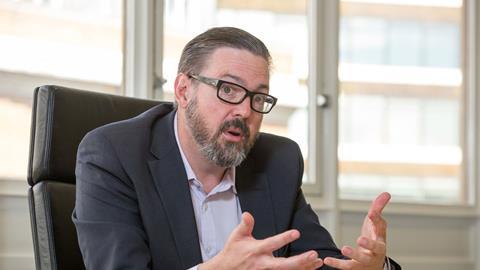 How do you turn around a law firm that just lost £570m? John Hyde speaks to Slater and Gordon’s UK chief executive.

The walk from the Gazette newsroom at 114 Chancery Lane to Slater and Gordon’s London office at numbers 50-53 takes less than two minutes – yet it has taken four months to negotiate an interview with the Australia-listed firm’s UK chief executive Ken Fowlie.

Fowlie’s caution is understandable. The firm has endured 18 months of negative headlines, prompted by a scale of financial loss never before seen in a viable law firm.

Since he moved permanently to the UK in May 2015 to lead the London office, the firm has been plunged into a crisis caused largely by the purchase of the professional services division of listed firm Quindell. The deal went spectacularly wrong. The UK business alone lost £37m in 2015/16 and the company is in the midst of a reorganisation plan that is likely to trim the workforce and geographic range of the business (Andrew Grech remains the global CEO).

Interviewed in his boardroom, Fowlie is flanked by two press officers who remain silent throughout – he is not a lawyer who needs minding for fear of going off-message. In fact, the Slater and Gordon UK chief executive repeats the word ‘opportunity’ 24 times in a one-hour interview. Another favourite word, ‘terrific’, gets 20 uses.

Life can hardly be ‘business as usual’ behind the scenes, but Fowlie insists you would not know too much was wrong if you spent time in the offices, away from balance sheets and stock market indices.

‘A lot of people’s appreciation of Slater and Gordon is what they conclude from reading our financial statements or reading reports about our financial situation,’ he begins, quickly adding: ‘This is an incredibly dynamic business where there are literally thousands of people every day looking after the needs of tens of thousands of clients.’

He insists: ‘While we are a different organisation to others, and people would feel and see differences to organisations that are smaller, this is an organisation first and foremost focused on the needs of its clients.

That is not to say press coverage never hurts. One article originating in Australia, suggesting the firm may seek to rush through claims settlements to deliver quick turnover, still rankles.

‘That was very disappointing and it was disrespectful to the professional integrity of the people who worked within the organisation,’ says Fowlie. ‘We were very disappointed about that and it’s not true. We are an organisation that prides itself on the work it delivers for clients.’

Fowlie studied economics before becoming an industrial disease lawyer at Slater and Gordon. He says he has always been as passionate about how to run a business as how to run a case.

Originally based in Melbourne but craving a move to his native Sydney in the 1990s (‘I was a northerner trapped in a southern city’), he took on a small team of lawyers in his home city and grew the business from there, before deciding to take time out from work and return to education.

In 2012 Slater and Gordon made its high-profile entry into the UK legal market with the purchase of union and personal injury firm Russell Jones & Walker. Fowlie remained on the firm’s board and was in London completing his Sloan masters in leadership and strategy at London Business School. But he was not involved in the transaction, having taken a leave of absence.

He returned to Australia in 2013 but within two years he was back, enthused by the chance to lead what he stresses is still the biggest consumer law firm in the UK. ‘There is no doubt that the pull of London and the UK is enormous. It is an incredibly exciting professional opportunity,’ he says.

‘This is a marketplace that is obviously substantially larger than the Australian one; it is in a state of flux and that presents enormous professional opportunity.’

By 2015, all had appeared smooth sailing for a firm that made no secret of its ambitions to disrupt and dominate the UK market.

A series of acquisitions followed the RJW deal, spreading Slater and Gordon across the country and making it one of the most talked-about firms in the profession. Brand awareness was suddenly all-important, and the firm – even though rooted in Australia – went so far as to sponsor the bat of the England cricket captain Alastair Cook.

This ambition, however, was perceived as arrogance by some within the sector. Here, it seemed, were the cocky Australians coming to the UK and riding roughshod over centuries of tradition.

Thus, when the firm hit difficulties, schadenfreude was the dominant theme of many Gazette reader comments below any Slater and Gordon article.

Yet the suggestion that the firm is unpopular in the sector is one Fowlie denies: ‘I actually think the industry has been very welcoming.’

Did the firm do enough to ingratiate itself with the UK profession? And was it wrong to try to impose a corporate culture on acquired firms whose own culture was more collegiate?

Instead, he insists: ‘The service of clients and answering their needs is all part of, and intimately connected with, financial success. I feel a strong sense of alignment in a personal values sense with the people we have within the business.’

Fowlie and the firm, then, have no regrets? He comes no closer than this: ‘There isn’t any activity you’ve probably done in the past that others couldn’t offer constructive suggestions for how to do it better. You can spend your whole life thinking back and reflecting “gee, I wish I hadn’t done this and that” but really as a business we have got to keep looking forward.’

The £637m Quindell acquisition is the one deal most argue Slater and Gordon should regret. The takeover brought on board thousands of hearing loss claims that may be worthless and sparked regulatory investigations, a share price collapse, and ultimately a net loss of £492.5m for the second half of 2015.

It is made clear in advance of this interview that Fowlie cannot go into detail about the rights and wrongs of the deal, due to ongoing legal action against the Quindell successor company Watchstone, but he is unrepentant about the business case behind it. Watchstone, meanwhile, has said it will defend the claim ‘robustly’.

‘To meet our aspirations of being a consolidator within the marketplace, particularly in the PI space, it was going to be important to have those capabilities to service some work in a commoditised, low-cost environment [and] it would be important to try and open avenues to different ways of sourcing claims,’ he argues.

The ‘opportunity’ presented by Quindell’s professional services division, Fowlie says, ‘allowed us, in one transaction, to secure many of those attributes’.

Surprisingly, he even presents it as the more cautious of the choices that faced the ambitious Slater and Gordon: ‘The judgement that we made at the time for the business … was that the risk associated with that acquisition was a lesser risk, as we assessed it, than the associated risks of achieving the same ends through either a multiplicity of transactions or through organic development.’

While interest in the firm was so high, the media was of course able to feast on any hint of problems through Slater and Gordon’s exposed position as a listed entity on the Australian stock exchange.

However, Fowlie stresses there is no way Slater and Gordon could have grown as it has in recent years without funds generated by going public, and he dismisses the idea that close scrutiny makes his job harder. ‘When you are trying to move the industry in a particular way, then there are always going to be elements that are perhaps a little more sceptical and don’t mind if you trip over occasionally.’

He adds: ‘I don’t think being a listed company in and of itself creates a particular set of challenges for the business. We are a market-leading organisation within the UK; we are doing lots of things; we attract a lot of attention.’

Fowlie avoids disclosing how many staff will have to go to accommodate such changes, and insists the company has had a ‘very open dialogue’ with its employees about their futures.

The use of technology will inevitably increase (particularly in low-value claims) as costs pressures kick in, although Fowlie insists the quality of work will not suffer.

His upbeat tone only occasionally slips and even then not for long. Fowlie will admit to these last 18 months being a ‘pretty strong learning curve’ but there is no sense that he is downcast.

‘I have been most struck by the vibrancy, dynamism and the resilience of the team that we’ve got within the organisation,’ he concludes. ‘It has had its moments of challenge, no doubt, but it has actually been an incredibly rewarding professional period in terms of learning about myself and about our business.’