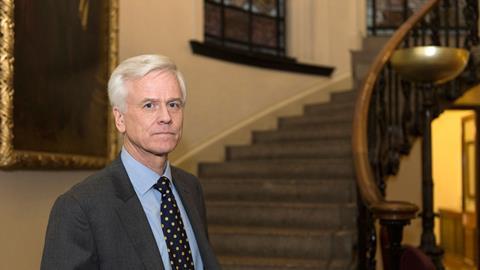 Stephen Mayson has been a legal business guru for three decades, and modernity remains his watchword. Jonathan Rayner spoke to him

Professor Stephen Mayson began his career as a consultant adviser to law firms aged 30. He admits that a tyro lawyer presuming to advise senior practitioners sounds ‘very arrogant’. But it was 1985, he says, when the marketing of law as a business was ‘nascent’ in the UK and the opportunity was there for seizing.

In the ensuing decades, he continues, he has met ‘many burnt-out, tired and dispirited lawyers’ and yet he still passionately believes in the ‘rule of law and the profession’.

Such ambivalence informs much of Mayson’s thinking about the state of English law in the 21st century. The Legal Education and Training Review, published in June 2013, for example, although bold in its scope, was a ‘missed opportunity’. He says: ‘We should not have paid so much money for a mere review of the literature.’ He has similarly mixed views on the traditional partnership model for law firms. ‘I’m a great fan of the partnership model in principle, but think it rewards too many people for doing the right thing in the wrong way.’

He is also a committed advocate of change. ‘Compare the law with the advances made in medicine,’ he argues. ‘We would be horrified if hospitals continued to use old technology when something modern was available. And yet many law firms are resisting the need to marry technology with their core business of case management.’

The Gazette is interviewing Mayson, a consultant and honorary professor at the Faculty of Laws, University College London, in part because he is to give the keynote speech at a Law Society conference on 17 March: Legal aid and beyond: practical justice post-LASPO.

‘The theme is access to justice as a business,’ Mayson says. ‘The fabric of society is underpinned by the rule of law and administration of justice. Access to justice is fundamental to society. I‘ll be exploring the balancing act that is necessary between the many and complicated rights that are expensive to enforce, and the supplier base (that is to say the lawyers), which is probably more expensive and inefficient than it should be.’

Inefficient, he says, in that lawyers ‘are often working to re-craft the same outcome, rather than adopting a process that uses technology to deliver the same thing time and again. They should step back and scope the work and decide the best way to go forward by marrying technology with case management’.

And why are lawyers deemed ‘expensive’? ‘They have expectations of a decent salary,’ Mayson answers, ‘which is reasonable given that they have trained for years and years. But if clients can’t afford the fees, then how are we to achieve access to justice for everyone?’

Turning to the near demise of publicly funded legal advice, Mayson likens cuts to legal aid to squeezing a balloon: ‘The balloon may shrink in one place, but it will expand elsewhere. You are simply transferring inefficiencies from the area you are squeezing to where the balloon is now bulging.’ He instances litigants in person, whose lack of legal training makes judges need to act more inquisitorially. ‘Costs are driven down because no defence lawyer is instructed, but at the same time longer court and judicial time is incurred – which drives up costs.’

Is it a hopeless case, then, with universal access to justice fated to remain an unachievable ideal and the profession doomed to dwindle as firms fold under financial pressure? Mayson shakes his head. ‘I still passionately believe in the rule of law and our profession. We still want good people to qualify as lawyers. It’s very difficult to do so now and earn a living; and it will be even more difficult in the future.

‘There is a massive polarisation of rewards between big City firms and the high street. Whichever sector you end up in, you must be absolutely committed to the life it entails. Unless you passionately believe in what you are doing, then it is probably not worth doing it at all.’

Mayson’s legal career began as a tax lawyer at Clifford Chance legacy firm Clifford Turner, after he was called to Lincoln’s Inn and a five-year stint teaching at the Inns of Court School of Law.

ROLES: Clifford Turner, tax lawyer and director of training and knowhow, 1982-85; consultant and, latterly, non-executive director of various organisations, 1985- ; honorary professor of law in the Faculty of Laws, University College London, working particularly with the Centre for Ethics and Law

KNOWN FOR: Specialist consultant, prolific writer and thinker on legal business and governance of law firms

‘I became the firm’s first director of training and knowhow,’ he recalls, ‘which got me interested in law as a business.’ Clifford Turner was growing and so Mayson ‘was able to get alongside management and see law firm management in action’.

It ‘fascinated’ him so much that in 1985 he set up on his own as a consultant, with his first client being Clifford Turner. ‘It wouldn’t be so easy to start up like that nowadays, but in those days firms were starting to think about management and there was a general shift toward the law becoming more business-like,’ Mayson explains.

‘It was also around the time that licensed conveyancers entered the market, which was perceived as a new threat to traditional law firms. There were already consultancies in the US, but nobody else in Europe was doing what I wanted to do. I managed to persuade enough people – that was possibly the barrister in me – to get me up and running. I soon had not only Clifford Turner, but also other big name City firms on my books.’

Those early client firms required advice on a diverse range of issues, such as strategy, management structure, technology, partnership issues, goodwill, property, profit-sharing and mergers. The Gazette asks whether these continue to be the main areas of concern for law firms or whether fresh challenges now present themselves. Mayson notes that supermarkets and membership organisations offering legal services in the wake of the Legal Services Act (LSA) 2007 have raised fears about so-called ‘Tesco Law’. Many lawyers remain convinced that such businesses offering legal advice will be interested in profit above all else and will not put the same emphasis upon the profession’s code of ethics.

The high street, though, has not been buried under an avalanche of alternative business structures selling groceries or holidays on the one hand and legal services on the other. Saga Legal Services has stopped taking new business, at least for the moment. This follows the AA’s announcement that it has abandoned its attempt to break into the legal market, and also the widely reported problems of Co-operative Legal Services.

‘Don’t write them off,’ cautions Mayson. ‘It’s just that nobody has got it quite right yet. They are still a threat in prospect, if not in reality. If they are in the consumer market, they have access to clients and the advantage of an underlying base of consumer loyalty and brand recognition. Put the two together and in time they are likely to get it right and take work that otherwise would have gone to a traditional firm. They tend to target volume work, and use their retail and promotional skills to attract clients and reduce costs – practices which are alien to traditional law firms.’

How can firms resist such a potent threat to their existence? ‘They must persuade clients that what they are paying for is valuable. They should focus on customer service and the advantages of one-to-one advice from a qualified professional, for instance. And they should stop being their own competitors.’

Mayson is asked to explain that last gnomic utterance. ‘A 2012 survey found that law firms lose almost half of potential new clients by mishandling telephone calls,’ he explains, ‘with some 33% of calls disconnected before they reached a legal adviser and 44% put through to the wrong person. Firms are effectively turning work away into the arms of others.’

The interview moves on to reserved activities and regulation, two issues that have long featured in Mayson’s writing and speeches. ‘The whole edifice of reserved activities is anachronistic,’ he begins, ‘and is founded on a fundamentally flawed basis. It is unsurprising that it cannot sustain the weight of a modern regulatory framework. Some activities have not been tested for risk, while others – such as will-writing – have been declared risk-free, which is so obviously wrong. A badly drafted will can cause serious problems for future generations.

It defies logic, but former justice secretary Chris Grayling was not convinced that will-writing needs regulation. He is part of a government that wants to see less not more regulation. He is missing the point. The debate is not about more or less regulation, but about what is the right regulation.’

Drawing the interview to a close, the Gazette asks Mayson about the future of legal services. ‘I would expect to see full independence between the regulator and representative bodies,’ he says, ‘rather than the present system where the Solicitors Regulation Authority has to bid for funds from the Law Society – which is the approved regulator under the LSA, but delegates its regulatory functions to the SRA.

‘And I would expect the country’s brightest young people of all backgrounds to continue to be attracted to the legal profession. You have to be a certain kind of person to be a good lawyer. You need a fundamental self-belief, which is part of the problem, of course. If you tell a group of 10 law students that only one of them is going to make it as a lawyer, they will all look sympathetically at the other nine.’