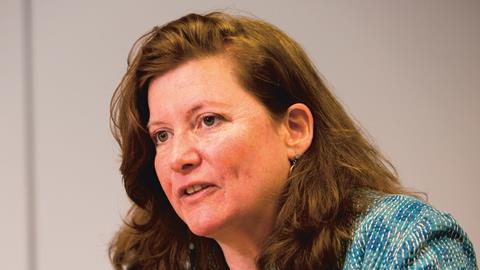 Solicitor Susan Hazledine, UK director of the International Senior Lawyers Project (ISLP), is a litigator who nowadays would advise clients not to go to court.

She prefers ‘Toyota truck, not Rolls-Royce’ solutions, she says, that owe their ‘robust’ nature to solid legal experience. Until recently she volunteered a pro bono day a week to write, on behalf of Oxfam, a book on ‘how to do everything legally’. She is also a self-confessed ‘argumentative sod’ and has no patience with ‘legal babble’.

Clearly, Hazledine’s professional life fits no routine pattern. And yet it started conventionally enough. She was a partner at magic circle firm Allen & Overy (A&O) for 14 years, most recently heading its global social investment programme. It was during her time at A&O that she nurtured a commitment to pro bono projects, here and abroad. In October 2013 she became UK director of ISLP, a charity that fosters sustainable development overseas with the help of UK lawyers acting pro bono.

These lawyers sometimes visit clients – NGOs, government ministries or civil society organisations in developing countries – for protracted periods. Or, more commonly, they provide assistance from their own desks with legal advice, research or analysis. They also mentor government officials and senior lawyers and, in the case of states emerging from wars or foreign occupation, advise on the drafting of new constitutions.

ISLP has some 170 projects across 44 countries, including Afghanistan, Malawi, Nepal, Cambodia, Colombia, Hungary and Russia. Its volunteers are currently onsite in 25 countries.

Hazledine is asked to chart her journey from magic circle to internationally focused legal charity. ‘Serendipity played a part,’ she says. ‘For example, A&O opened its China office just as I began my training 26 years ago.’ She went on to spend seven months in Hong Kong as a trainee and then a further three years there post-qualification. ‘It was like the Wild West, but in the far east. It was a small office with just nine staff, but all the benefits of an international firm with great clients. You redefined yourself on a daily basis. I even practised advocacy in court, which would never have been allowed in the UK when you are just a one-year post-qualification litigator.’

Hazledine remained at A&O for 24 years. ‘I hated litigation at law school [Guildford], but there is a big difference between study and practice,’ she says. ‘I’d originally wanted to work for Amnesty but found that, especially with the training you get at a top commercial firm, I liked the purity of constructing an argument. But then I’m an argumentative sod.’

How did pro bono enter the picture? ‘A&O participates in a number of award-winning pro bono initiatives,’ Hazledine says. The firm was one of the 2011 founders of Prime, which helps disadvantaged young British people get City work experience. A&O has also been helping the Bethnal Green Academy with various projects for the last 10 years. And in 2003 it founded Art Beat, which has forged links between the firm and the local community through art.

Overseas, she continues, A&O collaborates with Five Talents UK, a charity that runs a micro-finance scheme for the rural poor, mostly in Africa, to help them set up self-sustaining businesses. A&O also partners with AfriKids Ghana, a child rights charity. Hazledine says: ‘I was involved in a project in the gold mining area of Ghana where, historically, most children went down the mines without any formal education. The mines were informal settlements so nobody was obliged to provide schooling. We changed the law around schooling and set up a programme with the Red Cross to make sure that all the local children had access to teaching.’

During her time as a commercial litigator, Hazledine also worked pro bono to secure the acquittal of a death row prisoner in Trinidad, pursued another case to the Court of Appeal and advised at the Royal Courts of Justice Citizens Advice Bureau for more than a decade.

It was this track record that led her to become an ISLP trustee in 2010 and, in 2013, the UK director (ISLP also has offices in New York and Paris). On its website, ISLP says that it ‘fosters just and accountable development that is sustainable and supportive of human rights’. It achieves this ‘by mobilising our unique network of highly skilled and experienced pro bono lawyers to advise civil society and governments’. It defines senior lawyers as partner-level or with at least 15 years’ post-qualification experience. ISLP began in the US 15 years ago and 10 years ago in the UK.

Why exclusively senior lawyers? ‘Younger lawyers can also get involved,’ Hazledine says, ‘but only under the supervision of a partner. We believe that by giving complex legal advice based on years of experience at the start, our clients avoid problems later. That’s how we turn commercial lawyers into human rights lawyers. They ensure that developing countries negotiate the best possible contracts with, for example, mining conglomerates so that no unpleasant surprises surface in the years ahead.

‘Our lawyers can also use their knowhow to ensure that only the very best companies, the ones that treat people well, are allowed to bid for the contract. That way you avoid future litigation. Although I’m a litigator, I don’t encourage clients to go to court. It’s expensive and can go wrong. We aim to be the fence at the top of the cliff rather than the ambulance at its bottom.

KNOWN FOR: UK director of ISLP, a charity that fosters sustainable development overseas with the help of experienced British lawyers acting pro bono

The website lists around 170 clients with which ISLP has partnered. These range from big names such as Oxfam International, the United Nations Development Programme and the UN High Commissioner for Refugees, to less familiar bodies such as the Women’s Rehabilitation Centre (Nepal), the Mental Disability Advocacy Centre (Hungary) and Legal Support for Women and Children (Cambodia).

ISLP’s work in the south-east African republic of Malawi is in many ways typical. The country, one of the world’s poorest, became mired in a corruption scandal in 2013. ‘Cashgate’ is thought to have cost the Malawian people £35m in fraudulent payments for work not carried out. International aid charities, appalled at the scale of the corruption, withdrew from the country, depriving it of 40% of its GDP.

‘The root of the problem,’ Hazledine says, ‘is a police force that is often unpaid and therefore a prime target for corruption. Prosecutions are rare and frequently inconclusive. Our role is to try to support capacity-building for justice institutions, such as the Malawi Law Commission and the Malawi government itself. We also help train senior prosecutors so that police officers accused of corruption are investigated and, if appropriate, prosecuted.’

Has corruption been stamped out? Hazledine shakes her head. ‘Everything we do has a positive impact, but we can’t solve everything. Paul Mphwiyo, the Malawi finance ministry’s budget director, was shot and almost killed in September 2013 because he was about to expose the extent of the corruption. We can at least stand beside individuals like him, raise their profiles and, we hope, make their lives a bit safer.’

Referencing other projects, she continues: ‘We have transparency projects where, for example, if a mining operation is being set up, we want the government in question to disclose any proceedings or agreements it has entered into with the mining company,’ she says. ‘We are training NGOs on how to minimise the risk of defamation suits against journalists. States often use such suits to gag the media. We are training Russian lawyers to defend journalists and teaching them how to make applications to the European Court of Human Rights.

‘We are busy in Myanmar, where a highway project is going to displace thousands of people. We are helping a local NGO in Kenya’s Kerio Valley, which is concerned with the possible detrimental effects of oil exploration and development. And we are giving training to Tanzania’s hugely successful law school. There used to be a tiny number of lawyers in that huge country, but now 1,800 new lawyers pass through the law school every year.’

Discussion turns to the book Hazledine wrote for Oxfam on ‘how to do everything legally’. She says: ‘The Oxfam legal team is so small that I was asked to compile a book giving charities information about the legal challenges they are likely to face when active in another country.

‘There is a separate chapter on each person the charity is likely to encounter on the other side of the desk, such as government officials, suppliers, lawyers or non-state players in conflict zones.

‘The book is about the business of being a charity. I provide checklists for charities to ensure they have ticked all the boxes. It is something practical rather than legal babble. For example, how do you lease premises in [the northern Central African republic of] Chad? What are the rules around renting property there?

‘The book suggests how to build legal strategies into charity programmes. You don’t have to be a lawyer. You just need to think about the legal issues. And then it advises charities on how best to prepare for conflict and natural disasters. This addresses the basics of international humanitarian law and advises Oxfam staff how to stay safe in dangerous environments.’

Commercial litigator, pro bono lawyer, international charity director and author – Hazledine’s career path is as eclectic as it is busy.

Visit the ISLP website for information about volunteering or requesting help.