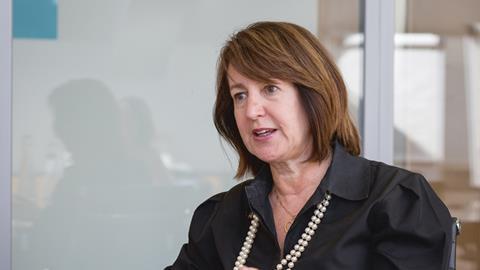 Crown Estate general counsel Vivienne King says her team did not win their seats on the various boards of the £11.5bn organisation ‘simply by stamping their feet and demanding it’. It may sound trite, she adds, but they earned their places at the table by ‘adding value, not only as legal advisers, but also as professionals who are immersed in and understand the business’.

King is keen to promote the in-house lawyer role. ‘For too long, lawyers have been labelled as advisers, not decision-makers,’ she says. ‘In truth, lawyers are perfectly competent to express business opinions along with legal opinions. It is in the DNA of all good in-house lawyers.’

She and her team work in an institution that has existed, in one form or another, since 1760. This was the year George III agreed, in return for an annual income (now called the civil list), to allow the body to manage his lands on behalf of the government. His ownership of the lands derived originally from the Norman conquest, when William laid claim to the entire country.

He and successive monarchs gave tranches of land away to favoured noblemen and the church, in the process diminishing the income they could earn from it. Nonetheless, the monarchy retains control – under the stewardship of the Crown Estate – of much of the UK’s shoreline, countryside and urban areas.

The modern Crown Estate owes its composition to the Crown Estate Act 1961, which tasks a board of commissioners ‘to maintain and enhance [the estate’s] value and the return obtained from it, but with due regard to the requirements of good management’. This has been achieved; the value of the Crown Estate’s property portfolio has doubled over the last decade to £11bn. There are eight commissioners, approved by the monarch on the advice of the prime minister. Only one commissioner, the chief executive, is full-time.

This sounds arcane, although a glance at its website shows that the estate is transparent in everything it does. It publishes award-winning annual reports and regular updates on its development projects. It also acts strictly in the public interest. Earlier this year, for example, it gave profits of £285.1m to the UK Treasury – a gift to the government and, by extension, the taxpayer.

The Gazette asks King, who joined the estate from Herbert Smith in 1994, to elaborate further on this unique institution. She says that the Crown Estate, whose holdings are made up of urban areas such as London’s Regent Street, along with rural and coastal land, and energy and infrastructure projects, is ‘not the private property of the monarch’. It comprises assets that are held ‘in right of the crown’, which is to say by a right that comes with being the king or queen, and not by private ownership. ‘It goes with whoever is the crowned monarch,’ King says. ‘It is not his or hers in a personal capacity.’

She adds that the portfolio is nearly exclusively real estate. It comprises virtually all of the UK’s seabed from low water to the 12-nautical-mile (22 km) limit, she explains. The estate also owns and helps develop the shoreline, rural land, forests, farms, quarries and mines, as well as farm cottages and more substantial listed homes. It has joint venture interests in retail parks, shopping centres and offices throughout the country.

A substantial proportion of the West End of London is under Crown Estate management, stretching from Regent Street to St James’s. It is also working with partners to improve and exploit carbon capture and storage methods, gas storage, marine aggregates and minerals, and cable and pipelines.

‘As owners of the seabed,’ King says, ‘we have partnership arrangements with companies and investors to develop sustainable wind, wave and tidal power. We are also working to make the public realm [spaces accessible to the public] a nice place to be, with art installations and pedestrianised zones.’

That is a quite range of assets and development projects. What persuaded King to leave private practice for the Crown Estate and what does she contribute?

‘I went in-house because I found that getting under the skin of my clients and supporting their business drivers was more satisfying than just providing them with legal advice. I was initially in the [Crown Estate’s] urban team, mostly doing development work. I went on to become deputy head of the legal team and then its head. In 2007, I became legal director and company secretary. I now have overall responsibility for the business’s legal requirements, corporate governance, health and safety, and sustainability.’

‘We own the whole of London’s Regent Street, much of St James’s and are investing £1.5bn developing the area through joint ventures,’ King says. ‘Our work in St James’s market is the largest chunk of public realm development in a generation. Before that, our Quadrant development at the southern end of Regent Street, which included transforming the Café Royal and the Regent Palace Hotel, was the biggest. And before that, there has been nothing of comparable size since Trafalgar Square was opened to the public in the mid-19th century.’

Outside London, the estate recently made the largest single urban asset acquisition in its history with the £345.5m purchase of the 560,000 sq ft Fosse Park shopping centre in Leicester.

This includes 340,000 acres of agricultural land and forests, residential and commercial property, mineral rights, renewable energy projects, aquaculture (breeding, rearing and harvesting plants and animals in all types of water environments), marinas, ports and harbours, and around half of the UK’s shoreline. The portfolio also includes the Windsor estate.

‘Our rural and coastal business is not just about mega projects,’ King says. ‘We have encouraged tenants to diversify into opening a farm shop or beauty parlour, for example. If they have a good business case, we will help them make a success of it.’

The Crown Estate has exploited its ownership of the seabed to develop and help sustain the UK’s renewable energy supply through wind, wave and tidal power. King says: ‘Offshore wind is available globally, of course, but the UK is top of the Ernst & Young attractiveness survey for investing in wind power. The sector is also responsible for granting rights for undersea cables and pipelines, and has 160 such assets under management.’

As King’s reference to the ‘urban team’ indicates, the Crown Estate operates through discrete teams. All work towards a common goal – growing the business while delivering sustainable long-term returns. However, the business can be broadly divided, she says, into three portfolios: urban, rural and coastal (including the Windsor estate), and energy and infrastructure. All three sectors have their own management boards on which a lawyer from the legal team sits.

‘The lawyers’ proximity to the business builds trust,’ King says. ‘They have expertise not only in their own legal sector, but also in the business sector to which they are dedicated. They are immersed in the business.’

They are pioneers too. King says: ‘We were in the vanguard of developing “total contribution” reporting.’ This is a form of integrated reporting that, when assessing the value of a business, takes into account not just its financial or property assets, but also less concrete assets such as intellectual know-how and sustainability. ‘Total contribution has now been adopted by other forward-looking businesses,’ King says.

‘It tells a clear, concise and integrated story about the business’s strategy, objectives, performance, risks and incentives. In the case of the Crown Estate, it includes the environmental and societal value we create, such as renewable power and our indirect responsibility for many thousands of jobs on top of the 500 or so employed here.’

When King became the Crown Estate’s sustainability leader upon her 2007 appointment as legal director, it marked a new departure for the business. ‘There are many threats and opportunities around sustainability,’ she says. ‘But like any strategy in a fast-changing sector, our sustainability strategy needs constant refreshing. Last year, as in previous years, we were able to reduce our carbon emissions intensity while still growing the business.’

Our discussion turns to King’s role as a trustee of the Women’s Pioneer Housing Trust. She explains that the charity, based in west London, was founded in 1920 to help single women on low incomes find affordable homes. It currently has 1,000 housing units, which is ‘quite small’, she says. Waiting lists are closed and the charity’s priority now is to devise innovative ways to increase its housing stock.

The Gazette asks why someone with a demanding job would want to take on extra responsibilities.

She replies: ‘It’s a way of making a contribution to society. You should know what the role entails before sitting on a board and then make adjustments to your life. You might, for instance, have to put off piano lessons for a while. You just have to make the time to do things if you want to broaden your perspective.’