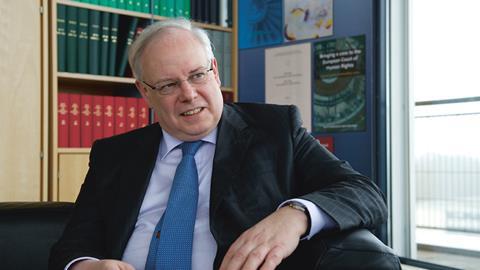 Contrary to popular belief the ECtHR does not impose its own laws on British citizens, president Dean Spielmann tells Jonathan Rayner.

It is an icy day in Strasbourg and the sole protester outside the European Court of Human Rights (ECtHR) is railing against the institution and its president, Judge Dean Spielmann.

Spielmann, the protester’s banner proclaims, presides over a ‘nest of well-paid liars, demagogues, hypocrites, parasites, criminals and monsters’. The court is a ‘brood of vipers’ and those who work there are ‘slaves of Satan’. The Luxembourgian Spielmann’s crime, the banner claims, is his membership of the ‘mafia’ currently wrecking the protester’s homeland of Romania.

The ‘brood of vipers’ to which he is referring is a court established by Europe’s human rights watchdog, the 47-member state Council of Europe, to examine alleged violations of the European Convention on Human Rights. This convention was drafted mostly by UK lawyers and closely reflects Britain’s common law commitment to access to justice. It is not an obvious focus for ‘slaves of Satan’.

There is a similar disconnect with Spielmann. He is an eloquent and humane man who is passionate about the rule of law. As for the court, one is struck by its hushed splendour, its polyglot registry and – more prosaically – its mountain of files.

There you have the paradox of the ECtHR. On the one hand, it is the wellspring of judgments that can make our otherwise thick-skinned prime minister feel ‘physically sick’. On the other, its monitoring and enforcement of the convention is credited with preventing the resurgence of dictatorships in Europe and, by and large, with maintaining the peace after two world wars.

Spielmann recalls the early part of his career, from 1989-2004, spent practising at the Luxembourg bar. He brought several cases to the ECtHR; the most high-profile being Roemen and Schmit v Luxembourg (2003). It involved a journalist (Roemen) and his lawyer (Schmit). The former had published an article claiming that a government minister had been fined for committing tax fraud and, while refusing to identify his source – a common practice in journalism – had produced documentation to substantiate his claim.

The minister responded by lodging a criminal complaint against the journalist. This culminated in the journalist’s home and workplace being searched and a letter seized from his lawyer’s office, both in an attempt to identify the source of the documentation – probably a civil servant. The court found there had been a breach of the journalist’s article 10 rights to freedom of expression, and of the lawyer’s article 8 rights of respect for private and family life, home and correspondence.

‘As a barrister, my work was not exclusively human rights,’ Spielmann says. ‘I was also involved in judicial review procedures and criminal law. But freedom of expression is very important for democracy. After the tragedy of the Charlie Hebdo murders, surely we can all see how crucial it is to have a court that, to foster democracy, advocates freedom of expression.’

The Gazette reminds Spielmann that the ECtHR stands accused by elements of the British press and, indeed, by members of the UK government, of imposing its own laws upon British citizens. ‘The court does not impose legal conditions on national laws,’ he says. ‘The UK, in common with the other signatories to the convention, has incorporated the convention’s principles into its own laws.’

He explains that any procedural or other breach that the court finds against a member state is normally a failure to comply with that state’s own domestic law. This failure, of course, is often also a breach of the convention. ‘Contrary to popular misconception,’ Spielmann says, ‘we don’t exist to review your domestic courts’ decisions and, ultimately, to quash them by imposing our own. In fact, the traffic is often the other way.’

He instances the Police and Criminal Evidence Act, which includes a detainee’s right to have a solicitor present during questioning. He says: ‘The right to be assisted by a lawyer from the first interview is now part of article 6 [right to a fair trial] of the convention. It is not a question of imposing laws. It is a question of being inspired by the values and principles shared by democratic societies.’

Nonetheless, the UK government continues to promote a British bill of rights to replace the Human Rights Act, which embedded the convention into domestic law. It is also promising an in-out referendum on EU membership. Leaving the EU would have the knock-on effect of forcing the UK’s exit from the convention. Does this concern Spielmann?

‘It would be a political disaster if any member state left the convention,’ he responds. ‘But it would be particularly disastrous if the UK, with its noble history of civil liberties, pulled out. It would give the wrong political signal to other states with less mature democracies if the state that designed the convention was to turn its back. The UK is responsible for promoting human rights all over the world.’

KNOWN FOR president of the European Court of Human Rights, 2012-15

The Gazette steers the interview to the UK prisoner voting rights case. This first aroused controversy in 2005, when the ECtHR ruled that a blanket ban on prisoners voting was unlawful. This is the case that makes David Cameron feel ‘physically sick’. He has had several opportunities to feel nauseous. Just days before the Gazette’s February visit to Strasbourg, the court ruled for a fourth time that the UK’s blanket ban on prisoner voting was unlawful. The ruling outraged many in the UK. Is it not an example of the court unilaterally imposing new law on a sovereign state? And how does Spielmann feel about the UK’s continued failure, 10 years on, to implement the court’s ruling?

‘I must stress that in most cases member states do implement the court’s judgments,’ he says. ‘Sometimes implementation is the day after the hearing, other times – for economic or political reasons – it is slower.’ He declines to comment specifically on the UK’s reasons for not implementing the judgment on the grounds that he does not enter political debates. ‘Under public international law, however, the judgment must be implemented. Failure to implement a judgment is in itself a violation of the convention.’

He moves on to the court’s October 2005 ruling in Hirst v the UK. The applicant, imprisoned in 1980 and released in 1994, was, due to his status as a convicted prisoner, subject to an automatic ban on his right to vote under the UK’s Representation of the People Act 1983. However, such a ban violated his right to free elections under article 3 of protocol 1 of the convention, to which the UK, of course, has signed up.

The court also noted that ‘when sentencing, the [UK’s] criminal courts made no reference to disenfranchisement and it was not apparent that there was a direct link between the facts of the case and the loss of the right to vote’. In addition to the UK’s violation of this right, Gibraltar, Latvia, Cyprus and Greece have all had rulings against them for violating article 3 of protocol 1.

‘Contrary to popular misconception, the ruling did not insist that all prisoners should be allowed to vote,’ Spielmann stresses. ‘It is the automatic blanket ban that is in question. The UK, in common with other member states, was required to devise a tariff that would, say, disqualify from voting those who had received long prison sentences for very serious crimes, while allowing those prisoners to vote who had committed just a minor offence and were only in jail for a short time. The UK has so far failed to put such a system of tariffs before the court.’

The controversy refuses to go away. In McHugh and Others v the UK, the court last month ruled once again that the UK’s blanket ban on convicted prisoners voting breached their rights under the convention. No compensation was awarded to the 1,015 former and current prisoners affected, and no new developments are expected until after the general election.

Spielmann moved to Strasbourg in 2004 when he became Luxembourg’s judge at the court (all 47 Council of Europe member states have a judge sitting there). He is to stand down, after 11 years, when his three-year term as president ends on 31 October. What has been the most memorable change at the court during his time there?

‘Protocol 14,’ he replies. Protocol 14 came into effect on 1 June 2010 and has significantly increased the court’s productivity and efficiency, allowing a judge sitting alone to decide inadmissibility where previously three judges were required. The court’s response time and its backlog of unexamined cases were swiftly reduced. In the first nine months of 2011, just 20 single judges issued 30,779 decisions – a 35% increase on the same period in 2010.

‘We have brought the court docket of pending cases down to a more manageable level,’ he says, ‘and expect to have no backlog of inadmissible cases by the end of 2015.’

How about the backlog of urgent cases? ‘We have a well-developed priority policy in place,’ he says. The court no longer deals with cases on a chronological basis, but according to their urgency. The most urgent cases are where there is risk to the life or health of the applicant, or to the well-being of a child, or the danger of torture or inhuman ill-treatment: ‘Our prime concern is very grave human rights violations.’

Is there anything he would like to add? ‘I have been extremely impressed during my 11 years at the court by the high quality of legal assistance from the registry [lawyers who provide legal and administrative support to the court]. We have so many excellent lawyers in the registry from member states to help us understand their domestic law.’