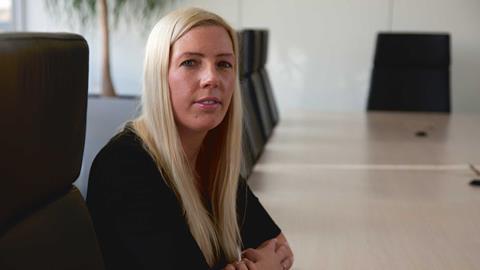 Solicitor Rebecca Bell is UK general counsel of Australian firm Slater & Gordon, the world’s first law firm to be publicly listed. In the last two years she has project-managed its UK arm through the process of becoming an alternative business structure.

She has also helped steer it through several UK acquisitions, from its takeover of national firm Russell Jones & Walker (RJW) in early 2012, to the acquisition of the ‘personal legal services’ practices of Manchester firm Pannone last November.

Such rapid growth, with headcount almost trebling in under two years, ‘poses threats and opportunities’, Bell says, as she and colleagues ‘try to break the mould’ in a legal services sector that is constantly evolving. Due diligence is more important than ever, she says, and the firm’s listing on the Australian stock exchange also brings its own set of challenges.

‘It is not a day-to-day problem,’ Bell says, ‘but listing on the Australian stock exchange requires us to have a more formal structure. Listed status is very prescriptive about roles and the delegation of authority. Confidentiality is even more important for a listed firm than it is for an “ordinary” firm. We can’t share management information with staff, for example, until after it has been announced to the stock exchange. There is a separate general counsel on the Australian side of the firm, of course, who has the training and experience to advise us.’

The firm was one of the first to gain an ABS licence in April 2012. Why was it so keen to be a pioneer? ‘It was more a way of getting outside investment into the firm than exploring a new practice model,’ she explains. ‘RJW, before it became part of Slater & Gordon, had looked at private equity but decided that the quick turnaround was not for us. A number of trust funds have invested long-term in us, which gives us stability. We also now have the weight of a publicly listed firm behind us.’

Bell tells the Gazette about her route to becoming general counsel. She joined RJW after completing the Legal Practice Course and worked on the firm’s legal helpline for two years. ‘The helpline was set up in 2001,’ Bell recalls, ‘and provides legal guidance on every conceivable personal law area, such as consumer, criminal, education, family, landlord and tenant, neighbour disputes, employment, personal injury and motoring offences.’

Law graduates staff the helpline, which is a service provided to registered members, such as trade unions and insurance policyholders. ‘It is excellent preparation for a career in law,’ Bell says.

After her two-year stint on the helpline, she was offered a training contract in 2005 under the supervision of RJW managing partner Neil Kinsella. ‘It was a whirlwind,’ Bell says. ‘In addition to litigation and other seats, I was helping develop a new personal injury model, scoping out processes and determining which were profitable and which weren’t.’

Her training also brought Bell some experience of project management so that after she was admitted to the profession in 2007, Kinsella sent her on a training course to gain Prince2 qualification.

Prince2 enables project managers to keep tighter control of resources and to manage business and project risk more effectively. The training was put to good use when RJW’s lawyers, in anticipation of the Legal Services Act, the Jackson costs reforms and other developments likely to affect the firm’s business, were asked to come up with new ways of providing a profitable legal service.

‘Our lawyers spent a lot of time modelling Jackson ahead of time,’ Bell says. ‘By preparing for the inevitable, you stand a chance of finding new ways to generate work and maintain your place in the market. I was inundated with ideas on how to develop non-personal injury practices, such as new insurance products, and fraud and regulatory projects.’

When Slater & Gordon acquired RJW in January 2012 for £53.8m, Bell oversaw the team that carried out due diligence before the deal could be announced. She then went on to project-manage the newly created UK side of Slater & Gordon becoming an ABS, working closely with the Solicitors Regulation Authority to ensure the process went smoothly.

‘The SRA was fantastic,’ she says, ‘constantly liaising with us on what works and what needs to change. Its whole approach was collaborative and commercial, and its relationship managers were proactive and well-informed.’

BORN Military base in Germany, moved to UK aged six

Bell says that headcount before gaining the ABS licence in April 2012 was 450. It has now climbed to 1,200, including 700 lawyers in Manchester. She adds that the acquisitions have led to the firm ‘inheriting’ senior lawyers who can mentor junior lawyers looking for career progression and who also bring with them new ways of practising.

‘We are used to “no win, no fee” arrangements, but through acquisitions have learned what else clients are happy to allow by way of commissions and costs,’ Bell says. ‘For instance, we learned that many clients don’t mind lawyers retaining medical commissions when expert medical advice is sourced.’

Slater & Gordon is ‘not risk-averse’, Bell says. ‘We are willing to take the risks that we recognise and understand. That is how all business, including the business of law, works. If funding is static, then we have to examine the existing scenario and take the risk of investing in the development of an alternative one. There is more to the law than just being the best fee-earner in the world. We also need to bring in new work and promote the brand.

‘Clients now want more for their money. We have to interact with them the way they want to work, rather than the way we want to work. It’s all about change, whether it is fixed fees or internet consultations in place of face-to-face meetings.’

On the subject of change, does the constant stream of acquisitions over-stretch the firm’s resources? ‘We originally used our own in-house skills, but last year formed a bespoke mergers and acquisitions (M&A) team,’ Bell explains. ‘It has set up an efficient process for carrying out due diligence.

In addition, the firm has developed a process for helping clients understand the implications of their legal services supplier being acquired by us. Clients can be left confused and uninformed by the transfer. Should they go with us or find another supplier? Keeping clients in the loop is in the code [of conduct], but sometimes the correct procedure gets lost in the excitement of an M&A transaction.’

Bell tells the Gazette about the firm’s national practice standard (NPS), which lays down the rules and procedures to ensure every member of the team conforms to the highest professional standards.

‘The NPS aims to make Slater & Gordon’s people proud to be professionals. This is particularly important in the personal injury field, where practitioners have come in for a lot of criticism because of claims managers and farmers, as well as ambulance chasers and advertising in hospitals. Our obligations are first to the courts, then to clients and then to investors. And that is where we want our clients to be – at the centre of everything we do.’

After the ABS application process, and in between acquisitions, does she find much else to do?

‘As well as general counsel, I am also the firm’s compliance officer for legal practice,’ Bell replies. ‘The two roles combined mean I am responsible for all aspects of corporate governance for the firm, including its associated companies and brands. I manage the firm’s intellectual property portfolio, deal with all corporate and commercial agreements, oversee partnership matters and work closely with business, quality and risk to ensure compliance across the firm.’

What you might call a full in-tray? Bell nods and smiles.

Over the years the firm has handled some of the most complex and widely publicised cases in Australia. These include representing hundreds of asbestos miners at the Wittenoom mine in Western Australia. In 2000, the company lodged a writ in the Victoria Supreme Court against Broken Hill Proprietary Company on behalf of traditional owners in Papua New Guinea over the collapse of a dam that led to waste from the Ok Tedi Mine polluting the Ok Tedi and Fly Rivers in 1984.

Other cases include representing victims of medically acquired HIV from contaminated blood supplies, and women suffering health problems due to faulty IUDs and breast implants.

In December 2005, the firm negotiated a settlement worth around £2.5bn on behalf of unions and people suffering from asbestosis, mesothelioma and other asbestos-related diseases as a result of exposure to asbestos while working for James Hardie Industries Ltd.

James Hardie was one of a number of companies involved in the mining of asbestos, and by the middle of the 20th century had become the largest manufacturer and distributor of building products, insulation, pipes and brake linings containing it.

Slater & Gordon is Australia’s largest consumer law firm, operating from 61 locations across the country. It entered the UK legal market with the acquisition of national firm Russell Jones & Walker in 2012.