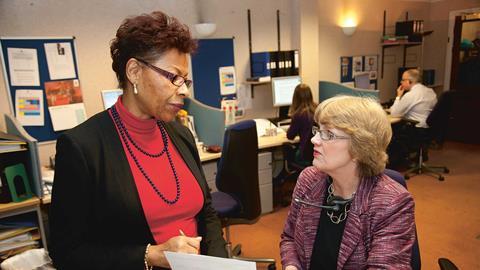 The Law Society’s Practice Advice Service answers tens of thousands of questions each year. No two calls are the same.

It is a service for solicitors delivered by solicitors and is celebrating its 25th anniversary this month. It is, of course, the Law Society’s Practice Advice Service (PAS), which receives more than 35,000 enquiries from members of the profession every year. These enquiries encompass the whole gamut of challenges faced by solicitors in their day-to-day legal practice, from advocacy to probate and social welfare, and from fixed fees to law firm management, money laundering and professional ethics.

Complementing the telephone advice, the PAS team also publishes a series of booklets and provides a multi-party action information service, with details of potential and actual actions and a list of firms that have registered their involvement in such actions. And it holds information about other helplines for solicitors, such as the professional indemnity insurance helpline and the Law Society library helpline, which provides free help with requests for legal information.

The team comprises 10 solicitors, all with current practising certificates and with a combined total of 171 years’ post-qualified experience. Barbara Mackintosh has been part of that team for almost 20 years, having previously worked in private practice for six years prior to taking maternity leave. She tells the Gazette: ‘Even after 20 years there is still a frisson of excitement every time I pick up the telephone. You never know what the next call is going to be about.’

The profession seemed ‘calmer’ back in the early 1990s when she joined the PAS, she says. There were no conditional fees in those days, and it was many years before 2007, when the anti-money laundering regulations came into force with the threat of up to 14 years in jail for any solicitor who failed to comply with them.

Mackintosh notes: ‘There’s always something new, but I have come across some extraordinary cases.’ She recalls the solicitor in a probate matter who was halfway through the process when the testator, looking very much alive, walked into the firm’s reception area. ‘The solicitor was at a loss what to do next,’ she says.

She gives other examples: ‘What do you do when you are acting for the wife in a divorce and she says her husband has been fiddling his taxes? Or when your clients are selling their house, should you as the conveyancing lawyer report that it is haunted or that a murder has taken place there?’

In fact, conveyancing is Mackintosh’s specialist area, though in common with everyone on the team she is insistent that a ‘wide general knowledge’ is key to providing a good service. ‘We are constantly having to swap from topic to topic, from costs to conveyancing to money laundering and back again,’ she says. ‘The caller has often discussed the matter with colleagues or researched it beforehand, whereas we are going into it cold. We need to probe a bit and listen a lot to get up to speed and understand the issues involved.

‘Most importantly, we need to show empathy. Sometimes callers are in tears, wondering whether it was something they had done wrong. We are all solicitors ourselves and have been in similar situations, so we quickly try to make it clear that we understand and know what they are going through.’

Anjali Mouelhi, who was in private practice for 15 years and has more than 22 years’ PQE, joined the PAS in 2008 and became the team’s technical adviser and de facto head in July 2013. She runs an efficient operation. Advisers are rotated annually from specialist area to specialist area so that they can substitute for one another in the event of sickness, holiday or a colleague working part-time.

Advisers are given regular breaks from answering telephone enquiries so that they can read up on new legislation or changes to the code of conduct. They may also need to research – often with the assistance of the Law Society’s library – the more complex queries.

They are expected to write pieces for the PAS section of the Law Society’s website, such as guidance notes and question-and-answer briefings. They are required to write articles for the Law Society’s Sections, which include family, property, law management, private client, advocacy and competition. And they are also expected to spot developing trends and ensure that the team is ready to answer any consequent spike in enquiries.

In common with the other advisers, Mouelhi says she can personally advise on a wide range of legal practice areas, instancing criminal, family, conveyancing, medical negligence, and wills and probate. However, she has made a speciality of banking, a sector that has kept her busy since the crisis broke in 2008.

I’ve had distressed members in tears,  usually sole practitioners or lawyers in a small department with nobody to unload upon

One area of particular concern to lawyers, says Mouelhi, was the government’s savings compensation scheme, which aimed to protect individual savers from losing money if their building society or bank went to the wall. The upper limit for indemnifying savers was raised in October 2008 from £25,000 to £50,000 and then again on 1 January 2011 to £85,000.

‘Callers wanted to know how these limits impacted on client accounts,’ she says. ‘A firm holding deposits for several conveyancing transactions could easily exceed £85,000. Would each individual client’s deposit be individually protected? And if so, what if the client had a personal account at the same bank which pushed his or her combined balance to over £85,000?’

The wholesale culling of firms from banks’ lender panels prompted hundreds of calls, as did banks demanding unreasonable undertakings that solicitors could not realistically expect to meet. Mouelhi says: ‘The profession was united on the latter issue. We lobbied hard and got a result. It was good to make a real difference.’

Royal Bank of Scotland’s summer 2012 computer meltdown, when tens of thousands of the bank’s customers were unable to gain access to their money, also kept Mouelhi and her team busy. ‘Solicitors were calling in to say that their clients were sitting in removal vans unable to move into their new homes because they couldn’t get hold of the money to complete,’ she says.

Beccy Cope is one of the newest members of the team, having joined PAS in July 2013 after nine years in private practice in Leicester, where she specialised in private client, tax and trusts. ‘I had to do a tremendous amount of reading to get up to pace with other areas of practice,’ she tells the Gazette. ‘But that’s what is so invigorating about the job. It never becomes stale because no two calls are the same and so you can’t simply replicate answers. I’ve had enquiries about criminal procedure, employment tribunals, immigration and even private client.’

Confidentiality is the cornerstone of all PAS communications with callers. However, on the strict condition that the Gazette does not hear the caller’s voice or what he or she says, or can in any other way identify the caller, Cope allows me to sit beside her why she takes some calls. After identifying herself, there is a long silence as she listens hard. It is a criminal matter and a complex one, but she volunteers no further information to me. She tells the caller: ‘Email the details and we will look at the situation on your behalf. We aim to look at all emails within a day and will come back to you.’

She says: ‘As a solicitor myself, I know what it’s like to try and get things done within time constraints.’

The next call also begins with a long pause as Cope listens. It is a conveyancing matter, she later relates, that concerns a lender. The call is duly transferred to Mouelhi, the team’s lender specialist. Cope says: ‘Callers often want to get straight to the meat of the matter and, rather than interrupt and disrupt the flow, we let them talk until we get a feel for the problem. It’s only then that we ask them for the salient points.’

The third call also starts with hard listening. It concerns civil litigation and a contract and the question of what happens if there is no after-the-event insurance in place. The caller is urged to call back once he or she has the relevant information to share with PAS.

These three calls were straightforward compared with some Cope has received. ‘I’ve had distressed members in tears,’ she says, ‘usually sole practitioners or lawyers in a small department with nobody to unload upon. It helps that we have all been in private practice. We are independent from the caller and, having isolated the crucial issue, can give impartial advice. But at the same time, we can show empathy with the caller – we have been there and done that, too.’

Does all this sound too good to be true? The Gazette spoke to a 14 years’ PQE solicitor who has consulted the PAS ‘around a dozen times’ during his career and is happy to be quoted so long as his identity is not divulged. ‘There is immediate empathy,’ he tells the Gazette. ‘You are never made to feel like an idiot or timewaster.’ His calls have generally been about practice and procedure, and often overlap with the professional ethics helpline run by the Solicitors Regulation Authority, he says. ‘The PAS has always been helpful, a lifeline for when you really don’t know what to do next.’

Other PAS clients, who also prefer not to be named, were equally full of praise. One said: ‘I was delighted to be able to speak to someone immediately who clearly understood private practice and could give me an immediate response to my situation, rather than having to wait for a call back or having to put my query in writing.’ Another said: ‘The adviser was knowledgeable, had empathy with the issues I sought guidance on and dealt with the matter very efficiently, signposting me to the relevant colleagues to address the particular query raised.’

All of this sounds eminently sensible. So why do trainees refer to the PAS as the ‘magic line’? Sonia Aman, who has been an adviser for some 10 years and leads in compliance and outcomes-focused regulation, explains: ‘Some trainees will call us rather than reveal their ignorance by asking someone senior in their firm what might seem a stupid question,’ she says. ‘The relief in their voices is wonderful to hear. It’s one of the many rewarding aspects of our job.’

Other helplines for solicitors