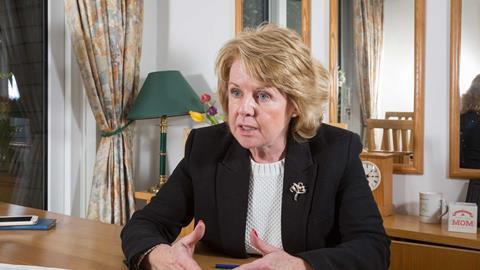 A story of triumph over adversity warms the heart and Ann Crighton’s is no exception. Her first experience of the law, after leaving school aged 16, was in a typing pool at the Treasury Solicitor’s Department (now the Government Legal Department). ‘It was so boring that it should have put me off the law for life,’ she says. But undeterred, she was to progress to legal secretary, legal executive, solicitor and, latterly, barrister. ‘It was tough juggling all that with being a single mother,’ she recalls. ‘Working by day and studying at night isn’t a career path I’d recommend to anyone.’

There were money issues, too. ‘I had to take a year out of work while preparing for my Law Society Finals. I wasn’t earning anything and so couldn’t pay the mortgage.’ Her solution was a novel one. ‘I took in two lodgers and they paid my bills.’ Another time she provided free accommodation to a woman who, in return, agreed to drop off her son at nursery and babysit three nights a week: ‘If my son was too ill for nursery and I had to go out to work, she would look after him until I was able to get home.’

Crighton’s determination paid dividends. She enjoyed 20 years at the Crown Prosecution Service, rising from Crown prosecutor to senior Crown prosecutor and then becoming, in 2000, ‘one of the CPS’s first home-grown Crown advocates’. (Crown advocates, who are usually barristers, have rights of audience in the higher courts.) She also found time to climb through the ranks to national convenor of the CPS lawyers’ trade union and to sit as a member of the Employment Tribunal. She took voluntary redundancy from the CPS in July 2013 but, missing ‘the cut and thrust of advocacy’, was called to the bar in 2015 and nowadays works as a barrister from her own chambers, Crighton Chambers.

Did it have to be such a relentlessly uphill struggle? ‘Hindsight is a wonderful thing,’ Crighton responds. ‘If, when I was 16 or 17, someone had told me that it was possible for the daughter of working-class Irish immigrants to become a lawyer, and not just a secretary or shop assistant, then maybe I would have taken an easier path. I would have gone to university – there were still student grants in those days – had a good time while studying and qualified in the conventional way. But it wasn’t to be.’

You start out expecting to deal with kids who should have been put down at birth, but quickly come to realise that so many of them are more sinned against than sinning

Why choose the CPS over private practice? Crighton replies that she had intended to specialise in conveyancing, but that ‘the bottom fell out of the housing market’ after the Conservative government abolished double tax relief [tax relief for two people where both were buying the property] for mortgages in 1988. She remembers: ‘I wrote to literally hundreds of law firms, sometimes 20 to 30 letters a day, looking for a position. Mostly, I got no reply. One firm that did respond wrote, “Dear Miss Crighton, We have no job for you here”, which was terse, but to the point.’

She began looking at other areas of practice and eventually secured a ‘casual’ role at the CPS on a contract that required renewing (or otherwise) monthly. ‘On the final Friday of every month, I found myself wondering whether I would have a job to go back to on Monday.’ The contract lasted a year, whereupon she successfully applied for a full-time position as a prosecutor.

Crighton paints a rosy picture of her early years at the CPS, describing a properly functioning system. ‘I was allocated a police station, Ealing, and dealt with every type of crime, from having no car insurance through to murder. I would go to Ealing Magistrates’ Court, where I got to know the magistrates, district judges, defence solicitors and staff well. I knew the local police, too, and that PC X produced good files whereas PC Y’s were a mess.’

By the time Crighton left the CPS some 20 years later, it had descended into what she describes as ‘madness’. She complains: ‘Management would send you to any court in London, from Camberwell to Hendon, regardless of where you lived or your childcare arrangements. You would often be seeing a file for the first time on the very day of the court hearing. And this after half a dozen other prosecutors had already wasted their time reviewing it.’

So why did management change a successful way of doing things? Crighton shrugs. ‘Decisions about the day-to-day running of the CPS were delegated to business managers, who weren’t lawyers and had no understanding of how we work. It was a creeping process. It began with our being split into specialist units. There was the Bailey unit, which was for murders only. Other units looked after fraud, youth crime and the rest. We would be sent to deal with our specific area of expertise in any court in London.

‘This meant we no longer dealt with a variety of offences, of course, which made the job less interesting. The theory was that we would become more expert in a niche area. The reality was that we were on a treadmill, going into court with a cursory knowledge of the case and no inside knowhow, for instance, that a witness was unavailable because he was on holiday. But what really annoys me is being a CPS prosecutor could be one of the best jobs in the world, with the satisfaction of doing a valuable job for society while pursuing an intellectually stimulating career. But poor management has turned that into a pipe dream.’

Crighton’s story chimes with the debate raging about the CPS’s shortcomings, which partly reflect poor morale and deep budget cuts.

But back to happier times. Crighton spent around 20 years at the CPS, which implies there was once much to recommend it as a career choice.

What were the highlights? She recalls: ‘I was transferred to the youth unit for six months, but stayed there for 10 years and loved it. You start out expecting to deal with kids who should have been put down at birth, but quickly come to realise that so many of them are more sinned against than sinning. Their parents are often drug addicts or alcoholics, for example, and have let them down badly. They had resorted to stealing car radios or whatever just to survive.’

It’s a real joy nowadays to go to court with just the one file, which I’ve read and understood, and can address the bench really knowing what I’m talking about. With the CPS, you were constantly forced to wing it

There were moments of humour, too: ‘We were having difficulty identifying a particular offender until we spotted his name tattooed on the back of his neck.’

And regrets? ‘I prosecuted a 17-year-old boy of a good family who had never been near the police before getting himself caught up in the August 2011 riots. He was doing his A-levels and hoped to go to university. He’d handed himself in to the police and made a full confession, but was sentenced to 18 months’ custody. I had tears in my eyes. The sentence was disproportionate, as were many sentences at that time, largely because David Cameron and other senior politicians had called for the rioters to be severely punished. He was put in a police van with a member of the Murder Dem Pussies gang [West London drug dealers notorious for violence].’

The interview turns to Crighton’s trade union activities. A tiny proportion of the country’s 100,000-plus solicitors are members of a trade union. Why do CPS lawyers, in particular, need the support of their own union? And why did Crighton become involved? ‘[They] are civil servants and so are members of the FDA [formerly First Division Association] CPS section. Prosecutors aren’t treated significantly worse than other employees, but I believe in trade unions and there is always a role for them in the workplace.’

Crighton’s typical workload as a trade union representative comprises ‘reasonable adjustments for people struck down with a disability. Bullying and harassment. Stress from excessive caseloads. It’s a familiar story in many industries. The union’s role is to try and alleviate or solve the problem’. Crighton’s union work allowed her to develop her knowledge of employment law, which in turn led to her appointment as a member of the Employment Tribunal.

It was in some ways a natural progression for Crighton to join the bar. But after around 20 years’ prosecuting, isn’t becoming counsel for the defence a case of poacher turned gamekeeper? ‘I had a two-year sabbatical so I could spend time with my son, but advocacy is what I like more than anything else and so I became a barrister.’

The transition, she explains, was made easier because as a solicitor with higher rights of audience she was exempt from pupillage. She continues: ‘I joined a chambers at first, then decided to go it alone and self-clerk [source her own work]. My background as a secretary makes it second nature to send out bills and do other administrative tasks. And because I’ve been prosecuting for 20 years, I know what the prosecution should be doing and can spot any holes in their case.’

She summarises: ‘It’s a real joy nowadays to go to court with just the one file, which I’ve read and understood, and can address the bench really knowing what I’m talking about. With the CPS, you were constantly forced to wing it.’