Having missed the opportunity to join the Royal Navy, I attended Durham University to study Law, English and Psychology. Fast forwarding through travel and completing articles at Gray’s Inn, I answered an advert in The Times for a marine/shipping lawyer – ‘no previous experience required’. The rest, as they say, is history. 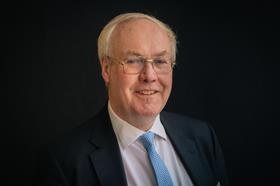 My interest in autonomous ships lies in the legal and regulatory challenges that a new concept of ships/shipping will bring. Robotics and autonomy pose fundamental questions for regulators.

My experience in loss prevention, legal risk management and (re)insurance of maritime trade/transport led me to join the government’s Maritime Autonomous Surface Ships Regulatory Working Group in January 2016. Arguably, the last major revolution in international shipping law involved the ‘rules of the road’ in the 1830s, when steamships were sailing among wooden sailing ships and rowing boats. Autonomous, unmanned and remotely controlled ships are being constructed in Asia, Europe and the US. There is no appropriate framework for these ships in international waters. Technology is moving at a much faster pace than regulation. A brave new world of cybersecurity and data protection also has to be addressed.

Clarification of the international legal and regulatory framework is urgently required, as was recognised by the nation states of the Maritime Safety Committee in 2017, following a paper led by the UK, of which I was one of the editors.

Surprisingly, there is no generally agreed definition of a ‘ship’. This has systemic repercussions for past and future legislation, especially where new technologies are being addressed. Under many different international legal instruments alongside ‘ships’ and ‘shipping’, there are references to ‘seagoing vessels’ and ‘waterborne craft’, which urgently require clarification.

I am working with the Institute of Maritime Law at Southampton University, and the Comité Maritime International on ‘nautical nomenclature’. Analysing the different definitions used in 50 or more different International Maritime Organization legal instruments used by 172 nation states, we expect to publish our findings in the spring.

Being an after-the-event insurance underwriter offered a fascinating insight into the legal profession. For example, I had the responsibility of underwriting the whole of Carter-Ruck’s commercial account, which included all insured claims then being made by their clients.

I have a particular interest in access to justice for meritorious claims made by impecunious claimants (and defendants from time to time), in circumstances where legal aid is almost non-existent.

As a commercial litigator interested in dispute resolution, my highlights have been when instructed by a client to clarify or to make new law in the Admiralty/Commercial Court.