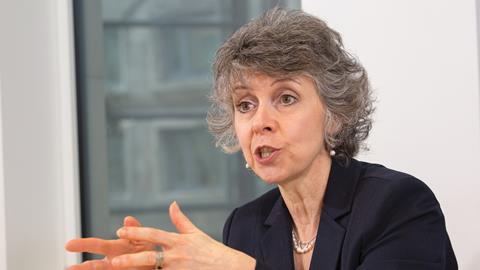 A career shaped by being ‘unreasonable’ has seen solicitor Alexandra Marks reach the higher ranks of the judiciary and win a Law Society Lifetime Achievement Award. But how could she succeed in so cerebral a calling as the law without the application of reason? Marks paraphrases George Bernard Shaw: ‘Being unreasonable and questioning the status quo opens the doorway to progress.’

It is a formula that has worked. For 20 years she was a partner at magic circle firm Linklaters, where she remains a consultant. She is a deputy High Court judge and sits as a recorder (crime and civil) on the South Eastern Circuit. She is a commissioner at both the Judicial Appointments Commission (JAC) and the Criminal Cases Review Commission (CCRC). She chairs the Prisoners’ Education Trust (PET) board of trustees and is a council member of law reform and human rights charity Justice. Earlier this year she was named one of Debrett’s 500 most influential people in Britain.

Marks’ interest in law was in part sparked by the 1970s ITV series Justice. A law degree and articles followed, by which time, she says: ‘I was certain that I didn’t want to work in the City, with its grey buildings and men in grey suits pushing paper around.’ Nonetheless, she became an assistant commercial property solicitor at Linklaters – 33 years later she is still in the firm’s City office.

Her career at Linklaters was mostly mainstream commercial property and property finance, acting for clients such as banks, funds, development companies and local authorities. The transactions ranged across investment sales and purchases, financings, privatisations, securitisations and railway franchising.

Asked about the high points of her time at Linklaters, she recalls her work on rail privatisation in the mid-1990s. ‘It was hugely complex,’ she says. ‘Previously, everyone simply worked for British Rail. Now there were hundreds of railway stations available to lease to private train operating companies. These companies in turn wanted to sublet shops and sandwich bars on the platforms. Then there were the miles and miles of land that the railway line went over. Who’s responsible for signal boxes? Or level crossings? Who owns what and what can they do with it? What are the boundaries between stakeholders? There were hundreds of lawyers involved.’

Another highlight was her involvement in the sale of a large tranche of London’s Mayfair by a pensions trust to a foreign buyer. ‘The names were so familiar, it was like Monopoly with real money,’ she says.

What prompted her to embark on a career in the judiciary? ‘Ultimately, it was my work with Amnesty International,’ she says. ‘As a law student, I was committed to justice and the right to a fair trial. It seemed only natural to join Amnesty as a volunteer. I became a London regional representative and was sitting on the council while still in my twenties.

‘But, in my naivety, I thought that the mere act of qualifying as a solicitor, plus experience gained from extra-curricular activities, was all that was required as an “open sesame” for ever greater opportunities. I actually didn’t know that solicitors could become judges. It was only when Marie Staunton, then UK director at Amnesty, asked me why I didn’t become a judge that the penny dropped. I’ve been telling solicitors ever since, through the JAC, that they can become judges.’

Marks has sat as a recorder (crime and civil) since March 2002. A recorder is a part-time judicial role designed to give the incumbent the necessary experience to become a full-time judge. In March 2010 Marks became a deputy High Court judge. She sits in the Administrative Court, part of the judiciary which reviews decisions made by people or bodies with a public law function, such as local authorities and regulatory bodies. It can carry out a judicial review of decisions made by other courts, tribunals and public bodies, and hear challenges to decisions brought by certain people or bodies (such as ministers or local government) where legislation has given the right to challenge.

‘It has a David and Goliath dynamic,’ Marks says. ‘The individual versus the full weight of government authority. It is rewarding work from a justice point of view because you are using legal tools to right a wrong. It is quite different from the satisfaction you get from large retail transactions, such as rail privatisation or property sales in Mayfair.’

She recalls one case where a young Eritrean woman had made the perilous journey from Libya across the Mediterranean Sea to the southern Italian island of Lampedusa. Her parents were dead and the uncle she had travelled with was presumed drowned. She was taken to a refugee camp where, unlike her friend, she was able to escape being gang-raped. She fled the camp, stowing away on a lorry, but was soon picked up by the authorities.

‘The legal issue was around whether or not she was, as she claimed, a minor,’ Marks explains. ‘We found that there were flaws in the way a lower court had assessed her age. In May 2015, we concluded that her account of her journey and circumstances was consistent and credible, and that she was underage at the time. Justice prevailed.’

The second decade of the 21st century has been one of constant achievement. In October 2013 Marks scooped her ‘dream job’ of CCRC commissioner. ‘The criminal cases we review are not exclusively murders and rapes,’ she says. ‘We also review, for example, convictions for driving and parking offences.’

Nonetheless, the cases she remembers most vividly do concern the most serious crimes. One involved Jonathan Embleton, who had been convicted of murder and spent 16 years in prison before the CCRC concluded that the Court of Appeal was likely to rule that his conviction was unsafe. An expert witness who was key to the original trial had been discredited and another was shown to have given inconsistent evidence. The case against Embleton was dismissed in December 2016.

The CCRC, Marks adds, does not always succeed in winning freedom for a convicted person. ‘A Bristol woman, Kerry Holden, was sentenced to 18 years for murder despite someone coming forward and confessing to the crime,’ she says. ‘We thought that was enough to raise a doubt about the safety of the conviction, but in February the Court of Appeal ruled that the confession – because the person making it was mentally ill at the time – was not reliable. Holden remains in jail.’

Incarceration informs Marks’ work as chair of the board of trustees of PET, a position she assumed in October 2012: ‘Most ex-prisoners are too old or unskilled to get a meaningful job, but education gives them the benefit of a new identity. It enables them – even without a job, which can be difficult to find with a criminal record – to be better parents, volunteers or students.’

Marks gives examples of PET’s most notable success stories. Graham Godden is a former armed robber who was once among the most wanted criminals in the country. His backstory is familiar: in and out of a succession of foster homes and leaving school without qualifications. Now freed from prison and with the help of PET, Godden has a degree and has set up the Youth Empowerment Scheme (YES).

YES aims to make a difference for young people disengaged from education, excluded from mainstream school or displaying problem behaviour. YES programmes, delivered by ex-offenders, strive to reach some of the most challenging groups.

Another success story is the former prisoner who, having served a life sentence, is now sitting on the board of PET with the aim of helping others avoid his mistakes.

Marks says: ‘Most law-abiding adults find habitual behaviour, such as smoking or drinking to excess, hard to kick. And yet ex-prisoners are expected to change the habits of a lifetime with minimal support. PET reassures them that someone is listening and is on their side.’

Marks is perhaps best known to the solicitors’ profession as the solicitor member of the JAC, a position she took up in January 2012. ‘The composition of the judiciary should reflect the composition of the society it serves,’ she asserts. ‘That’s one reason why all commissioners, myself included, are committed to diversity on the bench. Society comprises people of differing gender, ethnicity, social background, disability, sexual orientation and the rest. The judiciary should be the same. It is no longer the exclusive preserve of privileged white men, but they are still over-represented on the bench – particularly so in the higher echelons of the courts.’

We return to the subject of Marks’ ‘unreasonable’ persona. ‘The thesis,’ she states, ‘is that if you are amenable and unwilling to speak your mind, then you can’t really expect things ever to change. You need to stand up for your point of view and challenge the status quo. You need to say that things aren’t the best they can ever be, but can be improved. You have to stick your neck out to change things and not simply accept that if something ain’t broke, there’s no good reason to fix it.

‘Take flexible or agile working. Some people might ask what’s wrong with a nine-to-five working day – it’s suited the labour force for years and brought prosperity in its wake. An unreasonable person might challenge that perception. Why are we committed to the nine-to-five model? What’s wrong with a more flexible model that is malleable around people’s lives? This approach won’t always make you popular because being unreasonable challenges people’s assumptions. But as George Bernard Shaw said in 1903: “The reasonable man adapts himself to the world; the unreasonable one persists in trying to adapt the world to himself. Therefore, all progress depends on the unreasonable man.”’

There is scant reason to dispute so compelling an argument.

The Law Society Excellence Awards celebrate and recognise individuals, teams and organisations that have truly excelled. There are 19 individual and team categories to win. Enter online today at www.lawsociety.org.uk/excellenceawards. Nominations close on Friday 26 May.