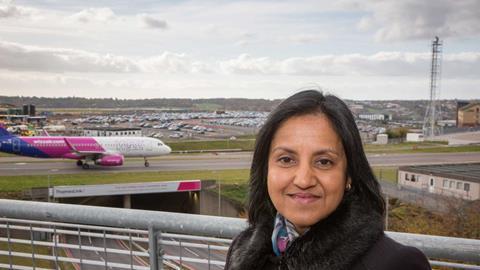 Swati Paul, general counsel at London Luton Airport Operations (LLAO), evokes the milieu of her job: ‘An airport is like a small city.’ Paul, who won this year’s Law Society Excellence Award for in-house, explains: ‘This airport has its own police force and fire service, its own retail, catering, bus and taxi contracts, and its own security rules and regulations. Hundreds of people earn their livelihoods here and, in August of this year alone, a record 1.6 million passengers flew through. An airport is a vibrant, exciting place to work.’

Paul joined LLAO in May 2015, by which time the £110m Project Curium to redevelop and expand the airport terminal was already in train. The works are expected to increase the airport’s annual capacity by 50% from 12m to 18m passengers by 2020, while adding an extra 10,000 jobs and £1bn per year to the UK economy by 2030. New roads in and out of the airport have been built, as has a new multi-storey car park.

The airport is also working in conjunction with Luton Borough Council to build a Direct Air to Rail Transit (DART) line, a railway line to replace the shuttle buses that currently carry passengers from Luton Airport Parkway rail station to the airport itself. The DART, it is claimed, will help provide a less than 30-minute link between central London and the airport. This compares, according to the airport’s website, with an average train travel time of 40 minutes plus 10 minutes on the shuttle bus.

‘It’s a huge construction project,’ Paul says, ‘with all sorts of issues that, as GC, I must be alive to. We have a very capable set of project managers and so my role is primarily to negotiate contracts. And also to ensure that the rights of everyone – that is, airport staff, airlines, builders, police, firefighters, investors, the public, retailers, caterers – are protected.’

Project Curium is indeed ‘huge’, but it was not Paul’s work on this that won her an Excellence Award. That distinction was reserved for, in the words of the judges, her contribution to an ‘innovative project to introduce (to the airport) a new ground handling model’. Ground handling describes the various tasks undertaken when the aeroplane is on the ground, either having just landed or about to take off. These tasks include the provision of aircraft steps so that people can embark and disembark, as well as putting in place mechanised luggage loaders and unloaders, chocks to stop the aeroplanes from rolling away, and cones and fences to guide passengers.

The ‘innovative’ aspect of the project that Paul worked on was the collective pooling of ground handling equipment, so that the same equipment is shared by all airlines using the airport. Hitherto, each airline used its own equipment, which would normally have to be moved from one area of the airport to another, depending on where the aircraft had landed. This was a time-consuming procedure and also risked collision damage to the equipment and, in the worst cases, to the aircraft itself.

The benefit of the sharing arrangement is that the ready availability of equipment reduces congestion and improves aircraft turnaround time. It also lessens the risk of collision damage as the equipment no longer needs to be moved any distance. The airport’s head of airside Liam Bolger is generous in his praise of the new ground handling model. Recent statistics reveal a 98% decrease in equipment damage and a 40% reduction in congestion on stand (where the plane is parked after landing or prior to take off). He adds: ‘The project is a real industry first. No other airport in the world has taken the concept of equipment sharing to this level.’

The Excellence Awards judges said: ‘Swati (Paul) impressed the judges by going over and above her day job to understand the needs of her business to devise a legal structure that was fit for purpose for this project. As a new GC, she used her skills as an in-house lawyer and business partner to assess the situation, using her understanding of operations and commercial drivers, communication skills, collaboration with stakeholders, lateral thinking and legal expertise.’

Paul has also won praise from the air transport industry for designing a ‘novel legal structure (that) is robust and delivers the appropriate checks and allocation of risk, ensuring that standards and prices are maintained as efficiencies are realised’. The new model has attracted interest from airports worldwide.

Paul became a board member last year and is also a member of the senior management team. The scope of her work is clearly extensive. How does she and the one other qualified lawyer in her team cope? ‘We outsource some matters to external law firms,’ she replies. ‘Nonetheless, as GC, I have to have a view on everything. The business will come to me for a view even if the advice has come to us from a prestigious City law firm. It’s a very privileged and interesting position to be in.’

The Excellence Awards judges praised Paul’s business acumen and, as she says, the ‘business’ comes to her for a ‘view’ on transactions. How did she develop her commercial skills? ‘I trained and worked in the City, qualifying in 1994. I had roles at CMS [now CMS Cameron McKenna Nabarro Olswang], Clifford Chance and Dentons (now SNR Denton].

‘I was in the Dentons international energy and infrastructure projects team for five years from 1998 to 2003, advising companies, governments and regulators on energy, corporate and commercial matters. It was an excellent grounding for becoming part of the business when I moved in-house.’

Why did she decide to move from private practice to in-house? ‘Like so many other women lawyers, I found the City culture of travel and long hours incompatible with being the mother of young children. It’s inconceivable nowadays, perhaps, but I was actually asked during an interview for a certain City law firm whether I had any health issues that might prevent me from working all night.

‘I told myself that there must be another way of working that doesn’t have impossible time expectations and doesn’t require you to travel overseas for a week at a time. And I asked myself: why must it always be long hours in the City? Is it bad project management or is it simply that it’s always been done that way? Do senior managers think that the culture of long hours was good enough for them so why shouldn’t the next generation of lawyers suffer in the same way?’

Paul tells the Gazette that, in her quest for more family-friendly employment, she first considered a job in government, which was how she came to take on an eight-month placement from August 2004 with the Office of Gas and Electricity Markets (Ofgem). Next she became the first in-house lawyer at international infrastructure company Delta plc before moving on, two years later, to her first role in transport.

‘I became a senior commercial lawyer at Transport for London (Tfl) for more than seven and a half years. I was the sole or lead adviser on construction contracts for the tube train network worth over £500m. And when Metronet Rail [an infrastructure company in public-private partnership with London Underground] went into administration, I was parachuted in to help.’ It was during her years at TfL that she first revealed her penchant for winning awards, in this instance two silver TfL awards for negotiating robust contract terms and a bronze award for ‘active and collaborative work to tight timescales’.

She joined LLAO in April 2015 as general counsel, winning the Excellence Award for Solicitor of the Year, In-house, last month.

It has been a long journey. Why did she become a lawyer in the first place? ‘My father told me that he would only pay for me to go to university if I studied something that would help me make a living when I graduated,’ she replies. ‘I considered the professions and law appealed the most. I was interested in how business works and how people working for companies go forward and develop their careers. Less obviously, while taking my law degree, I actually discovered an interest in taxation.’

What does the future hold? She works in a business with Europe-wide connections. The Open Skies agreement allows all EU and US airlines flying into the EU to operate in each other’s countries. The agreement currently includes the UK. However, Brexit looms and there are no World Trade Organization agreements governing aviation that the UK or any other nation can fall back upon. It is conceivable that following the UK’s departure from the EU, US and EU aeroplanes in and out of the country could be grounded. Does she worry about Brexit?

Paul responds: ‘The government has given us no transparency about Brexit, so for the time being it’s business as usual while we wait for a deal to be finalised.’