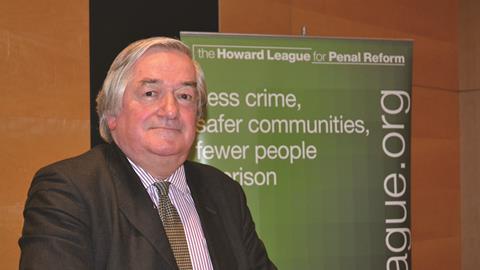 ‘I do not go so far as to suggest that age alone should immunise children from the appropriate application of the criminal law where there has been really serious offending,’ the High Court Family Division president explained. ‘However, in less serious cases it is legitimate to ask what advantage there is – either to the child, or to the child’s family or indeed to society at large – in invoking a criminal process in preference to a family court process, especially where the family court is already engaged in careful analysis of, and planning for, the child’s future.’

Munby’s radical suggestion came at the end of a lecture he gave to the Howard League for Penal Reform. He would not be drawn on which cases he regarded as less serious, but told me that this was an issue for society. ‘What benefit is society getting by sending children to enormously expensive institutions where the outcome is so unhappy?’ He noted that Peter Clarke, the chief inspector of prisons, had recently found youth custody centres to be so unsafe that a tragedy was inevitable.

Munby, 69, is in his final year on the bench – I have long tipped Lord Justice McFarlane, 63, to replace him – and his lecture had a melancholy, valedictory air about it. The various systems of justice that under-18s might encounter, he said, were ‘far too complex, far too little co-ordinated and serving far too many different and often conflicting objectives to be effective in furthering the welfare of children and their families’.

One problem was that cases involving the same child might be spread across several jurisdictions: family, criminal and tribunals. Another was that the High Court could not require a child to be given a particular care plan or other services. Responsibility for children was spread across too many agencies and there were serious shortages in provision for the ‘ever-increasing numbers of disturbed, sometimes very disturbed, adolescents’.

In Whitehall, Munby observed, there was no secretary of state whose title included ‘children’ or ‘families’. Responsibility was shared between seven government departments – which was why additional funding for the Family, Drug and Alcohol Court (FDAC) came to be announced last month by Tracey Crouch, a junior minister at the Department for Digital, Culture, Media & Sport.

But why stop there? According to Munby, we urgently need a ‘fundamental re-balancing of the family court towards what ought to be its true role as a problem-solving court, engaging the therapeutic and other support systems that so many children and parents need’. He thought it might also take over the criminal jurisdiction of the Youth Court, trying to grapple with the problems of disturbed teenagers instead of just locking them up.

Munby was gloomy at the prospects of government reform – as well he might be, with no word yet about whether the Ministry of Justice will get the Courts Bill it was promised in the Queen’s speech. Some of his reforms could be achieved by ‘cross-ticketing’ – authorising individual judges to hear cases relating to the same family in different courts. But the co-operation of other agencies was also needed: hence Munby’s plea for a new approach by the CPS.

Ministers might wonder what business this is of the judges. Isn’t it just another example of them going soft on young thugs? Shouldn’t family justice reform be left to the government? Not on the strength of two other reports published on the day of Munby’s lecture. One was an empirical study of how divorce law was operating in England and Wales. Led by Professor Liz Trinder and funded by the Nuffield Foundation, it found that 60% of divorces were based on ‘an often painful and sometimes destructive legal ritual of fault’ – the respondent’s adultery or behaviour – compared with 6% in Scotland. But there seems little prospect of legislating for no-fault divorces.

The other was about the effect of the Legal Aid, Sentencing and Punishment of Offenders Act 2012. The Ministry of Justice found that legal aid cuts had not led to an increased use of family mediation, as ministers had intended. In fact, the take-up of mediation information meetings had fallen by 61% while mediation starts had fallen by 44%. The government then set up a taskforce and made changes to incentivise mediation. Their effect was ‘minimal’.

Ministers could learn a thing or two by listening to the judges.