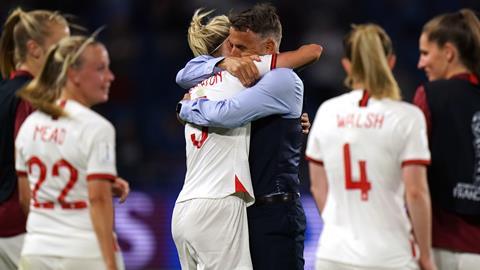 Today, at my gym, I overheard a group of men talking about football. ‘Did you catch the game last night?’, the conversation began. Football chat doesn't normally excite me. This one did. It was about the Women's World Cup quarter-final between Norway and England.

To borrow a phrase from the Law Society, which has been working hard under president Christina Blacklaws' tenure to promote gender equality, those gym-goers became 'male champions for change'. It was only one conversation. But it was a significant conversation. Gender wasn't mentioned once. These gym-goers talked about the game with the same enthusiasm as I've heard them talk about who was going to finish in the top four of the men's Premier League.

As much as I have found the gender equality events I've attended inspiring and encouraging, my heart always sinks when I see how few men there are in the room. Those in a position to bring about change are often men. If they're not in the room when the challenges and barriers to gender equality are being discussed, the room can feel like an echo chamber.

So it has been heartwarming to see the likes of the Society and the First 100 Years, a charity that has been charting the journey of women in law, do what they can to include men in the conversation. As part of the Society's Women in Leadership in Law project, Chancery Lane hosted men-only roundtables, one of which was attended by a rather powerful man in the legal profession, David Gauke, the lord chancellor. The agenda for the First 100 Years' flagship diversity conference always includes a male panel discussion.

The Society has helpfully published a 'Male champions for change' toolkit. It lists several suggested commitments, such as not taking part in all-male panels and ensuring work is evenly distributed.

It's not just in the workplace where men can champion change to support women in law.

Earlier this week, I saw Dame Victoria Sharp be sworn in as the first woman president of the Queen's Bench Division. The lord chief justice, Lord Burnett, shared a poignant story about the letter that Dame Victoria, when she was 12, received from her father (who was working in the US), encouraging her ambition to become a lawyer. Dame Victoria's father commented on her eloquence and said 'one day you might become a High Court judge'. Lord Burnett described this as a 'remarkable piece of foresight given that at the time there was only one woman High Court judge'. I describe it as a real-life example of a male champion for change, encouraging his daughter to follow her dream.

Men play a crucial role when it comes to promoting gender equality, whether they realise it or not.

This morning's gym conversation ended with my fellow sweat buddies trying to remember who is playing tonight in the second quarter-final. France v United States. And yes, they'll be watching it.