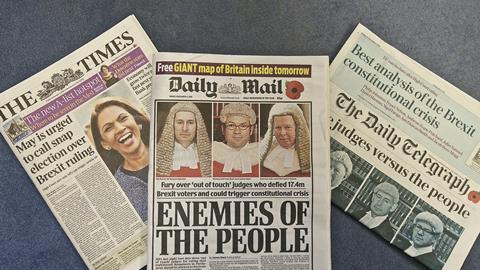 UN to the rescue of judicial independence?

Just over a year ago, three High Court judges had the audacity to do their day job and rule that the government could not trigger article 50 - i.e. formally begin divorce proceedings from the EU - without parliamentary approval.

‘Enemies of the People’, the Daily Mail famously declared on its front page, under pictures of the three judges in question: the then lord chief justice Lord Thomas, master of the rolls Sir Terence Etherton and Lord Justice Sales. The Sun reported that the judges had ‘overruled the nation’. The Telegraph featured the headline: ‘The judges versus the people’.

The lord chancellor, who was supposed to defend the judges, indeed had sworn to defend their independence, let them down with her slow and weak response. The onslaught became so bad that Lord Thomas had to ask the police for advice and protection.

If only the judges had turned to the United Nations for help.

In 1994, the UN Commission on Human Rights, noting both the increasing frequency of attacks on the independence of judges, lawyers and court officials, and the link which exists between the weakening of safeguards for the judiciary and lawyers and the gravity and frequency of violations of human rights, decided to appoint a special rapporteur on the independence of judges and lawyers.

The rapporteur can inquire into substantial allegations, and record the progress achieved in protecting and enhancing judges’ and lawyers’ independence.

I became aware of the role only this week, when I had the chance to speak to the latest incumbent, Diego García-Sayán, who was in London to speak at a Law Society event.

The rapporteur cannot recommend sanctions, but a public report on specific actions the government should have taken following the reactions to the article 50 ruling might have reassured the judiciary. (Assuming, of course, the rapporteur concluded that the government could have done more.)

As lord chancellor Liz Truss told the House of Lords constitution committee last year: ‘I will always speak out and say how important having an independent judiciary is, and have also said on these cases [the judges] are people of integrity and impartiality. Where I might disagree is with some who have asked me to condemn what the press are writing – I think it is dangerous for a minister to say “this is and this is not acceptable”.’

Who are you going to call next time judges are unfairly attacked? You could call the lord chancellor. I’m calling the UN.