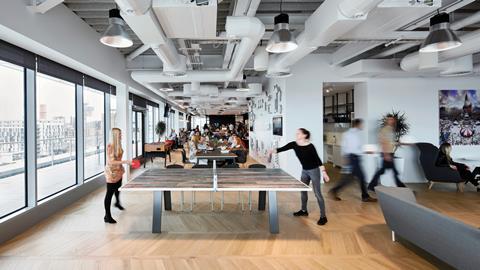 Architects report increasingly complex briefs for offices to house law firms. Can they deliver so that lawyers and support staff thrive in them? Eduardo Reyes reports

THE LOW DOWN
If you are unable to work out how to access an enticing-looking coffee shop, glimpsed through a plate-glass window, it might be because the ‘shop’ is the star attraction of a law firm that has had a makeover. But the design briefs now being handed to architects by commercial firms change much more than beverage provision. While 67% of law firms work in individual ‘cellular’ offices, new directions to architects are to keep these to a minimum and desks are not allocated to a single person. But the ideal is no free-for-all. ‘Pure’ open-plan is also being rejected, with more quiet spaces. This is driven by both cost and the expectations of those entering the profession – for choice in the way they work – and where – and for the office to have a tech‑like environment.

For anyone working in a commercial law firm that is impatiently sitting out an old lease, something will be strikingly different to a decade ago. The areas around desks will feel roughly the same – pictures of family and pets, and perhaps a box containing a favourite brand of bagged tea. The chair might have been ‘customised’ with a back rest and there will be some drawers in a unit. One of the drawers probably sticks a bit on its runners. Natural light is probably there in the more ‘open’ areas, but might come through a line of glass-walled partners’ offices.

What else? The main reception area may be designed to guide clients, rather than staff and fee-earners, to the ‘nice’ parts where there are boardrooms with a view.

What has changed is the number of desks at which no one is sitting. That will be as true for a firm that went ‘open-plan’ 20 years ago as for one that retained individual offices. Managing partners have always fixated on the cost-per-square-foot of their property, and with more flexible and remote working, and back-office work being completed in lower-cost locations, the layout and the footprint look expensive. If you are sitting at your desk and the managing partner comes around counting things, it is likely ‘change’ is on the way.

According to agents, CMS’s Cannon Place headquarters in London has 30% less space than its previous location but capacity for 15% more people. Freshfields Bruckhaus Deringer has 400,000 sq ft on Fleet Street, but with some of its operations now in Manchester, that will fall to 225,000 sq ft when it moves its headquarters to 100 Bishopsgate.

But speak to architects, and it is clear that in designing new spaces for law firms, the brief is not just about shoe-horning ‘hot-desking’ workers into reduced space. Architect Richard Beastall, whose practice tp bennett’s clients include Freshfields in Manchester, Macfarlanes and Travers Smith, says the design of modern spaces is ‘an enabler – it’s about productivity’.

And while the act of becoming open-plan is estimated by agents to produce a saving of 39% per fee-earner, the brief is not acres of closely-packed open-plan desks. ‘Ten to 15 years ago the “brave new world” was open-plan,’ Beastall continues. ‘[Now] the future is hybrid. Something more than cellular and more than open-plan.’

In law firms especially, there is ‘a lot of thinking and quiet working space’.

With the growth of in-house legal teams, firms are also competing with the culture and workspace of in-house legal departments and accountancy-linked law firms, for which a different way of working is normal – and potentially more attractive where it allows for flexible and remote working.

So while there is still a smaller footprint per person, and practices such as a ‘hot-desk’ policy are introduced for many, a portion of the space that is freed up by new designs is used for alternative spaces. Those spaces might support staff wellbeing or wider priorities. Beastall’s colleague Shane Kelly notes a key need for private space.

‘Mentoring is very difficult in large open-plan areas,’ he says, yet this process is deemed central to development in a law firm.

The demand for more flexible common areas is also driven by changes in the legal profession. A move to a sector-based approach for many commercial law firms means that in place of traditional departments, such as corporate or intellectual property, there is more team-working. 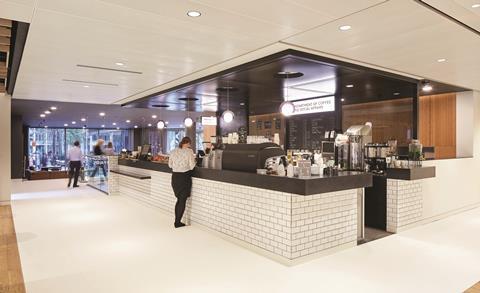 Where once it was safe to assume that a person sitting in a coffee shop with a laptop wearing a casual top worked freelance in a creative industry, they now might just as well be a full-time professional with a corporate brief. A contraction in fixed private workspaces, which has occurred as technology improves and flexible working grows, accounts for that. The coffee shop is also an alternative to a formal meeting room.

Recently refurbished law firms commonly reflect that change, with a catering outlet – such as a coffee franchise – centre stage. This has changed the entrance to some City law firms in particular – at some, the ‘coffee shop’ even mimics the coloured and mismatched furniture of the independent coffee shops found in Shoreditch or Borough.

Noticeably, high-end coffee vendor The Department for Coffee and Social Affairs closed its Chancery Lane branch, but runs a much larger coffee shop within City firm Macfarlanes two streets away – visible, but inaccessible to confused passers-by.

Other factors leading to office layouts evolving include changes in client behaviour and the expectations of people entering the job market for the first time.

‘There is a lot more informality with clients,’ Beastall says. ‘[Staff] can come in early to work.’

Hence a firm like Mishcon de Reya has a ‘business lounge’. The significance of clients, Law Society change consultant Holly Sorce tells the Gazette, is that many have already changed their offices to this way of working. They have areas designated as ‘drop-down zones’ and good WiFi; and hierarchies mix in common areas more often than was the case in the past.

Travers Smith had what managing partner David Patient describes as ‘a total refurb – although we started with a relatively modest project in mind, we ended up doing every nook and cranny of our estate’. A key decision was to have visitors see more of lawyers’ working areas. As Patient puts it: ‘As well as giving the buildings a cleaner, lighter, more modern look, and making the place a better environment to work in, it was all about collaboration and opening up the space to visitors.’

The biggest impact of changes in the design and practice, Sorce notes, is often on an organisation’s most senior people, who commonly experience the greatest loss of fixed, personal space.

‘Offices and desks [traditionally] confer a sense of status,’ she observes. That is true in any organisation, she notes – marketing, human resources and academia are no different, despite law’s more conservative reputation.

And then there are people close to the start of their careers that law firms want to attract. In designing Freshfields Manchester, Beastall says, the need was to create ‘the gravitas of London, while looking to attract the young and talented wanting a more tech-like environment’.

Technologists are increasingly important to the delivery of legal services, and competition to recruit them is fierce.

For that target intake, Sorce says, the expectation is that there will be ‘choice’ in the way they work and where they work, ‘which might be a desk, but it might also be a “pod”, their home, or the British Library’. Ways of communicating that are internet-reliant are also shaping the workplace – secure use of the cloud and products such as Skype for Business are now built into the design of new spaces.

But redesigning a space, and in the process the way people work within it and externally, is not straightforward. Sorce, who increasingly works with architects, says: ‘The architects I deal with are often very frustrated. Businesses [as clients] tend to want to dissolve responsibility and absolve themselves from it. But the architects won’t be using that space – they can’t successfully write their own brief.’

Involving people in the brief, and the changes in working culture and practice that will come with the new space, brings other problems. ‘With 10 partners in a firm it can feel like there are 10 businesses, [and] they are all spending their own money as owners of the business,’ Sorce says. ‘You need a strong coalition of sponsors around an agreed vision to make changes work.’

As an architect, Beastall says he would ideally want to deal with ‘the senior or managing partner, and representatives from across the firm – six people who can represent the firm, showing you value everything. Tech and accounting, for example – not just law and lawyers’.

A large move or refurbishment can prompt an internal discussion about a firm’s identity and values. ‘Wellbeing is a massive issue, even more prominent in lawyers’ offices,’ Beastall says. What is provided here, ‘depends on the personality of the firm’, he adds. ‘A small firm might still have an exercise room where a personal trainer can work. There might be a music or rehearsal room.’

Ideally, what emerges will be ‘co-created’, Sorce says, while also giving designers a clear steer.

The architecture critic Rowan Moore notes that no building, however well designed, is finished until people are using it. Some new recruits to law may have already worked in a ‘new’ way as students. Pearson Business School, which started offering law degrees in the past few years, is designed to mimic the modern office – with drop-down and coffee zones, and spaces to meet and work. When King’s College London refurbished Bush House on Aldwych, a project Sorce worked on, it was designed along these lines. 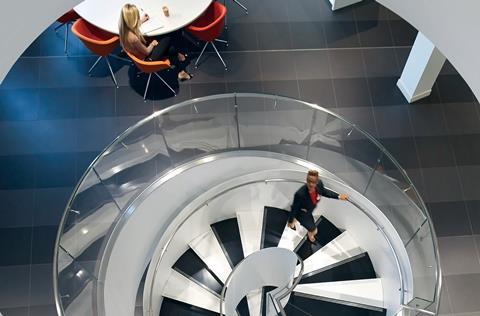 Even working with people who have that head start, this more ‘fluid’ environment needs to come with some agreed rules – etiquette – to work for everyone. At a basic level, that will relate to eating and tidiness. But it also relates to the way people work together.

The trend toward the instant messaging platforms that help govern a space designed along these lines creates opportunities for interruption of core tasks as well as collaboration. So colleagues need to use, and respect ‘do not disturb’ notices on Skype for Business, for example. There might be a booking system for desks so later arrivals are not penalised, though this is not always necessary. And, as now, it should be unreasonable when a message is sent at 3am to expect a reply by 8am.

Tone from the top is key in establishing ‘clear boundaries’ and getting the culture in a new office environment right. As Sorce notes: ‘Executive education is at the heart of this.’

To support this, the ‘open-plan [area] must be more appealing than the closed space’, Kelly advises. ‘Views and access to daylight,’ he adds, should be best in shared areas – taken away from remaining cellular offices.

Is the upheaval of a redesigned space worthwhile? It can be. Positive points might include the ability to stay in an area that the firm’s people value. As Travers Smith’s Patient reflects: ‘We all get to see much more of each other now. Overall, while there was a bit of dust and noise to contend with along the way, it’s been a real success. We love our location, next to Smithfield, and it gave us all a great bounce.’