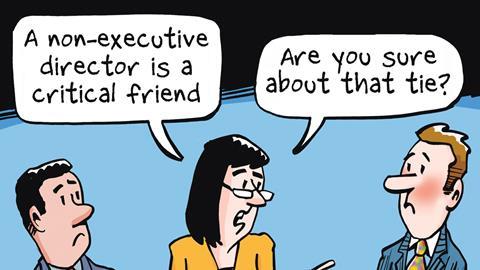 How to: be a non-executive director

Solicitors are well equipped to enter the boardroom, but what’s in it for them? Jonathan Rayner finds out.

Let us empathise with the average, overworked solicitor in private practice.

Our hero is tired, stressed and losing the plot when it comes to a satisfactory work-life balance. Now let us offer that person a responsible, time-consuming and poorly paid role on top of the day job, on the board of (for example) a local construction company. For good measure, let us throw in full directorial responsibilities, such as liabilities for lost money and assets.

It might not appear an overly tempting offer – yet solicitors are increasingly seizing such opportunities with both hands.

Lawyers are well placed to become non-executive directors of companies and organisations, both large and small. Some positions are well remunerated (think FTSE), so there will be one obvious reason to apply. But others pay modestly, while schools, further education colleges and smaller charities often expect the role to be performed pro bono.

So why do it? What do individual practitioners and their firms stand to gain? For that matter, what do the companies and charities get out of it? And, assuming you want to add to your workload, how do you set about finding a non-executive role?

Gillian Hall, a consultant in the Newcastle office of national firm Watson Burton, has practised as a corporate lawyer for 30 years. She is now a non-executive on several boards of directors, including Northumberland development company Arch.

‘You are there on the board as a critical friend,’ she says, ‘with “critical” and “friend” carrying equal weight. If you’re too friendly and just go with the flow, then you are contributing nothing. But if you are overly critical in an aggressive, tactless way you simply alienate people. You will sometimes have to say “Have you thought about…?” because you need to bring a fresh perspective through your role. But it is important to be positive, tactful and friendly.’

What prompted the move towards becoming a non-executive? ‘Around five years ago I decided to give up the day job, but still do work that was related to the corporate side of business so that I could use and broaden my skill-set,’ Hall says.

‘Being a non-executive director pushes you to develop your skill-set because you are both advising and making decisions. And being a senior lawyer is also an advantage to the company because you are more able than most to take in diverse information and put it across – to colleagues and clients – in a language that can be understood. You quickly become a valuable member of the board.’

Another non-executive, Lucy Winskell OBE, has a seemingly insatiable appetite for hard work. Previously a litigation lawyer for 28 years, she took a part-time master’s degree in business administration ‘to gain different knowledge’ and began building up a portfolio of roles, including at Darlington Building Society. She is also a former member of the Law Society Council, a former UK president of the Union Internationale des Avocats, and has served as UK chair of the British-American Project – a thinktank and international network for Anglo-US business and cultural relations. She is now pro vice-chancellor (business and engagement) at Northumbria University.

Why become a non-executive director? ‘Curiosity,’ she explains. ‘As a litigation lawyer, you are a “distress purchase”. You are brought to the board table to advise on a crisis. You are not there permanently. You are in and out, with – ideally – the bill paid promptly. I wanted to go further and gain a deeper experience of other types of business. I had already developed certain skills as a charity trustee. I’d also helped shape the strategic direction of a large body when I was a Law Society Council member. Now I wanted to really push myself and reinvent myself long-term.’

Fortunately, Winskell says, ‘lawyers are often in demand as NEDs. We are trained to think, probe and question. And we have a sixth sense when we might need to investigate something further. These are all good qualities to lend a company’.

Some lawyers serve on clients’ boards, but she believes it is best to keep clients and NED roles separate. ‘There is no irreconcilable conflict,’ she says, ‘and there are ways of managing the relationship so that everything is fine – until things go wrong. Why put yourself in the position where things could go wrong?’

When it came to looking for an appointment, Winskell recalls: ‘There was an advertisement in the local paper for the Darlington Building Society role. The Sunday Times carries advertisements, too, and there are specialist head hunters. Or someone who knows you might approach with an offer. But in my case, I have always applied for the job and then either got it or not.’

Tim Richards, who holds two very different non-executive positions, is a partner and head of the construction law team at Hewitson Moorhead, which has offices in Cambridge, London, Milton Keynes and Northampton. One of his roles is at a further education college.

He explains: ‘I had formed a portfolio of further education clients in the region, but it was an area I wanted to expand as I would only see a minute area of their business – usually when they had a large-scale project to construct new facilities. I approached a college to see if there was a vacancy on the board. I said I had some knowledge of the sector and also board experience at Hewitson Moorhead. I was interviewed and appointed.’

Richards’ business case for taking on responsibilities in addition to his partnership functions is that by sitting on the board he will improve his understanding of the sector. He has received training on how colleges are funded and governance issues. ‘I can now talk knowledgeably to other colleges,’ he says. ‘And five years on from my appointment, the moment I tell the principal of another college that I’m a non-executive director, I’m treated as one of their own, rather than as a solicitor pitching for business.’ 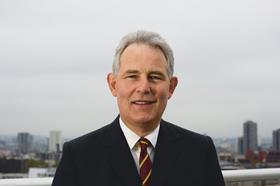 Former Allen & Overy senior partner Guy Beringer (pictured) is one of the founders of BCKR, a body that works with lawyers to help them identify and secure NED roles. ‘We aim to counter the stereotype of lawyers as simply advisers rather than decision-makers,’ he says. ‘We encourage our members to network for themselves rather than for the practice; and to emphasise that, as lawyers, they have experience of running complex businesses.

‘They are not valuable board members just because they can give free legal advice. They know about people management, training, recruitment, project management, delivering business services by IT, strategic planning and all the other challenges of running a company.’

Some members are seeking to combine their professional practice with non-executive roles, Beringer says, while others are embarking upon a ‘second career’ in company boardrooms. Beringer comes into the second category. ‘It is seven years since I finished my first career and I now have a mixed portfolio of roles, including chair of UK Export Finance, the Legal Education Foundation and City Music Services.’ He warns: ‘You can’t start preparing for your second career too soon.’

Richards adds that there is a ‘degree of altruism’ in his college work: ‘It’s giving something back to the community. Further education is a neglected part of the sector. Five years ago we were in the depths of the recession and the sector needed people with the practical skills to get it up and running again.’

Richards’ other role is entirely different. A keen golfer, he is on the board of the company that owns his golf club. There are several other directors, he says, all unpaid, but all carrying out the role with full directorial responsibilities. The company’s 400 shareholders could challenge the board if it omitted to do something that would have saved the club money, for instance, or if there were to be a health and safety failure.

‘There are a number of issues on which I can bring my lawyer expertise to bear. There is the question of selling surplus land at the right price and on the right terms, for example. I can also lead discussions with surveyors and developers. Hardly a board meeting goes past without legal queries to be answered. If necessary, I can seek advice from members of my firm. I can’t actually give legal advice during board meetings. All I can say is that I think the board should instruct solicitors for formal advice on a certain point.’

Richards concludes: ‘Being a non-executive opens up opportunities to meet people and broaden your network, with all sorts of business and professional benefits.’

Linda Lee, a former president of the Law Society, is the independent chair of Voice, the Northamptonshire-based victims and witnesses support service. ‘Crime is an area that I have not practised in,’ she tells the Gazette, ‘although I have interacted with victims in my personal injury and clinical negligence work. Voice is an opportunity to stand up for victims in a different way, not as a lawyer.’

She says that victims’ rights are not always respected: ‘Victims used to bring prosecutions, but then the state took over and victims became evidence. Since the 1970s, however, their rights have again come to be recognised.’ She sounds a note of caution for prospective non-executives: ‘The roles always take up more time than advertised. I could be kept busy full-time at Voice.’

Ben Moorhead, who like Richards is also a partner at Hewitson Moorhead (following the merger of Hewitsons and Moorhead James in July 2015), lends his corporate and commercial skills to a number of sporting bodies. In 2010, for example, he was elected to the committee of Kent County Cricket Club. Four years later, he became an independent director of the Clay Pigeon Shooting Association and a director of British Universities and Colleges Sport. He is also a trustee of Regain, a sports charity for tetraplegics.

‘There is considerable pressure these days for sporting bodies to adhere to good governance,’ Moorhead notes, ‘and that’s an area where my lawyer expertise can help.’ Is he paid for this expertise? ‘I don’t charge for my time at board meetings or for one-off pieces of informal advice,’ he replies.

‘But if a project needs doing, then I would use someone else in the firm and charge accordingly. Or if I’m the only person who could manage the project, then it would be me and charged at the usual rate.’ Would he urge other solicitors to become non-executives? ‘Yes. I’m constantly learning something new.’