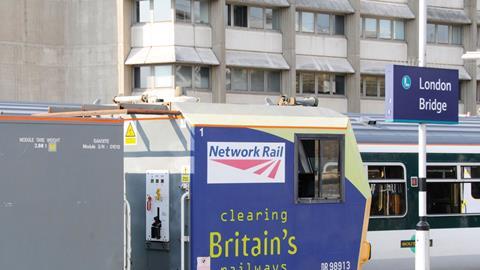 While the role of general counsel has transformed across the board, it is a truism that every such role, in every company – whether private, listed, regulated or public – is different. Certainly, the breadth of responsibilities has increased significantly and varies widely between organisations, as I know from my own experience.

This difference is driven in no small part by the needs of individual businesses, and the industry and environment in which they operate. However, the interests, strengths and skills of the general counsel also play a part – it is this element which I believe makes the role so endlessly fascinating and challenging. Once you have earned your stripes as general counsel, there are few roles that are then off limits if you have the drive and desire.

There are nevertheless some core common traits which I think are essential to being effective in a GC role:

Network Rail runs, operates, maintains and enhances Britain’s rail network, which includes 20,000 miles of track and infrastructure, 40,000 bridges and tunnels, and 19 major stations. It is also responsible for 8,200 commercial properties. Passenger miles are greater than at any time in the last 60 years, on a network of roughly half the size. It is the fastest-growing and safest railway in Europe. Passenger numbers have doubled in the last 20 years to 1.6 billion journeys in 2014. Network Rail moves 1.2 million more passengers per week than a year ago.

We work day and night to improve passenger journeys and to build a better railway for a better Britain. This means delivering a railway that is safer, more reliable and more efficient than ever before; one that will help build a thriving, sustainable economy.

There is still some way to go to create a railway fit for 21st century Britain. That is why Network Rail is investing more than £25bn in developing rail infrastructure between 2014 and 2019, to deliver more services and better journeys. This is the largest programme of sustained investment in the railway that Britain has ever seen.

To deliver its work of operating, maintaining and enhancing the railway, Network Rail employs around 35,000 people and also relies on a very wide range of key suppliers.

Network Rail was created in 2002 as a private sector not-for-dividend company limited by guarantee. It is obliged by its network licence to operate as if a listed plc. Due to a change in European accounting rules, Network Rail is now classified by the Office for National Statistics as a central government body. Network Rail is accordingly now firmly in the public sector. It became an arm’s-length body of the Department for Transport (DfT) on 1 September 2014. However, it remains highly regulated by the Office of Rail and Road.

Network Rail has always been something of a hybrid, occupying as it did the middle ground between a truly private or publicly listed company and the public sector. Since it was established in 2002, the DfT has had a strong role as customer and the government has always guaranteed Network Rail’s public debt. Network Rail operated a public member structure of 30–50 individuals who acted as quasi-shareholders to hold the board to account; they did not, however, have any financial interest in the company.

Since September 2014 the DfT has assumed the role of active shareholder. In mid-2015 the public membership structure was abolished and the DfT became the sole shareholder of the company. This recent change in status has been a fascinating and challenging journey for the company and for me as group general counsel. The relationship between the DfT and Network Rail is still evolving; however, the last year has provided a very clear view of the differences (and there are some) between the role of a general counsel in the private/listed sectors and the role of the general counsel in the public and regulated sectors.

How does the general counsel role in a regulated or public sector company differ from the role in the private sector?

At its heart, my role as group general counsel and company secretary at Network Rail is the same now as when I joined four years ago, when the company was a private sector (albeit regulated) company. And that role was also very similar to my previous role as general counsel at Premier Foods plc. The differences in roles are ones of degree and nuance rather than anything fundamental.

So, although the differences are often subtle they are real, and need to be borne in mind. I would categorise them under the following headings:

One of the main differences has been the role of the general counsel in relation to key external stakeholders. In a listed company, the role of the general counsel can involve a degree of shareholder interaction (and in my time at Premier Foods, with a substantial minority private equity shareholder, this was the case). But often this is the primary role of others, such as the investor relations director. In the regulated and public sectors, by contrast, the responsibility of engaging, building a relationship and interacting with major external stakeholders takes on a much greater significance. The relationships are more numerous and can be more complex.

The role of regulator is hugely important and influential, and the Office of Rail and Road was and is no exception. It acts as Network Rail’s economic, health and safety, and competition regulator. A close relationship with my opposite number at the regulator, and indeed other key individuals in that organisation, is important. Many in my senior legal team also need to develop strong relationships with the regulator as we navigate through a whole range of strategic and day-to-day issues.

Since Network Rail’s move to the public sector relationships with key individuals in the DfT (now our sole shareholder) along with other parts of government (most notably the shareholder executive) have also taken on material significance. Government as shareholder is too big for one person (the equivalent of the investor relations director) to control and be responsible for. Responsibility for maintaining a strong effective relationship and strong and open communication must reside with each of the executive committee and the board.

In my role as group general counsel, I take part in certain routine and ad hoc meetings in the meeting structure between Network Rail and the DfT. I have developed, and will continue to develop, strong relationships with those in key roles within the DfT and other relevant parts of government.

As a regulated company, Network Rail was already subject to a range of rail-specific legislation (both EU and UK) and of course it has to operate within its network licence. This layer of regulation has been added to materially since Network Rail became a public body. In addition to regulated compliance matters, the company now has to comply with the framework agreement (entered into between Network Rail and the DfT on reclassification) and, through this agreement, a whole range of government policies and procedures – the most notable being the principle of managing public money.

As a public and regulated body, Network Rail therefore operates within highly complex, numerous and at times inconsistent sets of rules and regulations. This matrix is, I would suggest, more complex than for a private organisation or plc. Navigating through it and ensuring compliance with this matrix is a significant addition to the role of general counsel, and indeed the wider legal team.

The board in a regulated company, its role and how it operates are not dissimilar to a board in a plc. The role of general counsel and company secretary in advising the board on governance matters is essentially the same. Having moved into the public sector, the board of Network Rail has seen the appointment by the DfT of a special director and the attendance of a member of the shareholder executive at each board meeting. Network Rail has taken on the status of a quasi ‘subsidiary’. This has led to subtle changes – and managing potential conflict, adjusting the role of the board and its directors to its new world, is a task that naturally falls to the general counsel.

In the private/listed world, a key role of the general counsel is to act as an interface between the chair and the chief executive, and to help manage the relationship between the executive committee and board so that governance is as effective and efficient as possible. Following the changes in Network Rail’s board and status, leading to a myriad roles and relationships, the ability to manage that essential relationship becomes ever more crucial.

Network Rail was already a company committed to becoming ever more transparent and open with its passengers and taxpayers. They already had a legitimate interest in understanding how we spent what was (even before we became a public body) essentially public money.

For Network Rail, as a company in a regulated industry the amount of internal scrutiny and review is extensive and on becoming a public body this increased.

Network Rail’s chief executive is the company’s appointed accounting officer, being personally responsible for safeguarding the public funds of which he is in charge and for ensuring ‘propriety, regularity, value for money and feasibility’ in the handling of those public funds. He can be called before the Public Accounts Committee to give evidence. This is in addition to periodically appearing before the Transport Select Committee.

In addition, Network Rail as a public body is now subject to the Freedom of Information Act 2000. In its first year, the company received in excess of 1,600 requests for information. Dealing with this degree of correspondence has demanded creation of a central freedom of information team that reports to the general counsel.

Of increasing importance in this world of transparency, regulation, oversight and review is my ability as general counsel to advise the company and the directors on complex disclosure issues.

The role of the general counsel in any organisation is challenging and stretching, but one of opportunity. The essential characteristics of a good general counsel hold true whether they work in the private, listed, regulated or public spheres. However, a notable difference in the public sector is the significant increase in the number and complexity of external stakeholder relationships which need to be managed.

l This is the latest in a series of thought leadership articles on the in-house sector. It is an edited version of a chapter in The Future of the In-House Lawyer: The General Counsel Revolution, published by The Law Society (£79).