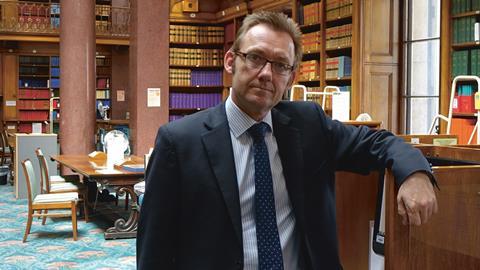 The Yorkshire solicitor is asked if he uses the Law Society library. ‘Never,’ he replies. ‘It’s too bloody far away.’ And there in a nutshell you have the misconception that head librarian Michael Maher (pictured) spends his waking hours attempting to correct.

That solicitor has happily embraced progress in the shape of emails, his smartphone and tablet, and his Skype conversations with a sister in Australia. But in his mind a library remains a big room with lots of dusty books, in this instance some 200 miles away.

‘All he needs to do is pick up the phone or email us,’ says Maher. ‘The team handles around 11,000 enquiries a year by phone or email. They come from everyone – sole practitioners, Clifford Chance partners, retired solicitors doing personal research. And there’s no such thing as a typical enquiry.’

Maher lists some of the more unusual enquiries, such as the client who – through an alcohol-fuelled mist – dimly recalls marrying a bar girl in Thailand while on holiday some years ago. History does not record whether the union was consummated, but there is certainly no wedding certificate. He has asked his solicitor: ‘Am I free to marry my British fiancée?’

Less sensational is the civil litigator who, mid-trial, realises he needs a certain precedent. He calls the library and, within an hour, has the precedent – and goes on to win the case. Or there is the commercial property solicitor whose client has the first and last page of a now obsolete 2001 Law Society form of lease, but not the pages in between. The library was quickly able to furnish her with the lease as it would have appeared in 2001. The deal was duly completed.

‘We handle enquiries from all over the world,’ says Maher. ‘So far this year we have had enquiries from members in Russia, Australia, Japan, Canada, Singapore and Israel. It doesn’t matter that we are located in London. We could be anywhere  and still provide the same service. Maybe we should change our name from library to information service.’

The Law Society library can save firms thousands of pounds a year with its free online research services, Maher says. ‘Access to LexisLibrary [for annotated legislation, cases, forms, precedents and commentary from Butterworths and Tolley] and to WestlawUK [for case law, legislation, legal journals, commentary and EU legal materials] is free from the library. Whereas a 50-partner firm could pay £100,000 a year for Lexis and £70,000 a year for Westlaw.’

He adds that the library is presently negotiating with LexisNexis to add sister software LexisPSL – for professional support lawyer practical guidance – to its online offering.

Maher says: ‘We calculate that running the library costs the equivalent of just two cups of Starbucks coffee per annum per solicitor. That’s good value in anyone’s book.’

The Gazette concedes that the library is a thoroughly modern operation, slick and cost-efficient, with information just a mouse click away. But there is no getting away from it: it is still a big room with lots of books. ‘We have 55,000 printed volumes, making us one of the most comprehensive collections of printed law materials in England and Wales [Oxford’s Bodleian Library is the biggest],’ says Maher.

‘It is currently a reference-only collection, but that might change. We are considering making some key texts available to members, such as Kemp & Kemp: Personal Injury Law, Practice and Procedure, which can cost firms more than £1,000 a year to keep up to date.

The library team dealt with 10,700 member enquiries in 2014, including research into point-in-time legislation, precedents, case law and parliamentary material.

Telephone and email enquiry lines are open 0900-1700, Monday to Friday.

‘In the meantime, as reference only, we have law reports for England and Wales, other British jurisdictions and the Commonwealth. We have legislation, precedents, journals and up-to-date practitioner textbooks. And we have House of Commons papers and Hansard debates from the beginning of the 19th century. We also have some irreplaceable historical documents.’

These include, from recent history, postcards from lawyers in prison camps during WW2 notifying the Law Society that Private Bloggs, whom they have been tutoring, is now competent in several areas of law and should be admitted to the roll. From an earlier conflict, there are Boer War medals that the Law Society itself awarded to members.

The library has a complete collection of Law Lists from 1775 until the late 20th century (the 1775 volume is kept under lock and key). Law Lists record every qualified lawyer in the country, giving their firm and other details, as well as the names of judges and other legal professionals. ‘They are used around seven times a month,’ says Maher, ‘by people researching what happened to a certain lawyer. They are particularly popular with retired solicitors trying to trace colleagues from 50 or more years ago.’

Maher, a career librarian who spent 18 years with Eversheds as head of information services, shows the Gazette the visitors’ comments book. Every comment is complimentary, apart from one which complains that the desk at which he sat was ‘wobbly’.

What plans for the future? ‘Our collection is so sellable, but let’s not sell any more of it – let’s display it and maybe even send it on tour,’ he replies. ‘And also, let’s work to make the library the first port of call for all solicitors.’